Brand looking for a comeback

Brand looking for a comeback 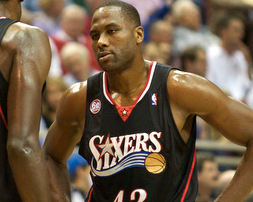 Elton Brand arrived a year ago in Philadelphia with a big contract, and even larger expectations. After signing a five-year $80 million contract, Brand could be seen on billboard all around the city. The 76ers were touting a Brand New Era and for the first time in a while, there was a palpable buzz around the team.

The Sixers were seemingly taking a gamble in Brand who returned to play just eight late-season games with the Los Angeles Clippers after recovering from a torn Achilles tendon.

Brand’s debut with the Sixers never came close to matching the considerable buidup. He suffered a right shoulder dislocation on Dec. 17 against Milwaukee, missed 16 games, played in six more before announcing that he would undergo season-ending surgery.

For somebody who has career averages of 20.0 points. 10.1 rebounds and 2.1 blocked shots, it was quite a departure.

“I have something to prove, absolutely, but it’s more to my teammates to (president an general manager) Ed Stefanski and the organization,” Brand said after modeling the Sixers’ new uniforms during a team promotion at the Wachovia Center.

Now a new season has arrived and Brand and the Sixers have taken a much lower profile, especially in a sports-crazed town such as Philadelphia, with the Phillies as the reigning World Series champions, the Eagles a contender for the Super Bowl and the Flyers being touted as a Stanley Cup candidate.

This is a team that didn’t make any shattering offseason moves as they did the previous season when they signed Brand and re-signed Andre Iguodala, spending about $160 million in the two deals.

So the Sixers are looking at Brand as something new, a much more effective and healthier version from a year ago.

Even without Brand for the majority of the season, the Sixers earned a second straight playoff berth. The Sixers exited in the first round last season, losing in six games to the Orlando Magic, the eventual NBA finalist.

The Sixers were highly competitive with Orlando, until Hedo Turkoglu hit a three-pointer with 1.1 seconds left in an 84-81 win in Philadelphia that tied the series at two games apiece.

While many Eastern Conference teams made significant upgrades, the Sixers’ best addition could be a healthy Brand.

“I’m excited to be healthy, to add what I can to the team,” Brand said. “Two first-round losses for a young team that’s OK, but I was brought here to get further than that and that is my goal and what I have been thinking about the offseason.”

The 6-foot-9 Brand is a two-time All-Star, but now entering his 11th season, he has to prove that he is durable an capable of reviving his career.

At 30, he is sort of a greybeard on this young Sixers team, that certainly has the ability to return to the postseason.

Lou Williams will step in at point guard for the departed Andre Miller, who signed with Portland as a free agent.

Iguodala, now entering his sixth season, could be a potential All-Star after averaging 18.8 points, 5.7 rebounds, and 5.3 assists in an NBA-high 39.9 minutes.

Forward Thaddeus Young, who just turned 21 in June, enters his third season as one of the bright young players in the game after averaging 15.3 points last season.

“When you roll out Elton Brand, Andre Iguodala and Thaddeus Young, you have three nice core players and then the others have to step up,” Stefanski said.

That is true, but in a strange way, Brand at this point is more of an unknown than Iguodala and Young due to his recent injury history.

Brand has worked diligently in the offseason and fully expects to resume his role as a highly productive NBA player.

At least Brand has passed the eye test this summer while working out with his teammates. He has spent countless hours in the gym, refining his game

“He’s been killing everybody out there on the court,” Young said of Brand. “Some days I don’t even want to guard him. It’s hard to guard him he’s so big and strong, makes all type of hook shots and turnaround jumpers.”

Stefanski, whose first major move as team president and general manager was signing Brand, says that Brand will enter this season 100 percent healthy.

“He looks absolutely terrific,” Stefanski said. “His body fat, body weight is probably as good as it’s ever been and as a doctor said to me, Elton looks like a prize fighter who is cut so well.”

So Brand is ready to make the fight and attempt to regain his status as one of the elite power forwards in the game.

For him, he hopes it truly is a new era in Sixers basketball, one that matches the hype from a year ago.