Ronnie Brewer: "If I don't get an extension, it's not the end of the world"

Ronnie Brewer: "If I don't get an extension, it's not the end of the world" 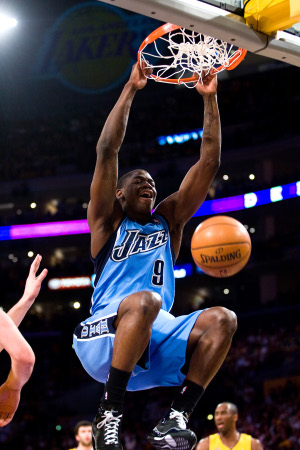 What was your reaction when you learned that you would have to travel all the way to Europe during the preseason?

Ronnie Brewer: It’s a great honor for me to be able to play in London and Madrid. Just thought it was a great experience for myself and the team to play against the Bulls and against this team (Real Madrid). And it’s good for the fans that they are able to experience the NBA throughout the world.

What is the toughest part of the preseason so far? All the flying or answering questions about Carlos Boozer all the time?

RB: (laughs) No, it’s good. The Carlos Boozer questions are not that bad. I just have a hard time adjusting to the different time zones. Salt Lake City to New York, New York to London, London to Madrid… I’m trying to get back on my sleeping schedule, but it’s your profession… You have to get used to it, be prepared, go out on the court and compete.

Do you expect to have a bigger role this season than the previous year?

RB: Hopefully it will be a little bit bigger. My goal is to improve and help the team in any way that I can. Just want to get better, like I think I did last year.

On the offensive end, do you think you’re the third option, fourth option…

RB: You never know whatever lineup we have in. We have a lot of guys on this team that can score a lot of points. Carlos Boozer, Deron Williams, Mehmet Okur, Paul Millsap… Ronnie Price can come off the bench and score a lot of points. Kyle Korver can knock them down. We have a lot of guys that can score. So it’s good for me to do my part. I’m going to play strong on the defensive end and on the offensive end, it’s going to come.

You’re starting on a playoff team and playing well, yet it seems you’re overlooked in the NBA. There’s not much talk about you. How do you feel about that?

RB: It’s good. Going into a game, there’s usually not much talk about me. So that allows me to go kind of under the radar and get into the offensive flow and get steals because a lot of people is not anticipating that I’m going to get steals. We’re a very good team and we have a lot of guys who are big-time players. For me just to be starting and competing on this team, that’s a blessing for me.

You have the possibility of signing a contract extension this month. How different is the season going to be for you having a new contract as opposed to going through the year without one?

RB: I prepare myself either way. You put the work in during summer time and get ready in the preseason. And when the regular season comes, you approach it like any other season. It’s not a lot of pressure. You just got to play basketball, perform well and hope for the best.

But you know, there’s guys out there, for example Andrea Bargnani, who was in your same draft class… He really has not played better than you in NBA and has already signed his extension. How do you feel when something like that happens?

RB: I think guys have different options in different situations. I can’t really focus on what other people are doing. I mean, doing that you’re always come with the short end of the stick sometimes. Like I said, you have to focus on how you can help this team out, play well and hopefully get that extension.

Are you optimistic it’s going to happen for you this month?

RB: Yeah, I hope it does. But it’s not the end of the world. Life still goes on. I can still step on the court, prove myself and compete on a playoff contender team. I like options.

If you had to convince a fan of the Utah Jazz that this season is going to be better than the previous one, what would you tell him?

RB: If you look at last year, we finished in the eight spot. We couldn’t have the same lineup for the most part of the season. Booz missed a lot of games, Millsap missed some games, Deron Williams missed the first 13, CJ Miles went down, AK went dow, Memo went down… We were like half a team, but at the same time we still competed. We still maintained the ship… If we’re healthy, we’re a very dangerous team. We can compete with anybody. We have guys 1 to 10 who can come on the floor and contribute at all times.

You very often have to guard some of the superstars in the league. Kobe, Wade, etcetera… Which is the toughest one for you to guard?

RB: I think they are all different in every aspect. LeBron is really tough to guard. Kobe Bryant, Dwyane Wade… They all do different stuff to score the basket. Kobe as a scorer has the most weapons on the court. He can shoot the three, hit the fadeaways and pass the ball really well. LeBron is just so strong and so good. They are are very different in how they do it, but they all have great talent, man.

Do you think you have a chance of playing for the U.S. team at the World Championship?

RB: You never know. Maybe if some guys go down…

If they ask you, you go?

RB: If they ask you, you have to accept. Hopefully if I continue to get better, they will take account of it.

You have only played for one coach in the NBA – Jerry Sloan. How many years do you think he has left as a coach?

RB: Man, I want him to continue doing it for as many years as he wants to. I know he does one-year extensions and still has passion for the game and he’s trying to compete. I don’t see him retiring that soon. 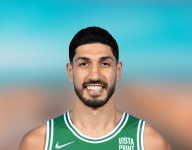