Paul Millsap: "Starting is not a big deal to me"

Paul Millsap: "Starting is not a big deal to me" 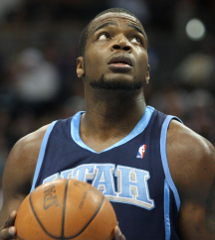 Did you get the contract you were expecting this summer or were you expecting a little bit more?

PM: It’s hard to say with the economy we’re at. I mean, the contract I got is great. I’m pleased with it. It’s more than what I expected I was going to get in the market we’re in.

How was the whole experience of being a free agent? Were you nervous during the summer?

PM: There was a little bit of that. It was a little frustrating. I was hoping it would be over pretty soon. But in the end it worked out on my best interests. So now I’m really happy and pleased with the situation.

Who has been the best player so far in the preseason?

PM: Deron Williams, he has come to play every day. There’s a couple of guys who have made major improvements from last season, including myself. You got Carlos (Boozer), Memo (Okur)… Everybody has come with a chip on their shoulder and well in shape.

Is the atmosphere on the team affected in any way by all the speculation about Carlos Boozer?

Do you feel ready to play more at the small forward position this season?

PM: Yeah, I think I’m ready for it. I’m capable of doing that, extending my game out to the small forward position. I think I will help my team doing that. But there’s still a lot of things I got to work on and get better at to do that.

You said this summer you were expecting to be a starter this season. Maybe that’s not going to happen. How do you take that?

You were drafted in the second round. I guess that had to give you extra motivation to succeed in the league. Is that right?

How was camp with the U.S. team the past summer? Did you enjoy the experience.