Shooting for that ring

Shooting for that ring 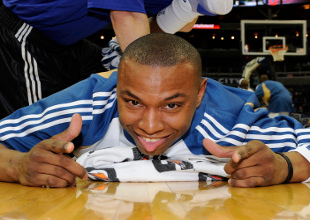 Since Gilbert Arenas no longer wants to blog, I guess it’s my turn now. You can read me here throughout the season with my thoughts on the Wizards, the NBA and more. So here were go. Hope you like it.

You know this has been kind of a different preseason for us in Washington. We had a coaching change and that obviously affects the whole thing. Besides, I see a more focused team this time around. I mean, this locker room is still unlike any other I’ve been in the NBA in that guys are real fun, we have a good time and root for each other. But it’s a little different from years past. I definitely think we’re a championship contender now and my teammates do too, so there’s a more serious approach to things that maybe wasn’t there before. Not as many jokes and laughs as in previous seasons.

The key thing for us is that we have all our guys healthy. Gilbert is showing more and more flashes of his old self. You have already seen that in our preseason games. Some days he’s been more of a facilitator, but against Detroit he was more aggressive. Can’t tell you which version of him I like the most. To me he’s a star and mostly and fourth-quarter guy. He can both create for others and then kill it in the last minutes. Either way, it’s great to have him back.

With Gilbert, myself, Jamison, DeShawn, Haywood, Mike Miller, Randy Foye, Oberto (nice pickup) and the rest of the guys, I think we have more than enough to compete with the big dogs in the East. Now we just have to get it done. Boston and Orlando would be great to beat, but you know I have a special place in my heart for Cleveland for putting us out all those years in the playoffs.

It’s a good rivalry we have with them, but there’s no actual hate. I wasn’t raised to hate nobody. I respect LeBron James and the rest of them. In fact, I speak with LBJ often. That said, I tell you right now that Mike Miller, whom I love, has to take those LeBron shoes off. That’s just not acceptable around here. You heard that, Mike!

I followed the offseason moves of other teams with interest. Everybody tried to get better. Atlanta with Jamal Crawford, Boston with Rasheed Wallace, obviously the Cavs with Shaq… And the Lakers getting Artest. He’s going to give them defense and rebounding and not just that because he’s a two-way player. It’s going to look good for L.A. if you put him together with Lamar Odom, Pau Gasol and the best player in the last decade in Kobe Bryant, who’s one of my closest friends in the league.

Anyway, I’m not scared of anybody. Look out for the Wizards. This is a big year. Guys came in the best shape of their lives and we’re really motivated to go out there and prove doubters wrong.

Talk to you soon. Bye! 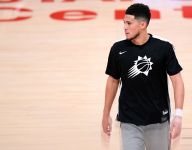