Rondo key with or without extension

Rondo key with or without extension 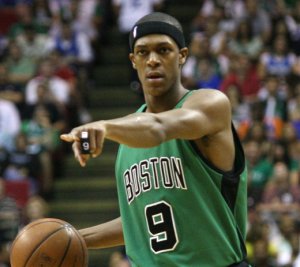 There’s a deadline looming in Rajon Rondo’s mind – and it’s not the one about which most NBA watchers are talking. It’s not about a contract extension for the slick Celtics’ point guard, who is beginning his fourth season in Boston. He claims that doesn’t occupy a single minute of his thinking.

“I gotta get ready for the season,’’ Rondo said. “I haven’t even given it (the extension) a thought.”

His nose did not appear to be growing as he spoke and, in fact, Doc Rivers said he has seen no evidence that a possible extension is consuming his point guard’s thinking. On the contrary, insists the Celtics coach.

“It has not been a distraction for anyone, not for him, not for us,’’ Rivers said. “And he has been sensational (in the preseason.) Look, it’s not exactly revolutionary for an NBA player to be in this position. It happens all the time. Rajon has handled it great and I think it will work out. It usually does. It’s rare when it doesn’t.”

The Celtics have until Oct. 31 to sign Rondo to an extension which would kick in starting with the 2010-11 season. If nothing is done, then Rondo would become a restricted free agent at the end of the 2009-10 season, with the Celtics still holding the right to match any offer. However, there is some risk in letting that scenario unfold because a number of teams have targeted the summer of 2010 for spending on prospective free agents LeBron James, Dwyane Wade and Chris Bosh. If they all stay put, the money might be redirected elsewhere (to, say, a restricted free agent point guard from Boston.)

Rondo certainly has made a case for a significant raise on the $2.6 million he is due to earn this season, an amount determined by the NBA rookie scale. (It is roughly half of what the Bulls’ second-year point guard, Derrick Rose, will earn this season and some $300,000 less than Jonny Flynn, the Minnesota rookie and No. 6 overall pick in 2009, will earn.) In three years with the Celtics, he has gone from being Sebastian Telfair’s backup (with even a DNP-Coach’s Decision along the way) to an almost indispensable member of arguably the best starting five in the NBA, inarguably on one of the handful of NBA teams with legitimate championship aspirations. And he has done it the last two years with no real backup.

But how valued? And how valuable? Those are some of the issues that the Celtics and Rondo’s agent, the estimable Bill Duffy, are trying to hash out by Halloween. The Celtics don’t see this first deadline as all that important, given that they can always re-visit the issue next summer if things don’t work out this week.

“I honestly think that he will be a Celtic for life,” Rivers said of Rondo.

Says Rondo, “You gotta live for the present. I can’t think too much about the future because nothing is guaranteed. You never know what might happen.”

While Rondo’s improvement has been dramatic – last spring, he became the only Celtic other than Larry Bird to have three triple-doubles in the same postseason – he still is only 23 (he turns 24 in February.) If, as Rivers suggests, Rondo is going to be a Celtic lifer, then Rondo might want to think about what a 2011-12 or a 2012-13 Celtics team might look like. Ray Allen, for instance, is in the final year of his contract, although he shows little sign of wearing down. Paul Pierce has two years left on his deal, Kevin Garnett three. All will be well into their 30’s and slowing down when Rondo theoretically would be hitting his prime.

There were rumors this past summer that the Celtics were shopping Rondo, despite his brilliant play in the postseason. The thinking was that Rondo, who can be either high maintenance or simply complex depending on your view, might not handle a big contract the way the Celtics would prefer. Both Rivers and Celtics GM Danny Ainge denied that was the case.

Ainge, after all, was the one who saw something in Rondo, trading a No. 1 pick to Phoenix in 2006 so the Suns would pick the sophomore out of Kentucky at No. 21 overall. And, it was Ainge, with the blessing of ownership, who refused to include Rondo in either the deal for Allen or the deal for Garnett, even if it meant the deal would fall apart. That’s how much the Celtics thought of Rondo back then. (Neither Ainge nor Duffy would comment for this article.)

The sticky part now, potentially, is putting a monetary value on Rondo. The top-flight young point guards in the league (Chris Paul, Deron Williams, Tony Parker) all make more than $11 million a year. Does Rondo deserve to join that elite trio? In all likelihood, this is where Duffy would like to see Rondo land. Or is the next level down (Jameer Nelson, Jose Calderon, Andre Miller, Mo Williams) more indicative of his worth? All of those gents make between $6 million and $9 million per. This probably is where the Celtics would prefer to slot Rondo.

The two gray eminences at the position, Steve Nash and Jason Kidd, both will pocket around $8 million each this year in the first year of new deals signed over the summer.

“The second contract you get is for what you have done in the league, and what you can do, even further down the road,’’ Rondo said.

Rivers has spoken warily in the past of the perils of young players looking for big deals and focused on things other than winning. He does not see Rondo in that category.

“The (second) contract that a player gets will be a good guideline as to where his career is and where it is going,’’ Rivers said. “If you are like Rondo, who will get a big deal, it’s because he has put the work into his game and he’s proven it. It’s good for him.”

Regardless of whether a deal is reached by Saturday, the Celtics’ plan for Rondo to be there, hopefully, in June when they raise another championship banner. And if they do, you can bet that No. 9 on the Celtics will have had a big hand in it.