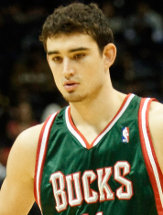 The old saying in the NBA goes, “After three years, you are who you are.” Some teams, though, don’t have the patience to wait that much time to get returns on their draft investments. Joe Alexander of the Milwaukee Bucks and JR Giddens of the Boston Celtics were some of the victims this week.

It’s probably devastating news for a young player… and with a reason. At least, based on history.

Research shows that first-round picks that didn’t get options of their first NBA contract picked up usually don’t last long in the league after that first deal expires. Probably not a big surprise, but these are the numbers…

Of all the NBA players drafted in the first round between 2003 and 2007, 24 became free agents sooner than expected after having contract options declined. Among that group, only eight remain in the league today. Those would be Marcus Banks, Antoine Wright, Shelden Williams, Patrick O’Bryant, Shannon Brown, Quincy Douby, Rodney Carney and Marcus Williams. Only Brown and Banks, who has barely ever played the past two years, have a contract in place for next season.

THE DECLINED 24: WHERE ARE THEY NOW?