Brandon Jennings: "I really don't try to compare myself to anybody"

Brandon Jennings: "I really don't try to compare myself to anybody" 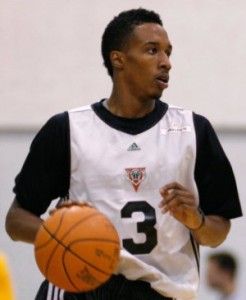 You’ve had an incredible start to your NBA career and came close to recording a triple-double in your first game with 17 points, nine rebounds and nine assists. Are you amazed by how you’ve gotten out of the blocks?

Brandon Jennings: I think it’s just the time I put in. Every day I come in and work with the coaches and show up at the arena early with coach (Kelvin) Sampson and coach Griff (Adrian Griffin) and I think that’s starting to pay off.

In your third game, you went head to head with Derrick Rose of the Chicago Bulls, arguably the best young point guard in the game, and more than held your own. How much of a confidence booster was that?

BJ: I think every night I’m going against somebody pretty good, not just Derrick Rose. I went against Rodney Stuckey (of the Pistons) and Louis Williams (of the 76ers) and they’re good point guards as well. Every night there’s going to be a challenge and you have to get up for it.

If you were a boxer, you’d probably be in the featherweight division. Being only 170 pounds, have opposing players tried to take advantage of small build?

BJ: Yeah, they have. Last night (against the Bulls), they were running a lot of pick and rolls on me. And, when I played Rodney Stuckey, who’s a big, strong point guard, he tried to take me down to the block and tried to put his body into me and tried to use his strength against me. I know there’s going to be a lot of players who are going to try and do that against me.

It’s hard to gain strength and put on weight during an NBA season, but do you intend on working on your body down the road?

BJ: I think I will in the summertime, I’m going to try and put on some weight. But right now, I like my speed. Some veterans now, like Lindsay Hunter (of the Bulls), are telling me to slow down young fella, slow down.

What’s been the biggest difference in playing in Europe last season and playing in the NBA now?

BJ: There are a lot more talented guys in the NBA; everybody is good. It’s harder to win an NBA game. You gotta to bring it for 48 minutes, and then after that game, you’re drained and tired.

You have been compared to a lot of different players, Allen Iverson, TJ Ford, Chris Paul, etc. Detroit Pistons coach John Kuester told me you remind him of Nate “Tiny’’ Archibald. Do you even know who Archibald is?

BJ: Yes, I do. I have heard of him. I just know he was a great left-handed point guard.

Who do you think your game resembles?

BJ: I really don’t try to compare myself to anybody. I’m just trying to make my name , my mark in the league. I’ll let other people do the comparisons.

Has the rookie hazing subsided yet?

BJ: No. I still got to bring in the doughnuts, I got to pass out towels, bring in the newspapers every day, carry some bags and things like that.

Is that getting old?

BJ: No, it’s not getting old. Really, it doesn’t bother me that much anymore.

In light of your impressive start, are your teammates giving you a little more respect and not just looking at you as another rookie?

BJ: I don’t know. It’s only been three games, so it’s still early in the season. I’m just working hard every day to get better.

Your head coach, Scott Skiles, was once a pretty good point guard himself. How often do you and Skiles talk about the point guard position?

BJ: Almost every day. We watch film before and after almost every practice. Sometimes, I’ll come in early to watch film on certain situations where I didn’t do good the night before.

Is there anything that Skiles has said that has really hit home with you?

You’ve only played a few games, but have you gotten into any trash talking situations?

BJ: I really don’t do a lot of talking when I’m out there playing. I just focus on trying to stop my opponent that night and leading my team to victory.

You have an assortment of tattoos on your body, including prominent ones on each of your arms. What do they represent?

BJ: On my right arm, it’s laugh now, cry later. It’s for all the haters who said I would never make it in life. And there’s a man holding a ball with a city behind him, which is basically me holding a basketball with my city behind me. On the left one, it’s my mom (Alice Knox) and my brother (Terrence). It shows I’m blessed.

In training camp, you said you didn’t think you’d win the Rookie of the Year award. But considering how well you’ve played, have you changed your mind?

BJ: I’m still not changing my mind. It’s only been three games. It’s too early. We still got 79 games to go. And, you know what? It’s not really one of my goals this year. One of my goals is just to get to the playoffs.