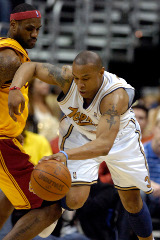 First off, to the fans who are a little down about the two straigh losses I have to say… Look at it this way: This season is going better than the last one. Yeah, that might not be saying much considering we’re coming off a 19-win year, but I’m feeling good about our prospects.

I’m not down about the losses or the injuries. My teammate Brendan Haywood was wondering the other day about our team possibly being cursed, looking at all the things we’ve had to go through. I have to disagree with Brendan. There’s no curse here. Stuff just happens. Especially when you’re a team that competes hard and plays with great effort, you’re going to have situations with guys going down to injuries. We’ve had a bad run health-wise, that’s true. But that can’t last forever. We’re going to have Antawn Jamison back soon and with the way Gilbert Arenas is playing, we’ll be good.

Gil said earlier this week that I needed to be more of a catch-and-shoot player in this system with Flip Saunders now in town. You know what? I’m going to adapt to any situation. If it’s about coming off screens, catching and shooting now, I’ll do that.

Like many other guys in the NBA, I’m big on tattoos too. I may not be a league leader there, though, because I have just four of them. The tat that means the most to me is the one on my left arm. It says “Rest in Peace, Kailo”. That’s my cousin who died in a car accident. She was like a sister to me. I grew up with her and although she’s no longer here, I keep her with me.

The most tattooed player on the team has to be DeShawn Stevenson. He had that much talked-about Abraham Lincoln tattoo on the neck this summer. That’s crazy to a lot of people, but not to me. I respect him if he wants to do that. It’s a way for him to celebrate what Lincoln did with the slaves. Myself, if I had to get a tattoo of a president, that would probably be Barack Obama. I’m a big supporter, but you probably know that already.

I feel bad about the Allen Iverson situation in Memphis. I just wish him the best. To me, he’s one of the best ever to play the game. Besides, he’s a really good dude. I’ve been in the NBA for a while and that gives you the chance to know a lot of guys. And he’s one of the guys that I really respect. I looked at him growing up because of the way he handled adversity, which in a way helped me handle my own. I saw what happened to him – getting incarcerated and then blossoming to become what he is today. I went through a lot of the things he had to go through, so he was an inspiration. I truly have a great deal of respect for him.

I’ll be back bloggin soon. Bye!