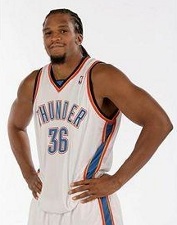 1. After various athletes verbally objected to Rush Limbaugh, Stephen A. Smith wrote in an article on CNN.com, “Since when did athletes have a political conscience?”

Has he forgotten about…

A. Steve Nash speaking out against the war in Iraq?

B. Adonal Foyle’s group Democracy Matters that is specifically dedicated to engaging young people in politics?

E. Josh Howard speaking against the war in Iraq and then President George W. Bush while still in college?

F. Former Cavs player Ira Newble leading an effort to obtain signatures on an open letter to the government of China regarding its investments and business dealings in Sudan – where hundreds of thousands have been killed and millions have become refugees in Darfur Province?

G. The dozens of athletes that made donations to the Obama campaign? Check the list.

2. The NBA has done a great job showing the positive things that athletes are involved in. (Kudos to David Stern). If it wasn’t for NBA Cares, most of the times we’d be shown just when we do something wrong. Why does negativity dominate the mainstream media and why is it so much more appealing to the public?

3. Why does the NBA, an almost 80 percent African-American league, constantly uses terms that reference slavery? Why are the CEO’s of the teams called owners? Why do they use the term “property” of a certain team when referring to a player’s employment? Why is the term trading block utilized? Why all the references to slavery, and why hasn’t anyone up until this point objected to this?

4. How disappointing is the feud between two basketball icons like Magic Johnson and Isiah Thomas?

5. Once the economy turns around, now that we have some decent leadership (sorry, had to throw that in), what will be the NBA’s argument to justify why certain teams aren’t making as much money as they feel they should be?

6. Would it be possible for the NBA to instill a rule for which reporters covering the league would be fined if they misreport, contort facts or simply write blatant lies? Are the fans not deserving of accurate, factual reporting, instead of articles laced with anonymous sources, embellishments and overall inaccuracies?

7. Has the dress code instilled a while ago made fans feel more connected, safer, more comfortable and whatever else the goal of implementing that rule was?

8. Why didn’t Paul Silas get another head coaching job?

9. Does anyone see it as un-American to not allow people to earn a living once they turn 18? I’m talking about the NBA age limit.

10. Can any doctor state to a medical certainty that injecting yourself with the swine flu/H1N1 vaccine will have no ill effects, repercussions or reactions in the near or distant future? Is there enough data on this vaccine for team doctors to attempt to force, no, strongly suggest that players take this?

11. While on the subject of team trainers and doctors, is it possible to impose a fine or forced firing when a team trainer or doctor consistently misdiagnoses numerous players? Not to call out any names but certain teams (not here with the Oklahoma City Thunder) employ trainers and doctors who regularly make medical mishaps (if that’s a politically correct way of saying it).

12. After seven players and the union went public and stood up to Rush Limbaugh, NFL Commissioner Roger Goodell was quoted as saying that Limbaugh’s “divisive comments ” had no place in the NFL.

“I have said many times before, we’re all held to a higher standard here,” Goodell said. “I would not want to see those kinds of comments coming from people who are in a responsible position in the NFL. No. Absolutely not”.

Colts CEO Jim Irsay said, “I, myself, couldn’t even think of voting for him… I’m very sensitive to know there are scars out there. I think as a nation we need to stop it. Our words do damage, and it’s something that we don’t need. We need to get to a higher level of humanity, and we have.”

Other owners had lukewarm comments about the possibility of sharing space with Rush.

Enter Donald Sterling, CEO of the Los Angeles Clippers, who recently agreed to pay $2.73 million to settle a federal case alleging he discriminated in the rental of apartments he owns. This settlement was described as “the largest monetary payment ever obtained in this kind of case by the U.S. Justice Department”. Sterling’s company was accused of targeting and discriminating against Blacks, Hispanics and families with children in renting apartments in greater Los Angeles.

After seeing seven NFL players, league commissioner Roger Goodell and Colts CEO Jim Irsay stand up against Limbaugh, I wonder… Who in the NBA will have the moral courage to publicly denounce Donald Sterling and his practices?