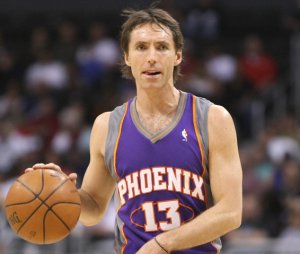 There still are some impressive names due to hit the free agent market next summer. We all know the Big Three: LeBron James, Dwyane Wade and Chris Bosh.

But one individual with some lofty credentials deliberately removed himself from the inevitable, frenzied, open marketplace: two-time Most Valuable Player Steve Nash.

His original, six-year free-agent deal with the Suns – you know the one Mark Cuban wouldn’t give him because of concerns over age, injury, durability and declining productivity – expires at the end of this season. But last summer, Nash and his agent, Bill Duffy, went to management and suggested a two-year extension, running through the 2012 season. The Suns agreed.

Why did he forego the free agent market, in which he participated and from which he cashed in during the summer of 2004?

“The option of waiting until next summer to be a free agent is totally speculative,’’ Nash said. “I don’t know what would have happened or what would be available. Here, I had an opportunity to play with a great group of guys I enjoy, to overcome a disappointing year last year, to turn things around. There’s a lot of reward in that. We may not be the most talented team in the league. We may not be expected to win a championship. But there’s still a lot to play for.”

Few looked at the Suns as one of the league’s more talented teams before the start of the season. Then they opened by matching the best record in franchise history (8-1) with Nash playing to his MVP form of three and four years ago. He’s already had games of 20 assists (Oct. 30 vs. Golden State) and 17 assists (Nov. 8 vs. Washington.) He helped hand the Celtics their first defeat with a double-double (16 points, 12 assists on Nov. 6 in Boston.) He became the Suns’ all-time leader in made three-pointers (Nov. 3 vs. Miami.) Two weeks into the NBA season Nash was leading the league in assists, shooting 54 percent from three-point range and, needless to say, a nearly flawless 93 percent from the line.

“He is still one of the top five point guards in the NBA and he has shown it so far this season. He has been phenomenal,’’ said Suns general manager Steve Kerr.

And with coach Alvin Gentry opening things up again on offense, you have to think Nash’s numbers and effectiveness will continue to impress. That’s good for the Suns, who will have him locked up at reasonable numbers ($11 million per with some deferrals) for the next two years, when he will be 38.

“The number one factor in signing that extension was that he’s 35,’’ Duffy said. “If he was 30, we’d be having an entirely different conversation. We would play it out for sure. But he likes the situation in Phoenix and ownership stepped up.”

They did indeed. Kerr said there was some “public sentiment” last summer urging the Suns to trade Nash. He admitted, “we got a lot of calls about Steve, trade-wise. The two lines of thinking were to either keep Steve and try to rebound from a lousy season, or sell high (trade Nash) and go young.

“To me, there was never a thought of moving him,’’ Kerr continued. “You just don’t move a guy who is that important to the franchise; he’s the face of the franchise. To trade a guy like that, who is still a helluva player, who is the heartbeat of the team, who brings in the fans to watch the team, I’m not going to do that. That’s crazy. He is going to help us.”

Kerr also believes that Nash’s days in Phoenix could go beyond the extension. He sees Nash as a John Stockton clone in terms of taking care of his body and looking for innovative methods to stay fresh. (Stockton played 82 games in his final NBA season, during which he turned 41.) There are summers, for instance, where Nash will rarely pick up a basketball, Duffy said. Instead, he will play soccer, cross-train.

“He definitely has found the fountain of youth,’’ Duffy said.

Kerr said, “Steve is such a freak of nature with his preparation in the offseason. During the season, he sits in a cold tub, like 52 degrees, after every practice and every game. He loads up on fruit. He knows how to take care of his body. Every summer he actively searches for ways to improve his conditioning. It’s plain to me, he’s going to be very successful for the next few years.”

Duffy also said Nash, who was born in South Africa and raised in Canada, has talked about playing overseas when his NBA days are over just for the experience. He said Nash, who has played in international competitions for Canada, could qualify for a British passport by virtue of family being born in England. (Sort of like Chris Kaman ending up playing for Germany in the Olympics.)

But those days are a ways away. Now, Nash’s focus is on the here and now and getting the Suns back to where they have been since he came to Phoenix – among the league’s elite. He’s the only MVP in NBA history to never have appeared in an NBA Finals and, in the minds of most, that is unlikely to change in 2010. Nash’s take? Dismiss him and the Suns at your own peril.

“This is a whole fresh start for us,’’ he said. “We have a lot of new players. Last year was basically a throw-away year with so many things thrown at us. We’re not really sure what to expect going into this season. So we’re just trying to find ourselves and try to be as positive and work as hard as we can everyday to get a little bit better.”