Maurizio Gherardini: "Bosh can play at these numbers for the whole season"

Maurizio Gherardini: "Bosh can play at these numbers for the whole season" 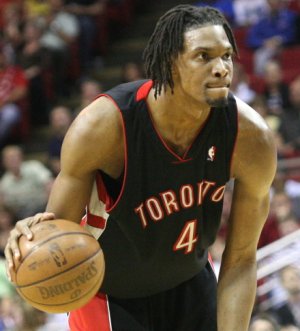 For readers that aren’t aware, what does your role of Senior Vice-President, Basketball Operations entail?

Maurizio Gherardini: Trying to assist the president (Bryan Colangelo) in pretty much every aspect of the life of a club, which goes from working on the recruiting side to the daily operations to strategies. And, actually, I also try to get involved as much as I can in whatever it takes in the marketing aspect. I try to be available for connections with sponsors, engagements, meetings. It’s 360 degree thing because you try to cover all the different aspects of the life of the club. Of course the boss is Bryan and you try to give him assistance, support and a different perspective every time you are facing a different situation.

Chris Bosh is off to a blazing start this season, putting up historical numbers. Do you think he can keep it up and what changes have you seen to his game this year?

MG: I think he can play at these numbers for the whole season. He has worked in the summer. He gained a few pounds of real muscle. He is comfortable with his more powerful body. He’s a good guy underneath the basket – now he likes to bang even more. He is trying to add a few fancy moves to his game, but I don’t want to mention the three-point shot – that’s not necessarily what I am talking about! The good thing about Chris is that he is working at his game. He wants to get better. He wants to get to the next level. So, the improvement is an improvement mental, physical, technical. And that is what he is showing right now. He is becoming more of a leader – more of a noisy guy, in the good sense of the word. He is becoming a better player and a better leader for the group. I think his commitment is very, very clear.

Do you expect any progress during this season in your efforts to re-sign him?

MG: I don’t see anything happening as the season goes along. And I don’t think he is the type of guy who wants to even talk about it. I think we all have the same goal – get the most out of the season and we want to be as successful as possible, no doubt.

What is a successful season in your eyes?

MG: Right now, I think, (with) a brand new team with all these things in work, I think we need to be realistic. I think it is a very balanced and stronger Eastern Conference. We need to realize that we need to get there. Making the playoffs won’t be easy for anybody. So, let’s get there first and we’ll go from there.

Another player who seems to have taken his game to the next level this season is Andrea Bargnani. What has the key to his success been this year?

MG: He also was able, beside the fact that he played for his National Team, to work on his body – to gain a few more pounds of muscle. Right now what is making the difference is the level of his confidence. He knows that now he can play against anybody and he can do what he knows how to do best any given night.

Is it more special for you to see his progress since you had a relationship with him in Italy (Bargnani played for Benetton for three seasons) and you both came over to the NBA at the same time?

MG: It’s always special when you know somebody from a young age. But, somehow, you have to try to understand – to appreciate – the picture away from on what it could be a personal feeling.  Right now we are trying to build the best possible team and he’s such an important piece and that has to be, myself, what we can appreciate. On the other hand, as Italian, we also have another important piece in Marco Belinelli and we’re watching the growth of Danilo Gallinari in New York. I think, from a perspective of having been an Italian executive, witnessing the growth of – the development at a better level of – all the Italian players in the NBA is a great feeling.

Does Toronto’s multiculturalism make it easier for players like Bargnani to adjust to life in the NBA?

MG: Toronto is a great place – it’s a great city. It’s not only a great organization, great ownership. I think it can compete with the best in the League. But on the other hand, like you mentioned, being such a multiethnic place makes the life adjustment for all the foreign players much easier because they get all sorts of support. Toronto is a very ‘hot fans’ city. The fans really follow you. They really try to give you as much as possible to be successful. At the end of the day, we don’t want to be recognized only as a situation where it’s the international team.  We’re not doing things based on a strategy (to get international players) – we’re trying to get the best possible players. If in any circumstance they are international, I think Bryan’s decisions in the past and creativity have shown that we’re not afraid to go the international route. We’re a team that wants to have the best possible team, whatever it takes. We don’t want to be tied up to a stereotype idea that we are just an international team. We are the best possible team we can put together.