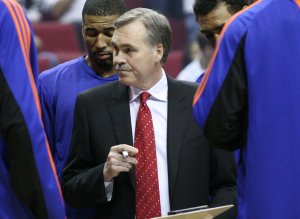 The New York Knickerbockers are playing with fire and it might continue to burn past 2010 if plans to renovate fail next summer. I give them credit for not signing Allen Iverson, but I sense they in turn will face the same fate when LeBron James, Dwyane Wade, Chris Bosh and Amare Stoudemire stay at home or land somewhere else next season.

They backed off Iverson for one simple reason: Mike D’Antoni did his homework by calling around to former coaches and that sealed the deal for a player that has failed to realize what is happening to him is not personal. It’s a message that his time at the top of the food chain is over. He is not first in line anymore. Although being the fourth, fifth of sixth option can still pay the bills, he would rather be sitting at home than play backup to a young player. Why did he think Jerry Stackhouse fought him tooth and nail his rookie year when Iverson took over 1,500 shots? This NBA is a young man’s game and when the Association feels like it’s time to move you to the backseat, you have two choices – put your seat belt on and let someone else learn to drive or get out.

I give the Knicks credit for understanding Iverson would not be the answer, but the same stubbornness Iverson exerts can best describe the organization and head coach Mike D’Antoni.

The Knicks are riding into the summer of 2010 with the belief that James, Wade, Bosh or Stoudemire will join the Knicks.

New York is the Mecca of basketball, New York is a endorsement extravaganza, New York’s nightlife is second to none, New Yorkers understand the game better than most, if you win in New York you are held in high regard throughout the basketball universe, etcetera, etcetera.

Those assumptions are correct if you win a title, but what New Yorkers must come to realize is that the draw of yesteryear is not here anymore. The Knicks got extremely close during the years of Patrick Ewing and since he left it has been a downward spiral. The idea of signing on as the savior and quite possibility facing the negative aspect of playing for the Knicks will scare any superstar – including LeBron.

These superstars also realize they will not win alone and that sucking up most of the salary cap will lock up the ability to put the right pieces around them. The Knicks, in their exuberance to cut costs, will probably lose the major talent they have in David Lee, thus leaving a star with a roster of question marks.

Why would LeBron or Wade want to leave an environment where the fans understand their minor shortcomings and where they have teammates who know how to give them the space they need to perform?

The only reason would be personal, but the scary scenario for the Knicks is that these two targets are as unselfish as they come and already have endorsements that will last a lifetime.

Bosh and Stoudemire are big-time possibilities, but they already play in an up-tempo system. Bosh is having a career season with arguably one of the top 5 point guards in Jose Calderon. Amare is playing with Steve Nash, who is the reason we talk about 7 Seconds or Less.

The Knicks have dug a serious hole in terms of perception. The only way out would be to change the type of basketball they play and prove to James and Wade that they have solid players to surround them in a system conducive to their abilities.

Maybe there would be a chance, but that depends on the Knicks other stubborn problem.

Mike D’Antoni is a very good coach, but his stubbornness in sticking with a system that is weak without Steve Nash, Chris Paul, Deron Williams or (oops!) Brandon Jennings will lead to failure. He needs to change and he has yet to give in to the thought. He has to recognize that LeBron and Wade like to lope and then explode. They don’t play fast constantly and they would struggle playing with guys who jack up three-point shots with 20 seconds on the shot clock. They like to facilitate and control the action and not being allowed to do so would cause major problems.

D’Antoni has a piece in Eddy Curry that could allow him to prove he can integrate a controlled offense.

Even the Phoenix Suns, who are back to the run-and-gun style, are only winning because they are not trying to run for the full 48 minutes. They are incorporating a good half-court offense, rebounding and focusing more on defense.

The Knicks will probably win less than 20 games this season and that is why D’Antoni should start showing that he can indeed become a more versatile coach. He has to realize that LeBron and Wade understand you will not win a championship if defense is not a focal point. He has to give them a glimpse of who they might be possibly playing with. Again, the thought of frustrated New York fans will strike fear in any great player.

I believe James and Wade will stay where they are and Bosh will become the Knicks’ main target. I love the growth and abilities of Bosh, but who wants to sign with a team knowing Knick fans will be irate and despondent over not adding James and Wade?

Donnie Walsh is one the most respected general managers ever, but I would really hate to be in his shoes next summer.