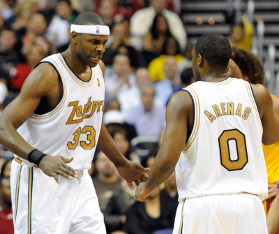 One of the most disappointing teams in the early NBA season has been the Washington Wizards. With the addition of new coach Flip Saunders, along with Randy Foye and Mike Miller from Minnesota, the Wizards were expected to seriously contend for a playoff berth after a 19-63 nightmare last season.

This hasn’t exactly gone according to plan for Washington, who began the season winning just four of their first 13 games.

In Washington’s case, the struggles could be pinned more on injuries, although one never knows how much the uncertainty of next year affects this season.

As for the injuries, Antawn Jamison missed the first nine games with a shoulder injury and the Wizards were 2-7 during that span. Jamison’s injury had the biggest negative impact on the team. Plus Miller is out with a calf injury and Gilbert Arenas, after playing a total of just 15 games the previous two seasons, has struggled to get into rhythm with a 1.54 assist-to-turnover ratio.

Usually when NBA teams don’t play up to par, injuries play a much bigger role than uncertain salary status.

Yet, having players approaching free agency is often difficult to deal with. Look at the saga that the Cleveland Cavaliers have experienced with LeBron James, wondering if he will go or stay.

Again, it may or may not have a big impact on a team, but it also can definitely be awfully annoying. With James, the Cavs are expected to contend for the Eastern Conference title and without him, they would appear to be a potential lottery team. So even if James has vowed not to talk about it, the subject will still be discussed frequently and his teammates will be asked constantly about it and it just creates a negative atmosphere. The same situation exits in places such as Toronto (Chris Bosh) and Miami (Dwyane Wade), just to name a few.

Last year, Andre Miller was asked almost on a daily basis about his impending free agency and all the trade rumors that accompanied him while he was with the Philadelphia 76ers. Miller’s teammates were also constantly asked about it and there was no denying that it made for an uneasy situation.

Then when Miller wasn’t dealt by the February trading deadline, the questioning turned as to whether he would be coming back with the team. Miller eventually signed with the Portland Trail Blazers.

Two of the most pleasant early-season surprises in the NBA this season have been Atlanta and Phoenix, who both won 11 of their first 14 games. One wonders it the Hawks will be worn down by questioning of Joe Johnson, an unrestricted free agent in 2010, or the Suns in addressing questions about whether Amare Stoudemire will exercise an early termination option.

Some would say that having so many potential free agents is good for a team since the players are performing for new contracts. However, sometimes a player may look to pad statistics instead of playing a team game. And NBA talent evaluators should be shrewd enough to see whether a player is competing to win or for a new contract.

In the NBA, talent obviously earns the big payday, but so does winning. A classic example is James Posey.

If one goes down the line, just about every top NBA team will have to deal with the questions accompanying potential free agents.

Good teams can’t use distractions about contract issues as an excuse but that doesn’t mean that it’s an easy situation to deal with.