Allen should be a keeper

Allen should be a keeper 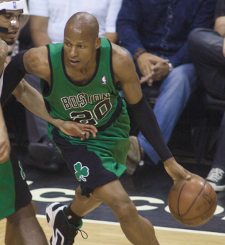 His name is on The List, right there with LeBron, Dwyane and the rest of the marquee 2010 free agents. Ray Allen might well be going to the Hall of Fame one day, but he’s also going on 35 (next July 20) and, statistically, is down in just about every offensive category.

So, time to trade him, right? Get younger, find a team eager to absorb an expiring contract and go from there. Amazingly, those scenarios were out there a few weeks back, offered anonymously, of course, and coinciding with Allen’s early-season shooting woes. They are as ludicrous now as they were back then. Ray Allen isn’t going anywhere – nor should he.

Why would the Celtics even remotely entertain parting with Allen, who has been everything they wanted and possibly more in his two-plus seasons in Boston? (My guess? They’re not.) He still demands coverage and respect, as he demonstrated last Tuesday when he blitzed the Bobcats for 27 points, knocking down five of six three-pointers. Prior to that game, he had been shooting 30 percent from three-point range (his career average is 39.7) and an even uglier 26 percent over the previous six games.

To that, the Celtics and Allen say, ‘so what?’

He’s been through these kinds of things before, most notably in the 2008 Eastern Conference semifinals against the Cleveland Cavaliers, where he couldn’t make anything. (He always contended he wasn’t in a slump but, rather, wasn’t getting enough shots.) He came out of it rather nicely against the Pistons in the conference finals and then had an excellent NBA Finals, making one of the signature baskets of the series, the blow-by of Sasha Vujacic at the end of Game 4, sealing an improbable Celtics come-from-behind victory. (He also had another memorable basket in that game, a baseline, under the basket drive for layup.)

Allen’s name did come up last summer in trade rumors, when the Celtics were supposedly gauging interest in Rajon Rondo. (The team’s general manager, Danny Ainge, denies they were ever seriously interested in trading Rondo, but other GMs swear the Celtics were listening.) To many teams, Allen would be a valuable pickup, but, in a testament to the times, the value would likely be due to more to his contract than his game.

Ainge has not divulged his end-game strategy for Allen, but it has to involve keeping him in Boston after this season. Originally, when the Celtics made the deals for Allen and Kevin Garnett, observers gave them a three-year window to win, primarily because that was the length remaining on Allen’s contract. This is Year 3. They’ve already won one championship and, after a four-game road sweep of Miami, Charlotte, San Antonio and Oklahoma City, are 16-4 and looking very much like they’ll be in the chase to the end once again.

That chase will have to include Allen. He enjoys being in Boston (who wouldn’t with the teammates he has?) and continues to show he is still effective. His son, Walker, is getting top-of-the-line treatment for juvenile diabetes in Boston at one of the great medical centers of the world. (There was a rumor over the summer that his daughter Tierra, a junior in high school, might move from South Carolina to live with her dad for the last two years of high school. Alas, that did not happen.)

It isn’t as if Allen has gone Kevin Costner on the Celtics or anything like that. He’s averaging 15.6 points a game and has an overall shooting percentage of 46.3. Only twice in his career has he bettered that; last year (48 percent) and 2000-01 (48 percent.) Doc Rivers is keeping the minutes down. Allen is still almost automatic at the line (93.3 percent.) He won’t be a candidate for the All-Defensive Team anytime soon, but, like Paul Pierce, has emerged as a top-notch team defender in the Celtics’ schemes, anchored and egged-on by the indefatigable Garnett.

“You never talked about Ray playing defense before he got to Boston,’’ said the Suns’ coach, Alvin Gentry. “He’s probably playing the best defense of his career.”

Also, there is no overstating Allen’s value in the locker room and as a mentor to the younger players, particularly Rondo. Allen made a point of taking Rondo under his wing two years ago and Rondo has been an eager and absorbent protégé (although he still can be an occasional handful.) Allen’s practice habits, his professional demeanor, his “every day is Groundhog Day in the NBA” approach to the grind of a season are all enviable (and not all that common) attributes.

Allen has expressed a desire to play beyond this year and keeps himself in excellent shape. Generally, in the NBA, the guards start to lose it first, right around where Allen is now. But I can easily see the Celtics re-signing Allen for two or three more years. Reggie Miller, remember, played very well and very competitively to the age of 40. There’s no reason to think Allen can’t do the same.

Garnett has two more years on his deal and Pierce, who can opt out of is contract at the end of this season, has one more. Either way, they’re both going to be around next year. There’s no reason to expect Allen won’t be with them, certainly not on the part of the Celtics.

Let LeBron and the others steal the limelight. Allen will be perfectly content to re-up and stay where he is.

And when he does, you just might want to keep that window ajar a little while longer.