Kenyon Martin: "If we lock in on defense, the sky is the limit for us"

Kenyon Martin: "If we lock in on defense, the sky is the limit for us" 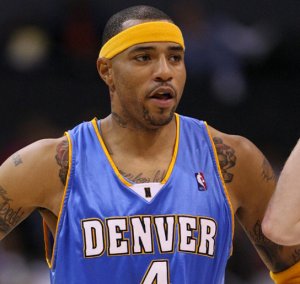 Your coach George Karl has said you bring an IQ to the game that is important to the Nuggets. Karl calls you the quarterback of the team’s defense. Could you talk about the defensive mindset that you bring to Denver?

Kenyon Martin: Everybody can’t score in the league and you have to be able to do something different. I have always been known as a defensive player, paying attention to detail mostly, helping with the game plan, how we should play pick and rolls or post up. I always tend to draw the assignment of the tough post player. I just try to do all I can to make sure we are successful.

Early in your career you went to the NBA Finals in consecutive seasons (2002 and 2003) with the New Jersey Nets. As a young player, what was that experience like?

KM: It was a great experience. We came up a little short. The team we put together in New Jersey and the way we were playing, it was just an exciting time. Even though we came up short, just getting there was fun for myself and the Nets.

Can the Nuggets earn a berth in the NBA Finals without making any deals?

What has it been like to see the continued progression of Carmelo Anthony?

KM: He works hard and when you work as hard as Melo does you have great results. He works extremely hard all summer long and during the season and I think he is trying to get us over the hump and he is putting his best foot forward. And we are all trying to help him because we’re trying to do it as a team. You can’t do it by yourself.

You have had microfracture surgery on both knees. Could you talk about how you were able to overcome such a difficult procedure twice?

KM: Just always focusing in. Knowing you are a part of sport, I just locked in and did all I could to make sure I did not let it get the best of me. It’s a very, very difficult surgery to come back from and I had two of them. A lot of people don’t make it back from the first. I have been blessed. The good Lord has blessed me to be mentally strong first and foremost. I just put my best foot forward with rehab and got my mind together.

You are still a double-figure scorer, but are scoring less than you did earlier in your career. It seems that you don’t feel you need to score in order to make an impact.

KM: That is true. If I have the opportunities to score I will take advantage of it but I try to do everything defense, pass and everything I can to make sure we are successful. If the opportunity presents itself that I have to go out and score a few games, I will. I am still capable of doing that, but I am just looking to make us a better team.