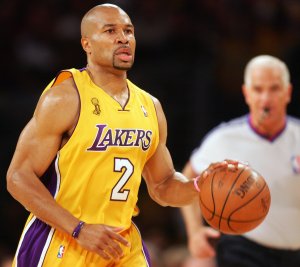 It’s easy to understand why Derek Lamar Fisher figuratively pinches himself sometimes and thanks his lucky stars for the position he is in today.

After all, when the veteran Los Angeles Lakers point guard entered the 1996 NBA draft, not too many people ever envisioned Fisher having such a lengthy and accomplished pro career.

Count Fisher among the skeptics.

After playing at tiny Arkansas-Little Rock, Fisher harbored reservations about whether he would even be drafted.

“Going into that draft, I wasn’t even on the draft radar with teams,’’ Fisher said. “But I worked as hard as I could during the pre-draft camps to just get on the radar.

“I went to Portsmouth, I went to Phoenix, I went to Chicago – all the pre-draft camps – to show what I could do.

“When the draft came around, I felt I would be very fortunate to possibly be drafted in the first or second round.

“I’m glad the Lakers made the call. My life and my career would have been quite different if (then Lakers GM) Jerry West and the staff had decided to go in a different direction.

“I was definitely fortunate.’’

The Lakers were equally fortunate. They drafted Fisher late in the first round, the 24th overall selection. They took him one spot after Denver chose Efthimios Rentzias of Greece and one spot before Utah chose Martin Muursepp of Estonia.

While Rentzias and Muursepp had cups of coffee in the NBA, Fisher has sipped champagne. He’s been on four NBA championship teams with the Lakers – 2000, 2001, 2002 and 2009 – during his 14-year pro career and could be on a fifth one this season.

While Fisher hasn’t come close to racking up Hall of Fame statistical type numbers like his current teammate Kobe Bryant – who, by the way, was drafted by Charlotte as the 13th overall pick in that same draft – or gained the notoriety of his teammates over the years, his colleagues fully recognize his importance.

“I think he’s sung,’’ Lakers coach Phil Jackson responded when asked if Fisher was perhaps the Lakers’ unsung hero. “I don’t think there’s anything unsung about Derek. He’s got a voice. He’s a leader of the Players Association and is definitely a leader among his peers.

“I think people overlook him at times on the floor as a basketball player, and that’s too our advantage.’’

Lakers veteran forward Lamar Odom concurs with Jackson. Odom said Fisher is held in high esteem by all the Lakers for not only his savvy, leadership skills on the court but his mature and influential presence as off it as well.

“He’s been on some great teams and he understands what it takes to keep a team together. Derek helps hold this locker room together.

“He’s a man of character. He’s a gentleman. He’s smart. If there’s one guy who you can learn from, it’s Derek Fisher.’’

One of the things the Lakers have learned from Fisher is his commitment to his craft. He brings a lunch-pail mentality to work every day.  He’s simply a guy you can rely on – as Jackson will attest.

The 35-year-old Fisher has played in every single game the last four-plus seasons. For those counting at home, that’s 354 straight games.

“He’s a stable person and that’s indicated in how he’s managed to play in all these games,’’ Jackson said. “Some of it takes luck and the other is preparation. He’s extremely well-prepared.

“In doing so, he uses his seniority in a positive light for our younger players.’’

So, what’s the secret behind Fisher’s admirable work ethic? What motivates him to play through injuries, injuries that often would shelf so many other players?

“I think it’s my natural and pure love for basketball as well as the joy of competition,’’ Fisher said.. “I can’t see myself, at this point, not being out there with my teammates and competing and trying to help us win.

“I would truly be sad and depressed if I couldn’t lace it up and put my uniform on and go out on the floor, especially with this team because we enjoy going to work together.’’

Fisher and Co. are certainly enjoying the fruits of their labor. They have busted out of the blocks this season, looking every bit as formidable as last season’s title team.

In fact, Fisher believes the current Lakers edition may eventually be better once they fully integrate Ron Artest, whom the Lakers signed during free agency over the summer, into their system.

“I think we’re capable of being better because we have another year of experience with pretty much the same players and knowing how to play with each other and getting the best out of each other,’’ Fisher said. “We’re still learning how to bring Ron into the fold and allow him to be successful within our team concepts.

“I think he’s still searching. He wants to fit in, and we want him to fit in. So, ultimately, we can be a better team than last year and have the same end results of being a champion again.’’