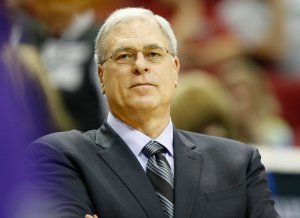 We’ll begin this one with an ancient line from Crosby, Stills, Nash & Young.

“We have all been here before.”

Damn, Phil Jackson is masterful. Well, most of the time.

He just happens to pick the world’s largest media market to launch his counter-attack. Jackson is the king of mismatches, whether it’s on the basketball floor, or in his media wars for control of a franchise.

In his pre-game chat with the media before the Los Angeles Lakers played the New Jersey Nets, Jackson casually floated the notion that he might not coach next year.

Oh, the stories that reporters have launched from that one.

The only problem is, Jackson was too coy to complete the equation for them. He identified his concerns and anxiety. He mentioned the state of the franchise, the success of the team, his salary, his feelings – all as factors in whether he returns next year as coach of the Lakers.

But he smartly left it to the media themselves to connect the dots as to the cause of his anxiety. Actually the math isn’t all that complicated.

Frankly, I began wondering about two months ago and trying to figure when the shoe was going to fall.

You see, the drama, or the latest act of the drama, actually began at the start of the season when Lakers owner Jerry Buss brought son Jim out for his yearly meeting with the media.

Jerry picked the moment to announce that he was stepping back and turning the franchise over to son Jim.

Think about the insult of that for the power couple of daughter Jeanie Buss and longtime boyfriend Jackson.

Let’s see, the California economy has been in a free fall, literally a disaster, for more than a year now. Yet, Jeanie Buss has brought in season-ticket renewals at something very close to a perfect one hundred percent. She has taken the traditionally cold and indifferent face of the franchise and made a warm, welcoming community in Staples Center. She’s there every night on the front row, greeting season ticket holders taking care of problems, making sure the team runs like a charm.

She’s been running the business and marketing end of the Lakers for years now, and in that time has gained a widespread reputation around the league for her business and media smarts. She’s one of the bright spots in a league dogged by recession.

She’s even managed to take the standoffish and sometimes arrogant Jackson and transform him into an endearing figure, all accomplished with the use of short snippets of offbeat video on the team’s webpage.

As for Jackson himself, well, let’s see. He’s fought off the ravages of bad hips and vascular troubles with his legs, not to mention the incapacitation of his longtime mentor, Tex Winter, with a stroke – Jackson battled through all those things to guide the Lakers to the 2009 NBA title.

So, in his one meeting with the media each season, Buss uses the occasion not to talk toast their accomplishments but to announce that he’s turning the keys to the machine over to Jim Buss?

Jerry Buss didn’t say a whole lot that day about daughter Jeanie and Phil, and his silence on their accomplishments speaks volumes.

Jeanie’s friends have been furious over the situation for some time now. They like to point out that Jim Buss didn’t even have an office in the team compound, that his big move has been to put his personal bartender on the team payroll.

As one Jeanie confidant explains, Jerry Buss is a misogynist who refuses to accept the idea that his daughter might ascend to run the franchise that he has owned for 30 years.

Buss made up his mind long ago that he was going to turn the franchise over to Jim. As Jerry West once explained of the team owner, “Once Jerry Buss makes up his mind, he normally doesn’t change it.”

Still, Jim Buss has been credited with making a series of moves five years ago that cost the franchise dearly, namely pushing for the firing of Jackson and the hiring of Rudy Tomjanovich as coach.

Jeanie’s allies insist that Jim Buss made that move without so much as consulting with anyone else, and Tomjanovich’s short tenure cost the team millions.

It’s no wonder that Jeanie and Phil are uneasy about trying to keep things headed in the right direction with Jim Buss in power.

Yes, Jim Buss was one of the voices in Lakers’ management that pushed for the drafting of center Andrew Bynum, but Jim has also played a role in the alienation of Bynum from Jackson and the team.

Although Bynum is signed to a long-term contract, his relationship with Jackson and the team remains a touchy issue.

Even though the Lakers sit atop the Western Conference and have nice momentum on their run to defend their championship, Jackson’s words fell, if not like bombshells, at least like mortar rounds in New York.

He told reporters that whether the Lakers repeat as NBA champions will be a big factor – but not the only one – in determining whether he returns.

“They have a great chance to be a very good team for a while, and Drew (Bynum) is locked in, and that’s a great start from the standpoint of putting a great roster together that has some commonality, that has played together, it’ll give them a real good basis,” Jackson said of the Lakers. “They have a couple other things that they have to get done and then I’m going to feel good about it.”

The Los Angeles Times reported the Lakers and Pau Gasol (who earns $16.5 million this season and $17.8 million next season) have agreed in principle to a three-year extension that will carry Gasol through the 2013-14 season. The Times also suggested that Kobe Bryant, who has the right to opt out of his contract at the conclusion of this season and become an unrestricted free agent, could also soon be in the fold long-term.

The news about Bryant and Gasol would seem to be great news for Jackson, the NBA’s highest-paid coach with $12 million annual salary and its biggest winner with 10 championships under his belt.

But Jackson said he will not decide on his future until June or July.

Repeating as champions would improve his prospects of staying, Jackson said.

“Oh sure, it really does. But it’s not a definite that I would continue even if we would be. If things didn’t go well and we didn’t win, that would obviously be something that would be, you know, you think maybe it’s time for someone else to look at this job and carry this team forward from there.

“That’s possibly not going to happen that way, but just winning it outright doesn’t mean it’s a natural to come back and coach this team. I just don’t see that as a natural thing. A lot of it has to do with the direction the league is going, the direction the ownership wants to go in. People are cutting costs all around the league, and coaches are obviously going to take a cut too, so they may not even want to hire me. They may want to save some money.”

When reporters asked Jackson if he would take a pay cut, he ended the session by saying, “Why would you?”

Longtime Jackson observers recognize the agenda he is setting. Indeed, we have all been here before, including:

• In 1998, when Jackson was coach of the Chicago Bulls, he engaged in a similar campaign with Bulls GM Jerry Krause, even as Jackson was driving the club to its sixth NBA title.

• In 2000, he conducted a smaller, more focused effort in dislodging then Lakers executive Jerry West from the franchise.

• In 2004, Jackson failed in a similar effort to get rid of star Kobe Bryant and was in fact fired by Jim and Jerry Buss.

Jackson, of course, was rehired by the team in 2005, and this time around he appears to have a much stronger relationship with Bryant.

Will Jackson be successful in reducing the role of Jim Buss and securing power for Jeanie and himself?

Lakers fans better hope the Buss family is smart enough not to escalate an internal power struggle for the team. That could quickly become a zero sum game.

As Krause, West and a long line of basketball experts have discovered, Jackson is central to the success of his teams, regardless of what conventional thinking suggests.

If Jim and Jerry Buss want my advice – and I’m pretty sure they don’t – they can save themselves a lot of grief and messy embarrassment if they’ll just sit back and chill, and let Phil and Jeanie take over.

Otherwise, it looks like Phil’s about to unleash another storm on the basketball world. Jerry and Jim Buss don’t want that. If they don’t believe me, they can just ask Jerry Krause.