Richard Jefferson: "We're not as tenacious as we need to be"

Richard Jefferson: "We're not as tenacious as we need to be" 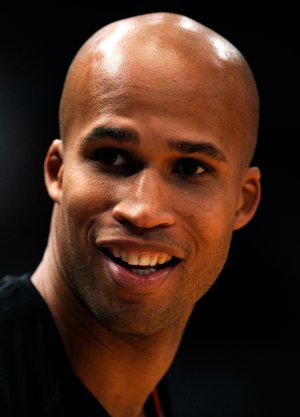 This is your first season in the Western Conference after playing eight years in the Eastern Conference with New Jersey and Milwaukee. What have you found to be the biggest difference between the two conferences?

Richard Jefferson: The biggest difference has probably been getting used to the schedule. What I was playing for New Jersey or Milwaukee, I knew you got Philly four times, and Chicago four times and so on and that you’d play the teams out west once or twice. Now I have to get used to seeing Utah four times and Portland four times and the other Western Conference teams more often. That’s something that takes a little time to get used to.

The Western Conference has generally been considered the more talented conference for years now, although some observers contend the East is catching up. Do you agree?

RJ: Who says that the East is catching up? The Lakers won the championship last season so, if the best team is in the Western Conference, the West is still the best and the power hasn’t shifted.

Where do the Spurs fit in the big picture of teams vying for a championship?

RJ: We fit right in there. Obviously, we’re not playing as well as we would like. But look at some of the other good teams. Boston is basically trying to fit in one new player in Rasheed Wallace. Cleveland, they’ve had their hiccups, trying to get Shaq to fit in. The Lakers, they have their entire group back and they’re just trying to fit in Ron Artest. Denver has all its guys back. Other teams, like Portland, have had injuries. Orlando, they’re fitting in one new guy: Vince (Carter). With us, we have a quality team that has three new starters (Jefferson, Keith Bogans and DeJuan Blair). We are a team that’s trying to get into a rhythm with all the new guys. We’re tentative. We’re not as tenacious as we need to be on either end of the court.

When the Spurs acquired you from the Milwaukee Bucks over the summer, there were many NBA officials and observers who felt you were the missing piece for the Spurs, that you made them legitimate title timber. Has there been a lot of self-induced pressure to live up to those expectations?

RJ: No, because I stayed humble. It wasn’t like all of a sudden I was walking around with a big head. I’ve been on teams that went to the Finals and I’ve also been on teams that didn’t make the playoffs, so I know that you need a lot of things to go your way. You need to hit a couple of magical shots. You need everyone to stay healthy. You need all those things to go your way. So I never looked at it like, ‘Oh, we’re going to win a championship now’ after I came to the Spurs. I knew it was going to take a lot of work. I also know that 30 games into the season, just because we’re not playing as great as we would like, that we’re not out of the mix with 50 games to go. We’re three games out of first place (in the Southwest Division).

Are you still adjusting to your new team, or have you already found your niche?

RJ: I think everyone is trying to fit in. Like I said, this is a new team with several new key players. DaJuan, Theo (Ratliff), myself, Keith Bogans, Antonio McDyess and then you have a bunch of young guys like Roger Mason and George Hill who have been here for only a couple of seasons. It’s a new mix of guys, so it makes things a little more interesting.

What was your reaction when you learned you had been traded from Milwaukee, a non-playoff team, to the Spurs, a perennial playoff team?

RJ: Whenever you get traded, you leave a little bit of your self there. I was over in the Bucks locker room (before Saturday’s game), saying hello to all the guys. We were not happy with our performance last year and we made a promise to each other to come (to Milwaukee) and work out together once a month during the summer. I was in Milwaukee in the middle of June working out and the reason I was there was to get better. Then, a week later, I got traded. But I think it shows a lot about the Bucks players, that last June they were working out and getting together because they wanted to have a good season this season.

You are playing for one of the premier coaches in the game in Gregg Popovich and playing with perhaps the best player in the last decade in Tim Duncan. What are your thoughts on these gentlemen?

“He (Popovich) is amazing. I had him in the (2004) Olympics and one of the random things I said then was that there were a couple of coaches that I’d really like to play for, Pop being one of them. Phil Jackson and Rick Adelman were some of the others. Those were coaches I admired while growing up and playing against them. I was always interested in how they went about things. And, then to get here with the Spurs, and to understand and see how Pop works has been amazing. A lot of the reasons why I was even able to come to the Spurs was because I think he believed in me and what I could do to help them.

As for Tim, he’s amazing, too. It’s ridiculous all the things he can do. As a basketball talent and a basketball mind, he’s probably the greatest power forward to ever play the game. He likes to keep a straight face and a focused attitude, but he’s very, very passionate about the game. He really loves it.

You had a tumultuous summer, being traded and then canceling your wedding at the last-minute. The tabloids and gossip magazines obviously had a field day with your situation. How upset were you with their coverage?

RJ: The bloggers, the internet stuff … It is really, really sad. There are a lot of sad things that go into those things. There’s a difference between responsible journalism and people that are trying to get the most amount of hits on their Web site. It’s sad. There are so many people who want to tell you how to live your life, but no one can live it except for you. It’s unfortunate that our society, with all those weekly tabloid magazines like Us Weekly and all the internet sites and bloggers, has come to this. It’s unfortunate that’s the state of our society.