And the Rookie of the Year is... Who cares?

And the Rookie of the Year is... Who cares? 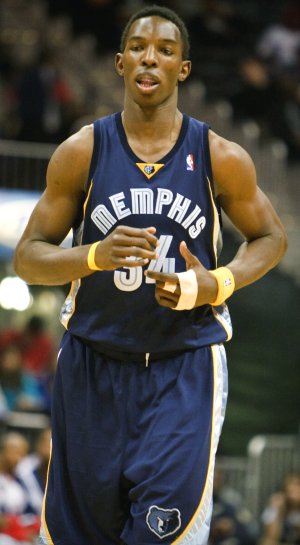 If you want to know who leads this season’s Rookie of the Year race, and who’s likely to stay ahead, the short answer is Sacramento’s Tyreke Evans.

If you want to know the significance, that’s another matter entirely and may not reveal itself for years.

Of course, Blake Griffin, who’s probably still the best bet to head this class up, hasn’t even taken off his warmups.

And, of the players we’ve seen, who’s to say the most impressive this season will have the most impact in the years to come?

Who’s to say one of them won’t be Hasheem Thabeet, the No. 2  pick by Memphis and now a semi-embarrassment to the Grizzlies, who took him ahead of Evans, Jonny Flynn, Stephen Curry and Brandon Jennings?

Take a look at the last 10 All-Rookie teams. Among the players who weren’t first team are:

Andrew Bynum, who didn’t get a single vote while Nenad Krstic made the second team.

Joakim Noah, beaten out for second team by Jamario Moon.

Chris Kaman, beaten out for second team by Udonis Haslem.

Leandro Barbosa, beaten out for second team by TJ Ford.

So it’s going to take longer than their rookie year to see who’s whom.

Significant or not, the rookie race has become a feature attraction on the big web sites that cover the NBA – which are almost the one media outlets covering the league.

In an age where great NBA writers like Sam Smith are allowed to take buyouts and wind up taking their columns to Bulls.com, we’re down to six NBA writers working for newspapers: Peter Vecsey of the New York Post, Mike Monroe of the San Antonio Express-News, Mitch Lawrence of the New York Daily News, Michael Lee of the Washington Post, Gary Washburn of the Boston Globe, and me at the Los Angeles Times.

With unlimited space, big sites like ESPN.com and Yahoo! have a different mission: capturing “eyeballs”– market share – in an era in which there’s still something called a “first-mover advantage,” even if ESPN moved first years ago, surging to the fore.

As opposed to the specialized sites like HoopsHype, RealGM, DraftExpress or 82games, the big sites are like a combination of reportage, however feverish, as on “SportsCenter,” and discussion, however contrived, on “ESPN2.”

To fill up the unlimited space, stay topical enough to lure readers, there’s ceasless chatter about things that won’t be decided for years.

Hey, we still don’t know how Kobe Bryant measure up to Michael Jordan, and won’t until Kobe’s done and we count up the titles.

Welcome to the Internet, the unending barrom argument.

Rookies have a prime position as a peculiar and interesting class and get a major promotional boost from the league, which runs rookie stats.

Of course, it’s not unusual for rookies to look like duds, like Memphis’ Hasheem Thabeet, now averaging 2.8 points and 3.2 rebounds, and to go on from there.

Reading ESPN’s David Thorpe for the first 10 weeks of Thabeet’s career it’s amazing he still has a career:

Nov. 26 – "It's hard to find something the Grizzlies can be happy about here. Thabeet has done so little for them on the court. But I watched him closely the other night and found something I'm sure they like: his attitude. And that's no small thing. Getting Thabeet's motor to run hot is an enormous challenge."

Well, that’s something, at least, he has a motor!

Dec. 9 – "Thabeet can improve in every area because he seems coachable. However, he is missing one ingredient that has me concerned about his upside: a motor that runs hot. Few players who lack what I call a ‘heartbeat’ develop that drive to dominate later in their careers.”

Oh, no, his heart stopped! That can’t be good, but, wait!

Dec. 16 – "After looking D-League-bound to start the season, Thabeet has played his way into the surging Grizzlies' rotation. In other words, he's ahead of schedule. He's fourth in blocks per 48 minutes among all NBA players, and his defensive- rebound rate ranks second to DeJuan Blair among all rookies."

His heart has started beating again?

With apologies to Thorpe for cherry-picking his stuff, the problem isn’t his analysis – it’s the gig which calls on him to make an informed judgment weekly.

If Thorpe did it the way NBA people do, or at least smart NBA people, he’d qualify everything with “It’s really early,” defer judgments – and it would read like crap.

As for the professionals themselves, there’s always a certain percentage of GMs and scouts trying to cover their rear ends, whose mantra is “We want someone who’s ready to contribute now.”

Of course, the test for the 2009 draft isn’t the 2010 Rookie of the Year Award, but next decades’s All-Star teams.

If you take a close look, as Thorpe has noted in recent reports, you’ll see him 18 in the league in rebounds per 48 minute, ahead of players like Al Horford, Gerald Wallace and Marc Gasol.

(Not that per-minute production is all the “Moneyball” stat guys think it is. If he only averages 12 minutes, that’s the most important stat. Trust me on this, mathematicians, if he was better, he’d play more.)

What the numbers do show is that Thabeet is keeping up with the play going on around him. He’s not way behind as he was in his first two seasons at UConn, and last summer in Las Vegas.

If you haven’t heard, he’s 7-3 and athletic, too. Even if he’s never much on offense, taking 10 rebounds and blocking two shots a game would make him someone a fifth grader could design a defense around.

Not that Thabeet will be any factor in the rookie race. As it stands today, here’s how I see it:

In other words, meet your Rookie of the Year!

Jonny Flynn – He’s so good, the Kings actually thought about taking him over Evans and starting to show it with Kevin Love back and less and less triangle offense, which minimizes what he does.

Brandon Jennings – Of course, he isn’t as good as he was in that incredible 55-point game but he’s very good. Passing on him was an incredible screwup for the Knicks, who needed a point guard and weren’t that high on Jordan Hill, whom they took instead.

Stephen Curry – Slight as he was, he looked like he’d be very good, if not great, and still does.

With his debut now pushed back to mid-January, it’s hard for people on the rookie beat to keep insisting he’s the best without any data to back them up, as in Thorpe’s Dec. 9 update:

"Based on what I saw from Griffin in college and summer league, I'm guessing he would be in the top four in terms of upside if he were healthy."

Based on what I saw in college and preseason, if they did this draft over, Griffin would still go No. 1.

So, forget about the T Mobile Trophy, Blake. Happily in the NBA, life goes on with or without it.