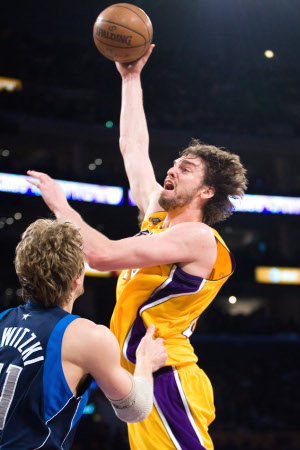 They slowly emerged on the NBA scene in the 1980s. They became mainstays in the 1990s. In the last decade, for the first time in league history, one of them became a Most Valuable Player and another became a Rookie of the Year. Two would earn Most Improved Player Awards and two others would earn Sixth Man Awards.

For the foreign-born players, whose sole basketball experience prior to the NBA had been playing in Europe, Asia or South America, this past decade was one of remarkable growth in both numbers and talent. At the beginning of this season, the NBA counted 83 international players on rosters from 36 countries. Dirk Nowitzki, the only German in the NBA, won the 2006 Most Valuable Player award. Pau Gasol, one of five Spaniards in the league, won the rookie honors in 2002.

Those two continue to excel to this day and are the starting forwards on my All-Foreign first team of the decade. I decided to exclude foreign-born players who played college ball in the United States. Thus, no Steve Nash (a lock for first team otherwise) and no Andrew Bogut (who wouldn’t have made it anyway.)

It wasn’t hard selecting the first team. After that, it got a bit dicier. One of the revelations: a lack of high-caliber guards from across the pond (or below the Equator.)

And it was hard to eliminate people like Vladimir Radmanovic, who nonetheless is still responsible for my all-time favorite story involving a foreign player. During the 2002 World Championships in Indianapolis, Radmanovic was kicked off his national team. He then proceeded to watch them play sitting in the stands, wearing his national team sweats.

At any rate, here is one writer’s take on the best foreign-born players of the last 10 years.

Explanation: There really can’t be a whole lot of debate about this unit, unless you want to use the traditional small forward/power forward configuration. While out of action this season, Yao has developed into, arguably, the league’s best center. And he did so carrying the weight of, oh, a billion people on his shoulders.

Nowitzki right now may rank as the greatest foreigner ever to play in the league – and we can only wonder what would have happened to him had Rick Pitino got his wish and been able to draft him in 1998. (Paul Pierce wasn’t a bad consolation prize.)

Gasol has helped turn the Lakers into annual title contenders. Parker and Ginobili each have three championship rings from the Spurs with Parker getting MVP honors for the 2007 NBA Finals.

Explanation: Those who have only briefly become NBA fans may need a refresher on the remarkable Divac, whose career spanned parts of three decades. He was a critical member of the Kings from 2000-2004 and, back then, Sacramento was really good, just not good enough to overtake the Lakers. He was a gifted passer; only three others in NBA history have amassed 13,000 points, 9,000 rebounds, 3,000 assists and 1,500 blocked shots: Kevin Garnett, Hakeem Olajuwon and Kareem Abdul-Jabbar. (Tim Duncan should join that group this season.)

Stojakovic was also a big-time player on those early 2000s Kings teams and has an All-NBA 2nd team selection on his resume from 2004. He remains one of the game’s most dead-eye shooters. Kirilenko has slumped lately, but his athleticism and quirkiness helped change the image of the tall, slow-footed, mechanical European big man. Kirkilenko remains the only player of this group to have made an All-Defensive Team. He actually made three of them, including the first team in 2005-06.

Turkoglu gets slotted as a guard here because, basically, he is one, despite his height. He cashed in on a big playoff performance in 2009, helped by a vintage Game 7 submission in Boston against the Celtics. Calderon is one of two players on my All-Foreign teams never to have been drafted. But he now is in his fifth season with the Raptors and is usually among the league leaders in free throws and assist-to-turnovers.

Explanation: As always, selecting the last members of the team proved to be a challenge. I can already hear the Luis Scola Fan Club (of which I am a dues-paying member) complaining. But Scola had only two years of NBA play this decade, so he loses out on that. But I love the guy. Ilgauskas is a great story, recovering from apparent career-ending foot woes to be a big part of the Cavaliers’ recent success. He’s been in two All-Star Games. Okur plays center on occasion, but, for purposes of this discussion, is designated as a forward. He has an All-Star Game appearance on his CV.

Diaw has stumbled a bit the bast couple of years, but he was a human Swiss Army Knife for the Mike D’Antoni Phoenix Suns in the middle of the decade, winning Most Improved Player honors in 2005-06. The never-drafted Nocioni gets in as a guard, even though he plays mostly forward. But he has guard size and he needs to be on this list, especially given the dearth of guards.

Barbosa, the NBA’s Sixth Man of the Year winner in 2007 (one year before Manu Ginobili won it) rounds out the team. He may not even be the best Brazilian playing right now (Nenê, Anderson Varejao) but, again, he gets the nod because of lack of competition for the position.

Scola and Nene were the two hardest. Varejao and Mickael Pietrus come next. Radmanovic, Rasho Nesterovic, and even Andris Biedrins might find their way onto similar lists. Just not this one. And the third highest drafted foreign-born player (after Yao and Andrea Bargnani) played most of the decade and didn’t even get remote consideration. That would be the underwhelming Darko Milicic, the No. 2 overall pick in 2003. Bargnani will get consideration for the next decade, along with Yi Jianlian, Rudy Fernandez, and, possibly, some guy named Ricky Rubio.