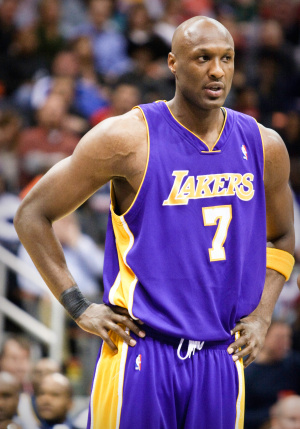 Although the Los Angeles Lakers and Kobe Bryant have gotten off to a strong start this season despite early injuries, forward Lamar Odom says there’s no question they miss triangle guru Tex Winter, who still battles the effects of a stroke suffered last April.

Odom says he has no doubt what the perfectionist coach would be telling the club.

And if the team had defensive breakdowns, the 87-year-old Winter would blame the troubles on improper offensive execution, Odom said.

That’s because the triangle, a team offense, is predicated on floor balance that always leaves players in position to get back on defense.

Winter, the longtime assistant and mentor to Hall of Fame coach Phil Jackson, is himself nominated once again for the Hall of Fame this year, after failing to gain election on numerous occasions.

It’s a system good enough to win 10 of the last 20 NBA championships, but is it good enough to get Winter elected to the Naismith Memorial Basketball Hall of Fame?

His nomination goes against the Hall’s formula for electing the game’s star coaches and players. Assistant coaches simply aren’t elected to the Hall of Fame, as longtime Celtics player, coach and broadcaster Tommy Heinsohn, himself a Hall of Fame player, explained.

But Winter’s career has broken the mold and merits special consideration, his supporters point out, largely because of the unique triangle offense and Winter’s ability to teach it and coach it.

Former Bulls GM Jerry Krause hired Winter, a veteran college coach who had great success at Kansas State and other places, as the “coach’s coach” in the late 1980s. Krause wanted Winter to teach his unique offense to Bulls head coach Doug Collins.

When Collins declined much of Winter’s advice, he was replaced by Phil Jackson, and the greatest coaching combo of all time was born. Working under Winter’s tutelage and using Winter’s offensive system, Jackson coached the Bulls and later the Lakers to 10 championships in 20 seasons, an unprecedented run.

Pro basketball had long been viewed as an undisciplined domain until it came to be ruled by Winter’s marvelously disciplined approach to team play.

“People don’t realize it’s mostly a zone offense,” Odom explained. “You overload one side, and you always have people in rebounding position. You just kind of pick your spots. It’s a pass-first offense. You just pass the ball to the open man and see what develops from there.”

Winter would be delighted to hear Odom discussing the triangle so authoritatively. Truth be told, Odom has never been all that well suited to Winter’s system.

Winter always said Odom is one of the finest humans he ever coached, and that’s saying something because Winter coached for better than six decades.

Still, as you might expect, Winter’s admiration never left him shy about lighting up Odom if the Lakers forward violated one of the principles of Winter’s system.

Over the past five seasons, Winter was often in Odom’s ear, sometimes fussing about one thing or another, or sometimes just talking about the game. But then the spry pioneer was silenced by a stroke last April.

The Lakers and Kobe Bryant are now moving through another season with hopes of defending the NBA title they won last June, and Odom says he can still feel Winter right there in his ear.

“Experience is the best teacher in the world,” Odom explained recently with more than a bit of tenderness in his voice. “He’d been around the block. And Tex always had stories for me. I miss his presence. We all miss Tex. A lot.”

Odom is a brilliant open-court player, able to operate instinctively on the break like only a select few in the world can do. Yet it says much about Odom that he’s willing to give himself over to system basketball with so little complaint.

Winter has long marveled at Jackson’s ability to sell modern NBA players on the merits of the unusual offense.

Then again, Winter has spent years in Jackson’s ear too. Winter not only provided Jackson the triangle offense and all of its various schematics, but the older mentor gave the younger Jackson the essential sets of drills and fundamentals for playing in his system.

Initially, Jackson provided a vision and an uncanny ability to relate to players and to build them into a team. But over the years, Jackson came to grasp the triangle and to teach it in ways that awed even Winter.

It became apparent that Jackson grew tremendously from their unique relationship and became the kind of coach who has dominated the game.

At every turn, there are regular reminders as to why Odom and today’s younger Lakers players keep plugging away at the different rhythms of the triangle. Odom got one such reminder recently when the Lakers visited Chicago, where Jackson and Winter coached the Bulls to six NBA championships.

Odom said he walked into the United Center and he was immediately left stunned when he glanced up to see the banners that the coaches won with teams led by Michael Jordan.

“I came in here, it was like I forgot,” Odom said. “I see like six championship banners? Then he won three more with the Lakers. I was like, ‘Wow.’ And then I was able to win one more with him last spring? And for me to be here in this presence?”

That’s not to say the versatile forward hasn’t had tremendous frustrations with the system. He laughed heartily when he heard that new teammate Ron Artest talked of the triangle as an impetuous lady who needs constant romance.

“You can call it that,” Odom said. “Romance is good. It’s always better when you take your time.”

That, of course, was part of Winter’s uncanny grand plan to keep the opponent off balance.

In seasons past, Winter has always been the guardian of how the Lakers play the game. Now, Jackson is moving through his first full season without his longtime mentor and assistant. The Lakers coach is also without top assistant Kurt Rambis, now the head coach for the Minnesota Timberwolves.

Odom says Jackson and the team have managed the way they always have.

“We’re always growing,” he explained, “and most people say they don’t change. But I don’t think we can help but change. I think it’s nature, you know?”

For example, the Lakers changed much over the course of the 2009 season, and that helped make them champions.

“P.J., he’s probably more outgoing, speaks a little bit more” now that Winter and Rambis are no longer around, Odom said, adding that Jackson also is now enjoying better health. “I know he feels better with his back and his legs and he’s moving around more. He feels good. He’s upbeat.”

Odom means that literally. Jackson still brings out his “warrior’s drum” and beats it for the team before every home game, a ritual that seems hard to fathom for some opponents in the NBA. The beating drum, according to Jackson’s belief, stirs the heart, just as it did for Native American warriors.

“He gives you that push, that pump that you always need,” Odom said of Jackson. “You want to play for and with the best.”

If it seems like Odom is extremely appreciative of where he is in life, he is. Lakers fans recall that he suffered through substantial off-season anxiety as a free agent before finally re-signing with the Lakers.

Where Jackson used to have psychologist George Mumford lead the team in meditation, Jackson himself now takes the team through these sessions. “Our energy many times is mental,” Odom explained. “The way we meditate with each other and stay poised, it feeds our energy.”

If the triangle and Jackson’s methods remain something of a mystery for the team, one thing does not — Bryant’s approach to the game.

“We know what he wants to do,” Odom said with a laugh. “He’s gonna come out and be offensively aggressive at all times. But he earns that. He earns that.”

Lakers center/forward Pau Gasol recently pointed out that he has to keep working the offensive boards because he’s only getting about five shots a game in the offense.

Some observers might take that as criticism of Bryant or teammates, but both Gasol and Odom say that’s not the case at all.

It’s more a testament to Gasol’s effectiveness and the efforts of opposing defenses, Odom explained. “Pau’s always prepared. You see him catch the ball and just go with that pretty left hook. He has an awesome array of moves and shots.

“Teams double Pau a lot,” Odom said. “We try to get him the ball as much as possible. When Kobe gets going, you got to understand that he’s going to stay aggressive, he’s gonna stay in the attack mode. Pau’s so versatile, so underrated as a rebounder. There are so many ways he can hurt a team in so many different. His passing. He hits me down low with passes all the time. He’s always around four or five or six assists a night.”

The situation itself reminds Odom of why Winter, who continues to battle the effects of the stroke at his Oregon residence, remains in his thoughts.

“There are always going to be nights where the defenses are going to take something away,” he explains, echoing Winter.

So it remains the job of the system and the team to produce another option, another way to succeed. That’s the way of the triangle, Odom explained.

Yes, the older coach always had stories for Odom, and it’s clear that Winter didn’t just train players. He also taught them to be guardians of the game in their own right.

In that regard, Odom has placed himself among the elite, because he’s always been the kind of guy to take the things that Winter said to heart.

Perhaps the people involved in the highly secretive Hall of Fame election process will finally do the same.