Chris Paul: "New Orleans is home for me"

Chris Paul: "New Orleans is home for me" 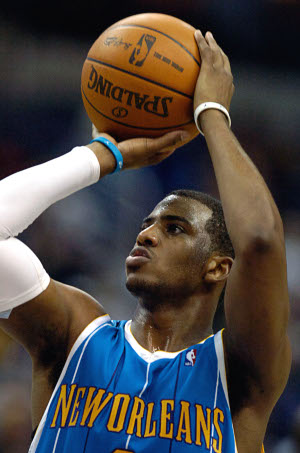 Could you talk about competing for a playoff spot in the Western Conference? It looks as if a .550 percentage may be needed to get in.

Chris Paul: Yea, it’s going to be tough. We’re playing with a lot of energy and have to figure how to put it together for 48 minutes.

Can the Hornets make the playoffs with the way the roster is constructed now?

CP: We can do it the way we are constructed right now. We have all the pieces. We have a great power forward, a great center.  Devin (Brown) is playing outstanding, Peja (Stojakovic) is tough. We just have to commit to the defensive end.

Do you relish role as a leader despite being just 24 years old?

CP: Yes, it’s fun. Me and D-West are two guys who have been here the longest. I was thrown into the fire my rookie year. I haven’t played a game in the NBA that I haven’t started. I’m not a 10-year vet or anything like that but I have played a lot of games. I accept the responsibility that comes with that and it means night in and night out I have to bring it.

Will the adjustment to Emeka Okafor at center continue to take some time?

CP: We are 30-some games into the season and the chemistry has to be there. It’s a little fine tuning. It’s too late in the season for us to say we have to find our rhythm. It’s time for that to happen. We know when we play hard and play together and when we do, we are tough to beat.  We have all the shooters and rebounders. I’m pushing it. We just have to do it. Sometimes it’s mental with us.

Do you feel there is a smaller margin of error game to game with this team?

CP: Most definitely. We probably don’t have the deepest bench within the league. We are pretty consistent who we will play night in and night out. What we have is effort. Guys go out and play hard. That is something you can’t coach or teach.

What is the key for the Hornets to have success?

CP: Defense. We are capable of it. When we get stops we are tough to beat. When we get transitions, ball screens, that is the NBA. Defense is so key for us on a nightly basis. The funny thing is that when you see us, we can do it, but we just have to commit to it every time. When we defend, you go on spurts.

CP: Defense is fun for me. You never want guys to score on you. I get frustrated if I blow a defensive assignment and I take pride in it. I am always trying to be a step ahead.

It must make you feel good for your role in helping basketball in New Orleans not only on the court but as an ambassador?

CP: It makes it exciting. New Orleans is a city that I love. They embraced me from Day 1 that I got there. It’s home for me and I love everything about the city and the city can use everything they can get.

You are signed for the next few years, with a player option in 2012-2013. Do you get tired of people asking you all the time if you want to get traded?

CP: Yeah. I’m good. This team here we’re capable of great things and we just have to stick to it.

You won a gold medal on the 2008 Olympic team. What was that experience like?

CP: The Olympics was great. It was the first time I had the opportunity to see what it felt like to be a champion. It really pushed me and motivates me because now I want an NBA ring.

Are there more Olympics in your future?

This year would be your third All-Star appearance.

CP: (interrupts) I have to make the All-Star Game first.

Assuming you do, I would think that it doesn’t get old being selected an All-Star?

CP: No, it would definitely be an honor and a pleasure. You look at the West, it is such a tough task getting in the All-Star Game. You have Chauncey Billups, Deron Williams, Tony Parker, Steve Nash, Kobe Bryant, Tracy McGrady (laughs) you can go on for days.

Can you talk about your first All-Star Game in 2008, played in your city. You had a great game with 16 points and 14 assists.

CP: That was pretty special because that was my first All-Star Game in New Orleans. We lost, though.

What player is hardest for you to defend against?

CP: Probably guys who are as quick as I am. A ballhandler. In this league if you are guarding a good ballhandler, one guy can’t defend him, it takes two. There is too much open space on the court. If it’s a guy who can really handle the ball well, you can’t guard him I don’t care who you are.

Is there really anybody as quick as you?

CP: Tony Parker, D-Will, those guys are guys who are hard to stay with unless you have help. If you put me on the court with one person, in every game we play if I am pushing the ball and I see their big man is not backing in help mode, now I can go at it. The guys are too good with the ball in the NBA. The three-point line is so high that it’s spacing the court up. You have to have some help.