Where have you gone, Reggie Harding?

Where have you gone, Reggie Harding? 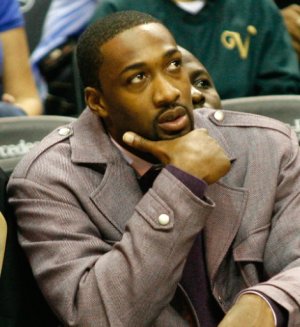 Gilbert Arenas has got to be sick about the recent troubles he’s found with firearms and poker hands. All of a sudden people are treating him like Adolf Hitler.

Yes, he’s been short-sighted, but he’s hardly a lone figure in the history of American basketball.

I suspect that the level of ostracizing he faces has much to do with his contract that is worth better than $100 million.

With that level of money, he should have been very, very careful. But in some ways it’s understandable that he made light of the issue after he was confronted with it. After all, that’s how the basketball world has traditionally treated the issues of guns and gambling.

Over the years I’ve interviewed many of the game’s old timers and former legends. They’ve all joked about the issues in interviews I’ve done with them. That’s because gunplay and gambling are as old as peach baskets and balls with laces.

Truth be told, the problem is common. Years ago I had a gun shoved in my face during a pickup game gone wrong. Anybody who’s played on America’s public courts for any length of time has probably encountered similar experiences with guns.

From its earliest days in the YMCA gyms, basketball quickly became known for its emotional outbursts and ensuing fistfights. That’s why gyms often banned the playing of the sport in the early days. Take all the emotion of the sport and throw in a little hustling and it’s easy to see how people end up getting shot.

Even though gambling and guns are serious issues, that doesn’t mean that pro basketballers haven’t traditionally made light of them.

Take, for example, the strange tale of Reggie Harding, gun-toting character who inhabited the margins of the game.

The Chicago Bulls lost their first nine games in the fall of 1967, won one in Seattle, then lost another six. Desperate to shore up their weakness at center, the Bulls pulled in 6-11 Reggie Harding from the Detroit Pistons. One of the first players to move directly from high school to the pros, Harding had been suspended for the 1965-66 season. Sadly, he had been raised on Detroit’s mean streets and could never overcome his gangster background. (He would be shot to death in 1972.) He was known for finishing practice and leaving without showering, pausing only to towel off and spin the cylinder on his revolver. Once while playing in Detroit, Harding was said to have shot at teammate Terry Dischinger’s feet to make him “dance.”

One night Bulls roommate Flynn Robinson awakened in the dark, cut on the light and found Reggie pointing a gun at him. Legend has it that Harding robbed the same gas station three times in his own Detroit neighborhood. According to Kareem Abdul-Jabbar, the third time a masked Harding robbed the place, the attendant said,  “I know that’s you, Reggie.”

“I got a chance to get Reggie Harding,” the late Johnny “Red” Kerr once told me of his days as coach of the Bulls. “We needed a big center. I had heard about his pistol. Rumor had it that he carried it in his gym bag. . . He’d play one-on-one with Flynn Robinson. Flynn would beat him, and Reggie would say, ‘Get out of here Flynn before I pistol whip you.’ Everybody figured he might have it with him.

“When we were in the midst of that losing streak in 1967-68, we played the Lakers in Los Angeles,” Kerr recalled. “We needed a win in the worst way, and we had a one-point lead with just a few seconds left on the clock. The Lakers got the ball at half court, and I put Reggie in to guard Mel Counts, their big guy. I didn’t want them getting an alley-oop. Counts set up out near the free throw line, but Walt Hazzard, who was taking the ball out of bounds, threw the ball over the backboard and the buzzer sounded. I was jumping around and screaming because we had finally won a game. I looked up, and Reggie had decked Mel Counts. Counts got up and shot two free throws and beat us.”

During that West Coast road trip, Harding was called home for his mother’s funeral. For the next 10 days, the Bulls didn’t hear from him. Finally he returned, saying that he had been appointed executor of his mother’s estate and needed the extra time away. A few days later, the Bulls placed Reggie Harding on waivers. It seems the gun had only a little to do with it.

Card playing has been an element of basketball – and all other sports for that matter – from the very beginning. Players have long dealt ’em up to even out the highs and lows of winning and losing on the court.

“My rookie year we were in last place,” Hundley once told me. “By the end of the season we were 19-53. There was a lot of poker playing. Slick Leonard, Dick Garmaker, Corky Devlin and me, we were the four ringleaders that played a lot of cards.”

Hundley and Leonard had teamed up in training camp as a pair who liked to drink, smoke and run around all night. Coach George Mikan didn’t seek to stop them. He just wanted to join ’em, Hundley recalled.

“Mikan missed his playing days. He wanted to run around with us, but we wouldn’t let him. We told him that having the coach along just wouldn’t be fun.”

“There was a lot of gambling,” former Lakers coach and Hall of Famer John Kundla once told me.

“It was Mikan who gave Slick his nickname ‘cause he lost so much money to him,” Hundley recalled with a chuckle. “We took a lot of George’s money.”

The Lakers were not a good team, which allowed them to get Elgin Baylor in the 1958 draft. But soon the team’s owners feared that the hard-partying veterans would corrupt the brilliant rookie.

To make matters worse, Baylor was inducted in the army right before the season started, meaning he couldn’t be in training camp.

“He couldn’t come to the team, so we took the team to him to practice,” Hundley recalled. “That was kind of fun. Down in Texas. Elgin was in basic training at Fort Sam Houston near San Antonio. Elgin would play solider all day and then he would join us at night for these open gyms. There’d be a couple of thousand people watching us practice. At night after practice, we sampled the South Texas night life. When we got bored with that, we’d go down into Mexico. We stayed in a barracks, which we pretty soon trashed. The army brass got wind of our partying and poker playing and made us clean the place up. That meant we spent even more time down in Mexico sipping Mexican beer and partying with the senoritas.”

Despite the disaster of training camp, Baylor opened the season by scoring 52 against Detroit. A few nights later, on November 8, 1959, he rang up 64 points against the Celtics, breaking the league’s single-game record set a decade earlier by Jumpin’ Joe Fulks.

Soon fans were lining up to see this phenomenal young scoring machine wherever the Lakers played. But the atmosphere around the team remained a joke so the owners soon brought in former Laker great Jim Pollard to clean up the mess.

“One of my first moves was to stop the poker playing,” Pollard once told me. “Slick Leonard and Dick Garmaker were winning a lot of money from Elgin. I didn’t think it was good for the team’s best player to be losing that much. Elgin wasn’t that bad of a player, really. But Slick was a great poker player.”

Pollard, however, only coached the Lakers their last season in Minneapolis. The next year, they moved to Los Angeles, and Baylor became one of the game’s all time great card players in his own right with his own nickname – “Motormouth.”

If you ask just about any NBA old timers, they’ll tell you the card games between their battles on the court offered some of their best fun and best memories.

That’s why Lakers coach Phil Jackson spoke out against the idea of the NBA banning card playing on its teams. It has long played a part in building team chemistry – when it wasn’t playing a part in tearing down team chemistry.

As for the guns, they’ve now become a gnarly issue that has suddenly come to dog the game, and these days it’s no laughing matter, no matter how much you laugh about the good old days.

If you don’t believe that, just ask Gilbert Arenas.