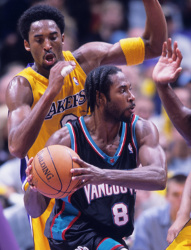 Former NBA players try to extend their careers overseas all the time. It’s almost a non-story at this point. What you don’t see so often is a guy that’s pretty much been off the radar for six years resurface in a small town club across the pond. That’s exactly what Michael Dickerson, of Rockets and Grizzlies fame, is doing.

The former Arizona Wildcat signed with Palencia Basket of Spain last month and has been playing his first official games since February 2003 there. The team, now in the Spanish second division, had a 5-11 record upon his arrival and is relying on Dickerson’s star power to avoid relegation to the third division – although with not much success so far.

Rumors about a potential comeback in Spain first appeared last fall, when Dickerson was visiting his cousin Josh Fisher and started practicing with Gran Canaria, the club where Fisher plays in the Spanish ACB, usually considered the best league in Europe.

Now the comeback is complete. Dickerson, prematurely forced to retire at 28 due to hamstring and groin injuries, is back and happy to be playing – even if on a small stage, away from the bright lights of the NBA.

“It’s a great opportunity, ” the 6-foot-5 swingman said. “I always wanted to play here. It’s a challenge. I wanted to have fun playing basketball again. After retiring, those were difficult times for me personally, but I’m enjoying the chance to play professionally again.”

Unlike others, Dickerson, who averaged 15.4 ppg in five NBA seasons, at least had the chance to sign a big contract before the injuries caught him. In one of his last big moves in Memphis, GM Billy Knight gave him a six-year, $43 million contract extension before the start of the 2001-02 season. The money, though, didn’t make retirement any sweeter.

“It didn’t make it easier at all at the time,” Dickerson said. “It doesn’t really mean anything to me.”

Dickerson, a man of deep spirituality (especially for NBA standards), has used part of that money to travel around the world. He’s been all around Europe and has also spent time in India and Tibet. Still, the player who was supposed to be Pau Gasol‘s perimeter sidekick in the first years of the Grizzlies franchise in Memphis, always found the time to exercise and stay in shape in case the opportunity to return to the basketball courts came up.

Gasol and Dickerson ended up playing together in just 10 games, but that was enough for Dickerson to notice the big man from Spain was something special.

“He was talented,” Dickerson said. “A big man that can shoot and pass the ball… There are not many players like that in the NBA. And he was doing that already at a young age. I knew if he kept getting better and better, he’d become an All-Star.”

According to Dickerson, who’s still in touch with fellow Wildcat NBAers Mike Bibby and Jason Terry, his time in Europe may not be over when his playing days come to an end.

“I’d like to stay here in Spain or some other place in Europe and create an individual training facility or a tranining camp where I can coach kids and help the kids develop their basketball game.”