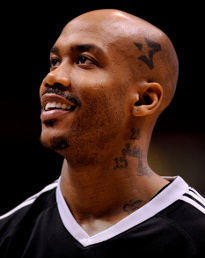 Monday’s announcement that former NBA All-Star Stephon Marbury would sign with Shanxi Zhongyu of the Chinese League caught the basketball world a little bit off guard. There had been ramblings about Marbury potentially playing overseas for the last few months, but China was not mentioned as a likely destination for the troubled guard, who had run out of options in the NBA after reportedly rejecting a one-year offer from Boston and subsequently staging a public meltdown with bizarre Internet broadcasts.

The move, though, makes some sense for Marbury. On the business side, playing in China can help him market the Starbury brand, which had been one of his focuses as of late. Besides, salaries are getting better and better in the Chinese Basketball Association – to the point that Chinese clubs are competing with Euroleague squads for American talent.

“The money comes from affluent business people who are trying to improve their social status through these teams, similar to Europe,” Jonathan Givony, president of the famed draft website DraftExpress.com. “There is a lot of money flowing in China right now.”

Still, Marbury would be taking a massive paycut. The former Knick guard made close to $21 million in his last NBA season. With Shanxi Zhongyu, he would be cashing in $100,000 per month, according to Jonathan Abrams of the New York Times. And that’s in case he’s fully paid. HoopsHype.com blogger Gabe Muoneke claims the Yunnan Honghe Running Bulls owe him $100,000 from his time in China one year ago.

Jason Rabedeaux, the American head coach of the Jiangsu Nanjing Dragons since 2008, considers this an isolated incident, though.

“The Chinese basketball market is very stable and the clubs pay their employees on time,” Rabedeaux said.

In case Marbury cares about such things as minutes and numbers, there’s not much reason for concern there. Although the level of play has greatly improved, the league is still fertile ground for the oversized American athletes. This is a competition where NBA journeymen like Andre Emmett, Rodney White or Andre Brown are averaging more than 26 points per contest. DeAngelo Collins, once a marginal NBA prospect, leads the league in rebounds – at a 15.2 per game clip.

“(The Chinese League) is still very much the Americans doing whatever they please on the court,” Givony said. “Going out and creating their own shot on every other possession, with pretty much zero defense being played, and the fundamental skills of the locals leaving a lot to be desired. The coaches and local players don’t know how to assert themselves on the kind of imports they bring in in order to play ‘normal’ basketball, and that hurts the product big time.”

Also hurting the quality of play of the domestic athletes is the lack of contact with basketball outside of China, especially from the United States, according to Rabedeaux.

“Until the young Chinese basketball player is allowed to go to the United States on a regular basis and have the opportunity to obtain college scholarships, practice with Americans, be coached by Americans and become educated for 4-5 years in the American college/university system, China’s basketball growth will continue to be stunted.”

Basketball itself may be the easiest part for Marbury, but he will find some other things hard to deal with. And it’s not just the language barrier.

“Believe it or not, one of the most difficult challenges for Americans is personal space,” Rabedeaux said. “Unless you have traveled throughout China, you cannot imagine what 1.3 billion people looks like – from traffic, to restaurants, shopping… In China, you can’t drive out to the suburbs and get away from it all. People are on top of you from the minute you walk out the door of your hotel.”

Also, the amenities in the Chinese Basketball Association are more D-League than NBA. You will not find Conseco Fieldhouses or Staples Centers there.

“The (worst) thing was playing almost every game in a freezing gym,” Muoneke said. “Freezing! Not cold… Freezing!”

While the opportunity to play in China has some upside for Marbury, it will obviously be no cakewalk for him. And looking at his track record, there’s no telling how much he will be able to put up with.

Like Rabedeaux said, “If you are looking to be pampered, spoiled or subject to superstar treatment, you might want to miss that connection to Shanghai.”