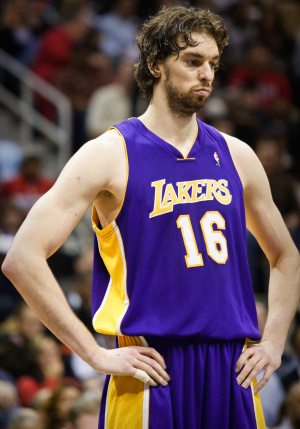 It’s one of those questions that heats up late January for the NBA. Does Pau Gasol deserve to be selected by Western Conference coaches to fill an at-large spot on the All-Star roster?

The Los Angeles Lakers’ loss to the Cleveland Cavaliers this past week would have seemed to settle the issue in some minds. Gasol seemed weak, ineffectual, couldn’t hold position.

“Weenie Gasol,” declared a heading on at least one Lakers internet discussion board after he struggled against the Cavs.

At least that’s how some fickle, frustrated fans see it.

That’s not necessarily the view of the coaches and support personnel around the league, however.

“He’s had those hamstring injuries,” explained a close associate of Lakers coach Phil Jackson. “Pau couldn’t hold position, hasn’t been able to get a lot of lift. That’s what happens to people with bad hamstrings. They can’t perform. That’s all that is.”

“He’s still in the All-Star mix, and he should be.”

There’s a high regard for Gasol among coaches around the league based on what he’s done since coming to the Lakers in an early 2008 trade, especially his play in last June’s championship run by the Lakers.

You can hear that same regard in the voices of his teammates.

“Pau’s always prepared,” said the Lakers’ Lamar Odom in late December. “You see him catch the ball and just go with that pretty left hook. He has an awesome array of moves and shots.”

The seven-foot Spaniard missed the start of the season with a hamstring injury, but upon returning to the lineup and regaining some strength and flexibility, Gasol ripped off a series of huge rebounding games in December, prompting this reporter to ask him if he was trying to imitate Bill Russell.

Gasol laughed off the comment in typical fashion, but his value to the Lakers has been obvious from the moment he joined the team.

If you want a measure of that impact and the respect Gasol has earned, you only need to look at the double teams he draws virtually every time he catches the ball in the post.

Those double-teams make it possible for the Lakers’ offense to operate at high efficiency. Statistics don’t cover Gasol’s full impact, but his presence has meant so much in terms of taking pressure off Kobe Bryant and creating space for the athletic guard to move and attack.

“Pau’s so versatile, so underrated,” Odom said. “There are so many ways he can hurt a team in so many different aspects. His passing. He hits me down low with passes all the time.”

Defenses simply have to be aware of Gasol at all times, and no one knows that better than the opposing coaches who will hold the votes that determine who makes the team.

His place on the team might not be an issue if it weren’t for the fine seasons being turned in by two other bigs in the Western Conference.

Forward Zach Randolph is averaging 20.9 points per game and 11.4 rebounds while appearing in the first 42 games for the Memphis Grizzlies.

Although center Chris Kaman has missed four games for the Clippers, he’s averaged 20.4 points and better than nine rebounds.

Both numbers appear better than the 16.9 points and 11 rebounds Gasol has averaged in 28 games for the Lakers.

Always frank in his assessments, Kaman offered the opinion recently that Gasol shouldn’t be an All-Star because he really isn’t a center and he’s missed a lot of games.

Actually, Gasol is effective at both the four and five positions, and that versatility is a key argument for his inclusion on the team. Gasol is a key reason the Lakers are one of the top teams in the league. He sacrifices shots playing in L.A.’s deep lineup that includes Bryant, but that sacrifice is also reason for his selection.

Kaman is having a fine year, but he plays on the Clippers. Coaches have usually avoided selecting players from teams with losing records. Kaman, however, has twice been named Western Conference Player of the Week and is certainly deserving of consideration.

Randolph probably offers the stiffest competition, with the Grizzlies producing a winning record that hardly anyone expected heading into the season. A bulky forward, Randolph has long put up numbers on a series of losing teams. He has never been known as a strong defensive player.

What hurts his candidacy is that All-Star awards have long been cumulative honors. Coaches might be shy about selecting Randolph for a few months of inspired play with the fear that he could easily revert to old form.

Truth be told, the Lakers coaching and medical staffs are hoping Gasol isn’t selected. That would mean that instead of going to Dallas for a busy weekend, Gasol can get some much-needed rest and additional treatment for all that ails him.

The issue will be settled this coming Thursday when the All-Star reserves are announced.