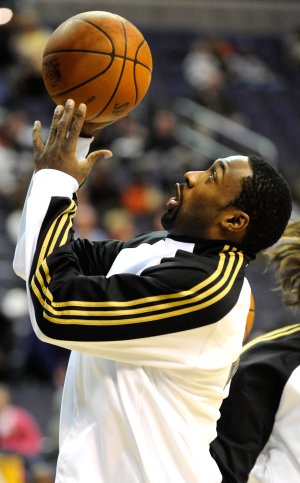 This farce has run long enough, and then some.

Can this be over, now? Please?

Not that Gilbert Arenas wasn’t riding for something like this as long as he has been riding, but let’s face it, as a Menace 2 Society, he’s the most overrated danger since Killer Bees and Y2K.

Only Gilbert could have created something like this out of thin air, blowing a joke up into the second biggest suspension in NBA history at a cost of $9.9 million.

I’ve got a great idea! If Javaris Crittenton is upset at me, I’ll put my guns in his cubicle and tell him to pick one, like we’re going to fight a duel!

Then, when the world went nuts after the erroneous story about Gilbert and Crittenton drawing down and pointing the pieces in each others’ faces, who else would dare to keep treating it as a joke at this tender moment in his career?

Everything will be cool as soon as I tell them what really happened, like always.

In the meantime, I’ll pretend to shoot you guys and you all fall over like you’re dead!

That was they did in pre-game introductions at Philadelphia with Gilbert pretending to shoot his laughing teammates.

Antawn Jamison, the team grownup, was right in the middle, laughing his head off, although Wizard management somehow overlooked him it fined all the young guys.

For his piece de resistance – that’s French for “something only Gilbert Arenas would do” – he then walked into David Stern’s office and informed the commish he expected to be suspended for the season, and wouldn’t challenge it!

Here’s a little advice, Gilbert: Next time, why don’t we do the apology first and the jokes later?

Nevertheless, as Gilbert, who’s good at counting his blessings, at least if there aren’t too many, knows, it’s hardly a tragedy, with $80 million more coming on that contract that nice Mr. Abe Pollin gave him…

Wizard president Ernie Grunfeld has made it clear the team is still considering trying to void the contract.

The Pollin family, which is running things until summer, now makes constant reference to “the legacy of Abe Pollin,” which in this case means putting as much distance as possible between Abe and this incident, taking down all Gilbert’s pictures, erasing him from highlight reels, as if he was never there.

Of course, Abe, the ultimate nice-guy owner, gave Gilbert his silly $111 million contract two summers ago… with Gilbert having just sat out a season recovering from knee surgery… and about to sit out another season.

With Golden State in the picture, Abe actually offered Gilbert the $120 million max. In appreciation, Gilbert took less so they could get more players.

I don’t want to say they deserved each other, but they were a natural.

Wacky as Gilbert is, he’s a fun guy and a major talent/unbroken stallion, whose personality and charitable efforts made him the biggest star in town and a becoming face of the franchise.

Abe was always into doing the right thing, but when that conflicted with taking care of his own, he went with the loyalty. Wes Unseld, a great player and a better person, said Abe kept him years longer than he should have as a GM in the vain hope of getting it right, together.

It was a good-guy organization, if an uptight one after the Michael Jordan era when the p.r. people went bananas, keeping the press out of MJ’s path.

Grunfeld is a prince. His down-home No. 2 guy, Tommy Sheppard, once PR guy for the Nuggets, is among the most personable and popular people in the league.

Now, however, they’re doing the bidding of the Pollin family, which wants to protect their patriarch, perhaps with input from incoming owner Ted Leonsis, who’d love to take over with a clean slate and $20 million less in salary per annum.

Using this incident to dump this contract is naked opportunism that a) sucks, and is b) dumb, since it’s not likely to fly anyway.

An attempt to void the contract would entail a long, adversarial, further-distracting fight before an arbitrator… which the team would likely lose, anyway.

Arbitrators have hardly backed away from challenging the NBA and its teams, even in cases as outrageous as Latrell Sprewell’s physical assault on Coach PJ Carlesimo.

After the Warriors voided Spree’s contract, arbitrator John Feerick, the dean of the Fordham Law School, not only reinstated the contract but shortened Stern’s year-long suspension to the balance of that 1997-98 season.

Nor do the few precedents from similar cases look helpful.

In the fall of 2006, Stephen Jackson, then in Indiana, pleaded guilty to felony recklessness for firing his gun in the air to break up a fight outside a strip club… which also violated his probation for his part in the 2004 Auburn Hills Riot.

Arenas’ guns were unlicensed in the District of Columbia, as required by local law, but unloaded. Sebastian Telfair once got a three-game suspension for bringing a loaded handgun on the Trail Blazers’ plane.

Washington insiders have predicted the team would offer to settle Gilbert’s deal. Luckily, the Wizards aren’t dealing with someone like Sprewell, who would have fought it to the Supreme Court before forgoing a penny.

Gilbert, who put his head on the chopping block for Stern, might take 50 cents on the dollar, or less.

This story doesn’t have any heroes, or martyrs, and would have been a lot smaller story in the first place without wild press reports.

Aside from that, it’s been a lot of fun. Excuse me, I have to go gag now.