Unselfish to a fault?

Unselfish to a fault? 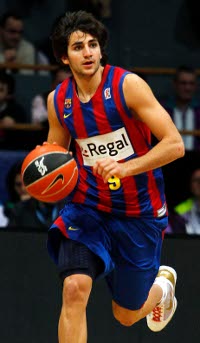 After a long summer of negotiations and deliberations, teen phenom Ricky Rubio, a lottery pick by the Minnesota Timberwolves, took one page out of Fran Vazquez‘s book and decided to pass on the NBA to sign another contract in Spain. Rubio moved from the team in which he grew up, Joventut Badalona, renowned for developing young talents (like Blazers guard Rudy Fernandez, for example) and joined FC Barcelona, consistently one of the top squads in Europe for the last 25 years.

His choice was widely discussed in basketball circles. Many were critical. Rubio, unlike Vazquez, made the call to enter the draft early only to leave the Wolves empty-handed by the end of the summer. Others, looking at the example of European players that went to the NBA too young and got stuck on the bench, have praised the move. It should be noted, though, that Wolves GM David Kahn went on the record saying Rubio would start from Day 1 in Minnesota.

As far as team success, the decision to sign with Barça appears to be the right one. The Catalan club has been trouncing competition both in the Spanish League and the Euroleague, with just two losses in 33 games and wins by an average margin of 20.2 points per game. The last one came Sunday – 105-55 against Gran Canaria, a middle-of-the-pack team that features former NBA players like James Augustine and Melvin Sanders.

When it comes to his individual performance, though, the reviews have been mixed. While Rubio ranks among the leaders in assists and steals in both the domestic and European competition, he’s averaging a rather pedestrian 6.4 ppg in the Euroleague, which ties him with journeyman Daniel Santiago. He has not been shooting very well – 39.0 percent from the field – and has not been shooting much either – just 3.7 attempts per game.

Nikola Loncar, an NBA analyst for Spanish TV, went as far as to question whether Rubio would have been worthy of a first-round pick in 2010 given his play early in the season. That said, even Loncar, who won gold medals with Yugoslavia in the European and World Championsip playing with the likes of Zeljko Rebraca and Dejan Bodiroga, recognizes Rubio has been making some strides lately.

“I didn’t like his conservative approach,” Loncar said. “We got used to seeing Ricky score 15-18 points very often. That’s the Ricky I like the most and it wasn’t happening anymore. Then there was a turning point for his season with the game against Real Madrid (in late December). Even his shooting form has changed. He’s not shooting like he used to.”

Still, Loncar believes Rubio has to be much more aggressive on the offensive end.

“It’s OK that he’s unselfish, but there’s going to come a time when he has to make more decisions offensively. It’s not just that he has to score. If he really wants to be one of the greats, he has to score the key baskets! It’s great that he’s dishing 8 assists, but if you are just going to score 4 points… Come on.”

Meanwhile, Timberwolves scout Pete Philo, who was in the war room when Minnesota drafted the Spanish guard, thinks it makes sense for him to defer to the veterans in his first few months playing with Barça.

“Ricky is a very smart and clever player, so he’s not going to come into a new team early in the season and try to do too many things,” Philo said. “I think he’s such a great teammate and great team player that it was brilliant actually the way he came into that team.

“There aren’t that many point guards that have his makeup. To me, it’s pretty refreshing to see his unselfishness.”

Rubio’s low-key attitude is still striking considering he’s probably the most high-profile player on the FC Barcelona roster. At 19, the 6-foot-4 guard has achieved a popularity than few non-NBA players enjoy in Europe. He’s the pitchman for McDonald’s in Spain and one the most popular athletes in the country – especially among teenagers. Pete Mickeal, one of his American teammates, blogged a few weeks ago on HoopsHype that being around Rubio was like traveling with a rock star.

“I played with Latrell Sprewell and I thought that was something,” Mickeal said. “Everybody wanted a piece of Spree, everybody wanted an autograph, but there’s no comparison on the attention Ricky commands. It doesn’t matter where we’re at. Anywhere in Spain, in Europe… We can be in Turkey, everywhere. That’s why I call him the Rock Star, because I actually see people crying over him. I’ve never seen it! Girls crying! People want pictures, they come to the hotel to find him… It’s unbelievable.”

PUTTING IN THE WORK

Rubio is right now the seventh leading scorer on a club that is filled with NBA talent and heavily favored to win its second Euroleague crown. The six men ahead of him – Mickeal, Vazquez, Juan Carlos Navarro, Terence Morris, Erazem Lorbek and Boniface N’Dong – have either played in the NBA or been drafted by one of its teams. Rubio should soon move up in the pecking order, especially if he continues to improve his jump shot, long considered the most flawed area of his very flashy game.

His former teammate Rudy Fernandez was considered a slasher early in his pro career, but ended up developing a deadly three-point shot with the extra time spent in Spain before heading to the U.S. Rubio is credited for a strong work ethic, so it’s not crazy to believe he could become a decent shooter down the road.

“I spent time this summer with (Rubio) during the Spanish National Team training camp down in Cadiz and I watched him really getting in a lot of work both before and after practice,” Philo said. “He’s dedicated and he knows where he needs to work as far as shooting. It’s getting better.”

Mickeal agrees: “He puts the work in every day. Anybody who’s willing to put the work in can be anything they wanna be. It doesn’t matter what anybody says, what the media says. I watch him every day. He’s gotten so much better because he’s been putting the work in before practice. That’s the bottom line.”

Rubio should have plenty of time to work on his jumper before leaving for the NBA, as the opt-out clause on his contract with Barça doesn’t kick in until after the 2010-11 season. Only then will we be able to see how Rubio’s game flies in the big leagues.

Raul Barrigon contributed to this story / Picture by Emilio Cobos