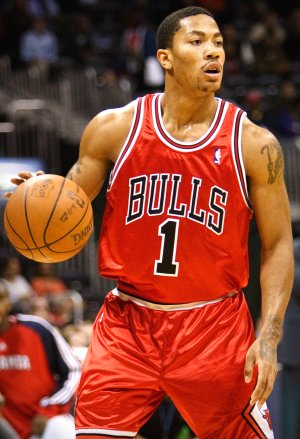 The Chicago Bulls got off to a miserable start this year, one that consisted of bum ankle to their star point guard that altered the team’s fortunes, rumors of the coach’s impending firing, and the search for more offense after the departure of Ben Gordon.

While the ship hasn’t totally been righted, the Bulls appear capable of returning to the postseason, even though the team’s makeup could change by the Feb. 18 NBA trading deadline.

First off, when point guard Derrick Rose injured his ankle early in the preseason, the entire Bulls team felt his pain.

Rose hasn’t missed any regular season games, but he certainly wasn’t his explosive self early on.

“It was frustrating,” Rose said.

Rose eventually worked his way through the injury, but it wasn’t easy.

“He missed the whole month of training camp pretty much and that set him back, getting in condition and from a mental aspect of not being able to push off his ankle the way he wants to,” Bulls coach Vinny Del Negro said. “He has relied on athleticism a lot and when that was taken away from him, that obviously changes things.”

Now healthy, Rose has shown marked improvement after earning Rookie of the Year honors last year. This season he has been named to his first NBA all-star game, something that should become an annual occurrence over the next decade or so.

Not only were the Bulls coping with injuries to Rose, along with Kirk Hinrich and Tyrus Thomas, but Chicago was dealing earlier in the season with rumors of Del Negro’s potential departure.

Before that recent surge, nobody was receiving more heat than Del Negro. It seemed like every day there was a story speculating on his potential successor. Del Negro says when the team was at its lowest, his only recourse was to keep battling.

“I never get too excited or too down if you win or lose, you have to keep fighting and figure things out, especially with young teams,” he said. “Some of our guys are playing at a high level.”

The players, like everybody else were aware of the rumors, but like their coach, they had no choice but to block out all distractions and concentrate on trying to turn around a disappointing season.

“The players really kept together,” Rose said. “We weren’t worried about anything like that and we let the front office deal with that, it’s not our business. Our job is to come in, play hard and make this organization look good.”

Few have done more to make a team look good than Rose, one of the most explosive players breaking down a defenders in the NBA.

“The way he’s been playing he has really helped us turn the season around,” Bulls swingman John Salmons said.

Just when the team was regaining its collective health, Joakim Noah is now out until at least the all-star break with plantar fasciitis in his left foot.

Earlier, Hinrich missed six games with left thumb sprain before returning the second week of December. Thomas was sidelined 22 games with a left radius fracture from Nov. 7 to Dec. 22.

Plus Luol Deng, says it took time to come back from right tibia stress fracture that cost him the final 22 games of last season and the playoffs.

“I missed all that time last year and in the summer I didn’t touch the ball and didn’t run,” Deng said. “I sat around, waiting for my bone to heal and I am starting to play better as the season goes on.”

The same, Deng says goes for Del Negro, who came to the Bulls without any head coaching experience.

“You can’t expect coach to be great right away after he got the job,” Deng said. “One thing he has done great is get better, and that is all you can ask.”

Seemingly, the Bulls have gotten over the worst, although a prolonged losing streak could invite that same old negativity to return.

Still, if the Bulls can stay around the .500 mark that might be enough for an Eastern Conference playoff berth. Like last year, the Bulls hope to be playing their best basketball in April, when they won five of their last six regular season games to finish 41-41 before giving the 2008 champion Celtics all they could handle in the postseason.