DeMar DeRozan: "I'm going to try to save as much as I can for Saturday"

DeMar DeRozan: "I'm going to try to save as much as I can for Saturday" 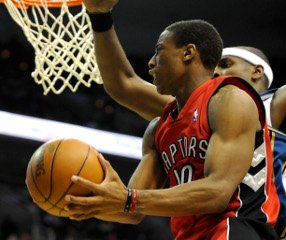 How is your preparation for Friday going?

DeMar DeRozan: It’s been going good. I’ve been having a lot of my teammates help me out giving me a lot of ideas and everything. Things have been going great.

How long have you been practicing for it?

Are you going to be fully healthy for the contest?  How’s your ankle holding up?

DD: I think a little bit of everything. Trying to be, you know, creative.  Try to come with a new twist.

Is it hard to come up with new stuff considering the dunk contest has been around for so long?

DD: Yeah, I think it is pretty tough trying to come up with new dunks and everything but that’s when creativity comes into play and you just try to use it.

DD: I’m going to try to save as much as I can for Saturday so I won’t have to give away too much.

What are your thoughts on Eric Gordon, your opponent, as a dunker?

DD: I think he’s a great player. Awesome scorer. Big guard scorer. But I think he’d say the same – he’s really not too much into dunking.  It should be interesting how it plays out.

Has he done any dunks that have opened your eyes?

DD: He’ll definitely catch you off guard, especially on the fastbreak. He can get up (and) dunk the ball every now and then, but nothing too spectacular.

What is the best dunk you’ve ever pulled off?

DD: Oh, man. I don’t know because in high school you just mess around and try to do crazy stuff. I did a lot of stuff where I surprised myself since high school.

Is there a guy who you pattern your dunking after?

DD: Nah, I try to watch everybody and try to learn from everyone and try to reinvent myself.

Is it true you started dunking in Grade 6?

DD: Yeah, that was the first time I dunked.

Was it a one-handed one?

DD: Yeah, it was just one-handed, off one leg, off the run.  Just dropped it in.

How tall were you at that point?

Were you the only one of your friends that could dunk at that age?

DD: Oh yeah, I was the only one so I was showing off – trying to show off for the girls.

Were you surprised that you didn’t get picked to play in the Rookie-Sophomore Game?

DD: Yeah, I was definitely surprised. I felt like I’ve been a big contributor to my team this year – especially starting on a team that is in the playoff hunt. But I just try to look past it – I’ve got bigger and better things to worry about as the season goes on.

Have you used it as motivation?

DD: Yeah, definitely I’ve used that as motivation and just keep going and prove everybody wrong.

How would you rate your performance so far in your rookie season?

DD: I think I’ve been getting better every game. Learning a lot more from the veteran guys that are on the team. Just learning from them and taking everything from them and just trying to get better.

What’s been the hardest part of the transition from USC to the pros?

DD: Already playing 50 games in a shorter period of time especially coming off my only college season playing about 28, 30 games over a span of five, six months.

Is it mentally that it wears on you or is your body getting tired from it?

DD: I try to take care of my body, but I’d have to say mentally. Travelling. Just everything comes in to play, especially your first year.

Were you surprised at what happened at USC this year with the school enforced sanctions?

DD: Yeah, I was surprised. I think they started off great. I think that start was showing how good of a team they really was. Once that happened (the sanctions), you could just see a lot of stuff suck out from them. They feel like they really can’t play for nothing, so I think that really hurt them.