Jerry Colangelo: "Did I sweat in the Olympic final? Sure"

Jerry Colangelo: "Did I sweat in the Olympic final? Sure" 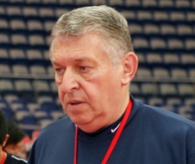 What do you think about the exhibition game between the best two teams of the last Olympic Games?

Jerry Colangelo: On behalf of USA basketball, we’re very excited about the World Championships this summer. We’re excited about coming to Europe and playing in Spain. We have very great respect for the Spanish Federation and the work they’ve done in the game of basketball. We look at it as friendly competition and preparation for the World Championships, and I’m sure the Spanish team and the U.S. team wanna play the best competition to get ready. And that’s what this is all about, so it’s a great opportunity to prepare and what better place than going to Spain. We will play two games against Spain and Lithuania. I’ve been in Madrid and Barcelona three or four times. Both are two great cities. There’s great interest in the game of basketball in Spain. There’s a lot of passion for the game; I have a passion for the game, that’s a great marriage. I know the food is good in both places. I like real good paella to begin with and then the fish in Barcelona is pretty good too.

Did you really think, during the fourth quarter of the Olympic finals, “‘Oh, Spain can beat us?”

JC: One thing I know about the game of basketball is that in any given night a team can win. It’s a game of streaks. When we played Spain earlier in the Olympics, we beat them pretty bad, so a lot of people were saying, “Well, there’s not going to be a contest.” Well, there’s pride involved too. They came out… They competed. That’s what you really expect. And they had a run and they were real close. Did I sweat? Sure. I got up out of my seat and walked down to the corner of the floor… I wanted a different perspective. I didn’t want to talk to anyone. It took two shots made by Kobe and Wade to put it away, and then I felt, you know, “We have it.” We worked hard to get it, and we’ll have to do it again to win the World Championships.

Do you think that FIBA rules give an edge to European National Teams?

JC: Well, the length of the game is a major difference, and the lane… Those rules are gonna change going forward, which is good. We should have more consistent rules. Basketball is the number two sport in the world behind soccer, and I want basketball to be number one.

What do you think about Bryan Colangelo’s job.

JC: I’m very proud of what he’s done on his own. He’s very independent. He did a great job for us in Phoenix, but it was a time for him to go and do his own thing. I’ve never had any doubts that he would be successful. He’s a hard worker. Work ethic is important. He had been around me his whole life so he learned what no to do maybe (laughs).

You were quoted in a story on FanHouse saying that Chris Bosh had committed to the program. Then Bosh said he hadn’t.

JC: What I’ve said in the last two days and I’m sticking to it is that all we’ve announced is our National Team roster. That’s all we’ve done. I’m aware of what everyone has in front of them. There’s a number of guys who are free agents. There could be maybe some injuries, personal issues, who knows. But we don’t have to make any decisions ourselves until next summer. So why talk about it? I’m not gonna speculate on any of them because I’ve been around the game too long to know that things change in 24 hours, in seconds maybe.

What’s your take on the story about you recruiting Mike Krzyzewski to coach the Nets?

JC: I know the story regarding me. My response is that I haven’t heard from anyone. I’ve heard from no one.

What do you think about the future of the Suns?

JC: They are in a little transition. They have to make some major decisions, so their future… It will be interesting.

Do you think Amare Stoudemire will leave? 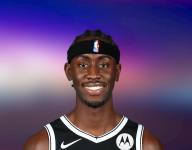