Al Horford: "I think I can be a go-to scorer"

Al Horford: "I think I can be a go-to scorer" 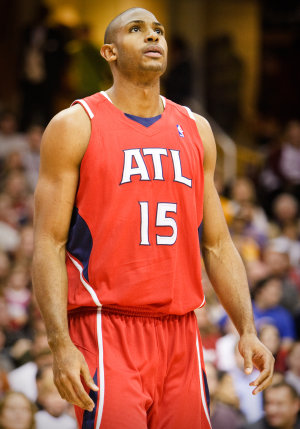 By the start of the season, did you expect that you could play the All Star Game?

Al Horford: It was one of my goals. But you know, the way I play, maybe I wasn’t putting up such great stats in order to be considered. But the coaches valued the work I do for my team and the good run of the team this season. So it was an honor to be selected by them.

When did you learned that you were going to play the All-Star Game?

AH: I was aware the morning it became official. The Hawks’ PR person called me and said “Al, you’re in.” I was so happy.

Your father (Tito Horford) is a former NBA player. What did he tell you?

AH: He was so happy. Right now he’s in Missouri, but I think he will be here on Sunday.

What’s your take on the fact that the coaches chose you over your teammate Josh Smith? Did you speak with him?

AH: Yeah, I talked to him. Obviously he feels he should be here playing on Sunday. But you know, it’s up to the coaches, they’re the ones who judge the players’ performance, and they chose me. Josh is a hell of a player.

Do you think you can become a go-to scorer in the NBA?

AH: Yeah, I think that as long as I continue to improve my game… I feel good about it. It’s my third year in the league and I feel comfortable in every game, so I expect that at the end of this season or at the start of the next one, my offensive game will be at the level it has to be at.

What do you think about the free agency status of teammate Joe Johnson?

AH: Let’s see what happens with Joe. He doesn’t worry about his impending free agency. We hope he stays.

Johnson is a great player but maybe not so popular as other stars. Do you think he should market himself a bit more?

AH: Joe is the kind of player you want to play with. He’s focused only on basketball, and hopefully Atlanta will take that into consideration this summer. It will be very interesting what happens then.

You are enjoying the All-Star Weekend. How was the Magic and Zo’s pool tournament?

AH: Well, actually my game is table tennis, but I played a good tournament. I got to the second roung and lost to some guys who were semi-pro. Nate Robinson was there, Kenny Lofton, Emmitt Smith… It was really fun.

Shakira and Alicia Keys will perform at the All-Star Game. Which one would you meet?

AH: Shakira. I want to meet her! I’m a fan of her music and everything she represents. She’s such a good dancer.

You got the the Dominican Youth Award this year. What does it mean to you?

AH: It’s really special. Miss Universe Amelia Vega has it too. She is a great example for the youth of my country. My father received the award because I couldn’t go, I was already playing games with the Hawks. The president was there and it was really a great honor.