Floyd Mayweather: "I could have played in the NBA"

Floyd Mayweather: "I could have played in the NBA" 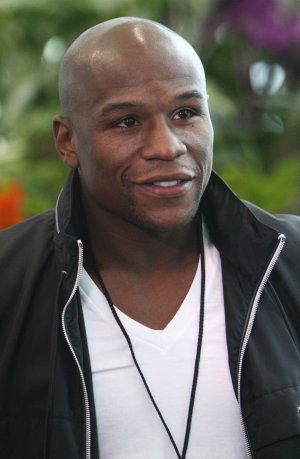 Did you enjoy the All-Star Weekend?

Floyd Mayweather: I always enjoy the All-Star Weekend. You’ve got the unique players and the fans favor that they come out and play and put on a show. It’s just not about the East Coast vs. the West Coast, but it’s about displaying their skill against the top players of the world. You’ve also got the dunk contest, the three-point contest, the Rookies vs. the Sophomores.

This hasn’t been your first time, right?

FM: No, no. I’ve gone like six, seven times. I like to come out and see other top athletes in the world.

You’re a big basketball fan. How did you become one?

FM: I was in Las Vegas and what happened was… Sports books. I always had been a fan of basketball, but then once you get to betting in sports, it’s totally different. You really get involved. You have a total different feel for the game.

Being from Michigan, are you a Pistons’ fan?

FM: I always liked the old-school Bad Boys and then the team they had with Billups, Wallace when they won the title in 2004. They should have kept the team together. They could have won a couple more championships, but they split up and then the championship went to the Spurs.

Are you friends with any NBA player?

FM: I would say I have associates in the NBA. If you go to a couple of clubs with somebody, that’s an associate. A friend is with you through difficult times.

Do you play basketball often?

FM: I play some of the celebrity games. I had 14 points or so in the All-Star Game in New Orleans.

FM: Cool, OK. If I took it serious… I’m a well-rounded athlete so I think I could have been a top college basketball player. I’m skillful enough and talented enough. So if somebody had taught me all the fundamentals of basketball, I guess I could have played in the NBA.

You know Manny Pacquiao is also a big fan of basketball and likes to play. Do you think you can beat him on a basketball court.

FM: If he’s a big basketball fan, more power to him. That’s all I can say.

Which player do you think plays basketball like you do boxing?

FM: You play basketball, you don’t play boxing. I don’t know any undefeated teams. You play better when you have good teammates.

Footwork is very important in boxing. Which player has the better footwork in basketball?

FM: Conditioning-wise, yes. You have to be in the best condition to practice boxing, so it really helps them there.

Don’t you think maybe boxing is losing some potential talents because there’s much more money to be made playing basketball than doing boxing?

FM: You want to hear from the elite, the best. This is like in life. You give what you’re paying for.

Have you envisioned the day when you step away?

FM: Well, you know I’m closer to 40 than to 21, like I always say. But the main thing that I’m happy with, that I can say about my career is that I made a lot of smart business decisions and I didn’t take any abuse in the sport.