Cavs should go for it

Cavs should go for it 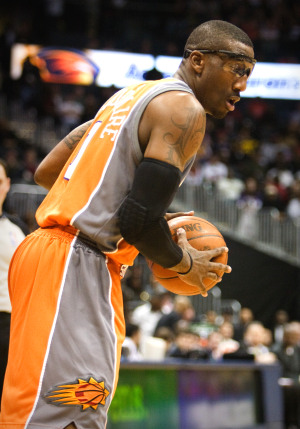 As I write this, it’s clear that Amare Stoudemire is headed for Cleveland, reconfiguring the NBA As We Know It.

Or he’s going to Miami, which would, at least, reconfigure Miami.

Or he’s staying in Phoenix, where the Suns, who’ve been on the verge of trading him since last year at this time, have just figured out trading him would make hem the only rebuilding program with a wing for seniors with Steve Nash, 36, and Grant Hill, 37, both signed through age 38.

In other words, the long-awaited Summer of 2010, with its superstar free agent class, has just begun in mid-February.

For everyone who says it’s going to be a dud, that LeBron James and Dwyane Wade aren’t going anywhere, guess again.

Even if they may not wind up going anywhere, Bron and D-Wade really, truly don’t know what they’ll do – and if they did, they’d be damned fools.

They only get one shot at controlling their fate in their prime. They set it up this way in 2006 when they put their heads together and decided to take shorter deals for less money to give themselves this option, so why would they decide before they know what the deal is? Not what the deal looks like now, but the deal at the end – the only time that counts.

Even if we all publish daily, or, these days, momentarily, obliging us to act as if we know something, nothing ever counts as much as The Last Thing That Happens.

It’s great for the Cavaliers to rule the NBA right now… But if you can remember back that far, they ruled the second half of last season, too, overhauling the Celtics in the East, passing the Lakers to post the best record, going 8-0 in the first two rounds with LeBron doing Dancing With the Stars nightly.

Then Orlando shocked their world in the East Finals, so it’s a good thing for the Cavs that Bron wasn’t a free agent in 2009.

Getting Amare would be daring for the Cavaliers, whose natural inclination is not to tinker with a team that’s 40-8 since its 3-3 start, 28-4 since Dec. 20, and has one loss since Jan. 10.

Give owner Dan Gilbert and GM Danny Ferry credit. That’s what they did last season, under similar circumstances, passing up Shaquille O’Neal, whom Phoenix (them again?) was willing to donate for Ben Wallace and Wally Szczerbiak, or at least, their expiring contracts.

Even if he wasn’t the Shaq of Old and couldn’t cover a high pick-and-roll with a butterfly net, Diesel was an upgrade over Zydrunas Ilgauskas, who didn’t cover it any better, as Orlando’s Hedo Turkoglu and Dwight Howard proved over and over.

Amare is a horse of a different fire department.

At 27, he’s in his prime, such as it is, with his immense talent, pouty attitude and 8.6 rebound average, even lower than his oh-well-I-guess-I-could-go-after-this-one 8.9 career average.

Worse, he’s not a free agent this summer. He has an opt-out he doesn’t have to exercise if everything blows up and could stay where he is for $17.7 million, whether the Cavs still wanted him or not.

Risky as it is, it’s the way to go for the Cavaliers.

Say the worst happens: They’re upended again in the East draw, meaning they’re not farther along than a year ago, and not even as far along as they were in 2007 when they made the NBA Finals, even if the ACC might have been stronger than the East that spring.

Bron, who would otherwise have looked around and seen only  Mo Williams, JJ Hickson, Anderson Varejao, et al, plus 14-feet worth of 30-something free agent centers in Shaq and Z, now, at least, has Amare to go with their role players.

In my mind, that would still give Cleveland a better chance to sign Bron than they would have had without Amare.

Amare was a problem in Phoenix which had no one who could get over on him, once he realized how indispensable he was.

Cleveland has two. One is obvious. The other should be, but people have forgotten how great Amare was when Shaq arrived two seasons ago before the whole thing fell apart, starting with owner Robert Sarver’s finances, which is why the Suns are now like the Kansas City A’s, donating players to the Yankees or whoever wants them.

You think Hickson looks impressive cutting down the lane, taking a pass from a double-teamed LeBron and jamming?

Picture someone wearing goggles doing that, only at a higher  altitude with scarier tomahawk action.

All the Cavs have to give up is Z – there’s a loss – and, perhaps, Hickson, who’s promising but not likely to ever average 20-8.

With the Heat cooling (get  it?) – they’re 20-26 since their 6-1 start – Pat Riley now feels obliged to find some help for Wade, before he’s reduced to a grease spot – not to mention giving him some reason to return.

Of course, before the season with Miami coming off a No. 5 finish in the East, and early on when they looked good, few expected Wade to leave – including Wade, the only one of the big free agents who talked about recruiting other big guys.

This being only a rehearsal for summer, it’s something to remember in the coming months while listening to more breathless reports about about why everyone is sure to do what this or that. The way it is now isn’t the way it will be at the end, and it’s not likely to be the way that people now think it will.