Landscape just got better for Cleveland

Landscape just got better for Cleveland 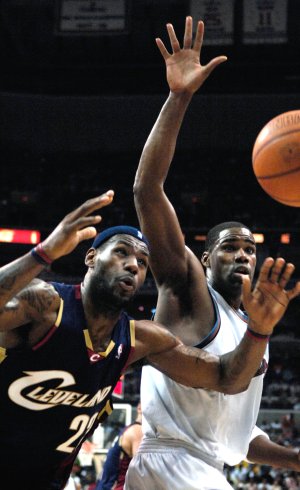 The trade deadline cracks me up. I am amazed at how many players worry about getting traded. I literally want to shout as loud as I can and say, “Who cares?“ The question I want to ask every player that seems to worry about this deadline is this… When you were dreaming as a young man about playing at the professional level, did you worry about which team you would play for? Heck no. All you worried about was getting a scholarship and improving enough to be considered to advance to the next level. I understand the emotion after you find out a trade has happened, but it should be short-lived and here is why…

Playing in the NBA is a privilege and no one owes you anything. I want all NBA players to investigate how many hard-working Americans in this country lost jobs these past few years. So now think about how silly it sounds when you are worried about moving from one job to the next, but still receiving the same check. You are worried about a truck moving your furniture from one mansion to the next. Yes, I understand the anxiety of leaving your family midstream. I got traded twice in the same scenario to Seattle from Phoenix and from Indiana to Houston via Denver.

Not one time did my wife say stay home and forget basketball. She packed my bags and said, Go prove them wrong and, most importantly, keep making that money. If Cleveland was to cut LeBron James and no team picked him up, the league would still go on. This is the nature of sports. And when you start to believe you are being done wrong… Well, that’s when you become short-lived.

Every player that was traded this deadline and still can put on a uniform should be extremely thankful they still have a job and every player that had his name tossed about in many rumors should not be offended if they are still playing with the same team.

The one player I was extremely impressed with during this trading period was Amare Stoudemire. He never lashed out or said, I want out. He said one simple statement which rings true and I wish every player when mentioned in rumors will express.

He said, If I end up in Cleveland or Miami that will be fine or if I stay in Phoenix that will be OK as well.

I could care less if he meant it or not. It let me know that he has now come to grips that whatever happens when you are under contract is out of your control. So deal with it and adjust.

Here are my thoughts on the deals that were done…

– The Cavaliers just peeked through the door and said “boo“ to the Celtics, Magic, Hawks and Lakers. I believe that these are the top teams in the NBA and the Cavaliers just pulled off a coup. Antawn Jamison gives the Cavaliers a player who can score 30 with zero plays ran for him. Jamison has the best array of shots from any position on the floor of any player in the league. Would Amare have been huge for them? Yes, but Jamison is a constant mover and because of that strength he will get high-percentage shots in the Cavalier offense. He is also a very good rebounder on both glasses. The major attribute is his tremendous leadership skills and desire to finally go deep into the playoffs. I picked the Cavaliers last year to win it all and I assume I have just jumped back on their wagon with the addition of Jamison. 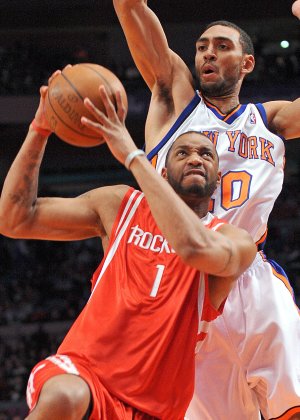 – I am so glad Tracy McGrady is back in a uniform. The problem is… Do the Knicks really intend on giving him a chance to show he is still the same player? We all know this was about salary cap, but if Tracy is willing to take a paycut next year, the Knicks could still add two top-notch players not named Lebron and Dwyane Wade and become a playoff contender in 2011. The Knicks have stayed with the plan of freeing up a ton of money and now we can sit back and watch how everything plays out without draft picks. The addition of Eddie House will help stabilize a locker room that could fracture mentally as the season winds down.

– I like Kevin Martin, but I don’t understand the Rockets giving up their best interior scorer. Carl Landry will become an All- Star with the Kings and that’s a guarantee. Landry is a horse and Paul Westphal will love him. Martin will have to share shots with Aaron Brooks, which means the frontcourt for the Rockets better get on the glass to get looks. I hope Rick Adelman can find a way to keep those big guys happy when his guards are taking 70 percent of the shots.

– When I first saw Marquis Daniels and Josh Howard as rookies playing for Dallas, I thought those two could become stars. They should be a great example for young players like OJ Mayo, Russell Westbrook, Brook Lopez, etcetera. You can never rest on your laurels. Even if you get a head start in the league, that does not mean you win the race. The race is about how many years you can perform at a consistent pace and reach the level we expected. Howard is off to one of the loneliest islands in the NBA, the Washington Wizards. I understand he was hurt consistently over the last few years, but Kobe Bryant put up numbers with a broken finger and bad ankle.

With the addition of Caron Butler and Brendan Haywood, the Mavericks are definitely one of the top teams in the West. But they will only go deep in the playoffs if Haywood and Erick Dampier provide great interior defense. Butler is a very gifted player and I am extremely excited he has a chance to redeem himself and get back to the player I really enjoyed watching. 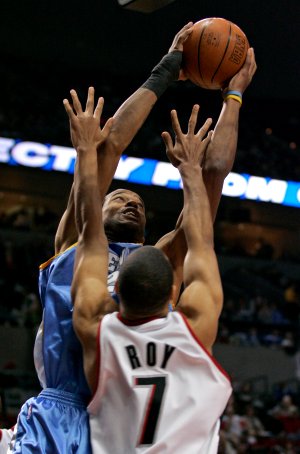 – When Marcus Camby got traded to Portland from the Clippers, they said he was so upset that he ran out of the team dinner. I really find that hard to believe. I believe this is what really happened… Camby, not wanting to seem too enthusiastic, used the acting classes he was secretly taking during off days in Los Angeles. He turned his head and threw some water in his eyes, slammed his fist down on the dinner table and for good measure uttered a few obscenities. He then raced out the restaurant, ran around the corner and started doing cartwheels and screaming with joy.

The Blazers have put themselves in a tremendous position to make a serious run come playoffs. The key is obviously Brandon Roy getting healthy and quite possibly Greg Oden coming back for the playoffs. I think Camby deserves to be on a team that is primed to win now and I am glad the Clippers made him use his acting lessons.

I do like Travis Outlaw a lot. I think he and Blake Griffin will cause a ton of matchup problems next year. I am still one of those superstitious people that believe the Clippers are cursed until they move out of L.A. and create their own identity. They were a more competitive team when they played in San Diego and I would love to see them in Anaheim one of these years.

– Darko Milicic is off to Minnesota for one of my favorite players – Brian Cardinal. Brian is the son of one of my favorite trainers when I was at Illinois – Rob Cardinal. Joe Dumars‘ nightmare refuses to go away. Joe, please admit this guy haunts you. I think it is pretty obvious he can’t play and wants to go home. Kurt Rambis, do him a favor and let Darko go home. We really need to stop punishing this guy.

– The Bulls give up Tyrus Thomas to the Bobcats and get a steal in Hakim Warrick for John Salmons. I really like Warrick because he is not just athletic, but he can actually put that orange ball in the basket. Also, Flip Murray from Charlotte will carry the Bulls offensively on nights when they need him. Thomas, welcome to the world of getting the ultimate teacher in Larry Brown.

Tyrus, here is some advice from a former player of Coach Brown. Listen and listen well. Because if you do, you might become a pretty good basketball player and not just an athlete. There is a reason why you have not progressed, so get ready to make your mouth small and ears big or you will be out the league and a European star in a few years.

– Lionel Hollins just got more energy to throw on the floor with Ronnie Brewer. I can’t see him playing a ton of minutes, but he will play a very good defensive role in the fourth quarter when the Grizzlies can rotate OJ Mayo and Sam Young out for Brewer.

– I mention Theo Ratliff because he might become a starter for the Bobcats. Brown loves defensive-minded big men who do not crave the ball. Ratliff also brings a good spirit to a team that has some characters.

The landscape is similar. The Lakers, Cavaliers Magic, Celtics and Hawks are still the teams to beat, but the most fun will be the competitive teams at the bottom of the Western Conference fighting for playoff spots. The best month of basketball (March) is almost here and I can’t wait.