Haddadi still a work in progress

Haddadi still a work in progress 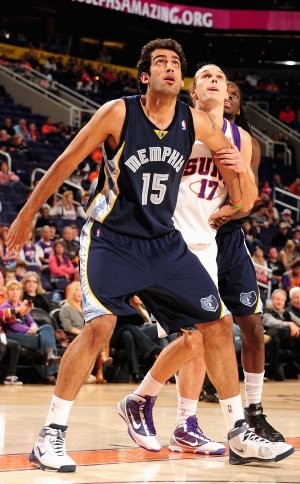 Kid plays soccer in a poor country, turns to basketball at 13, doesn’t even have shoes at the beginning, but ends up excelling to the point that he’s called to play pro ball in America.

That’s the story in brief of Grizzlies center Hamed Haddadi, who became a trivia answer last season as the first Iranian ever to make it into the NBA.

One year and a half later, though, Haddadi has done little to be remembered for anything else.

Stuck behind All-Star Zach Randolph, double-double machine Marc Gasol and shot-blocking rookie Hasheem Thabeet, Haddadi’s playing time has actually gone down a notch this season – 4.8 mpg, 0.9 ppg, 1.6 rpg – compared to the last one, where he averaged 2.5 ppg, 2.5 rpg and 0.6 bpg on just 6.3 minutes per game.

That success, with the team no longer in the player development business and using a short rotation (no bench player averages more than 17 mpg in Memphis), probably isn’t helping Haddadi’s cause. Also hurting him early in his NBA career is the brutal transition he’s had to go through. Unlike most international prospects, Haddadi didn’t see much real competition before joining the league and is still playing the price for it.

“Everything goes so fast,” Haddadi said. “Here everybody can run, shoot and jump. In Iran, if you were good at one of those things, you were not good at the others. It’s difficult for me.”

While basketball is a booming sport in Iran, the domestic league is leaps and bounds behind what you’ll find in Europe, for example.

“The league was not very competitive at all,” said former Clipper Josh Moore, who played for a club called BEEM at the northeastern Iranian city of Babol. “A large majority of the players were casual fans at best and viewed the league as a glorified men’s league that was trying to go legit, so there was a big gap between the teams that were very bad and the ones that were competitive.”

A stint in Europe may have eased the transition for the likeable Haddadi, but he passed on playing there when given the chance. The 7-foot-2 center, whose English is as much a work in progress as his game, says he received an offer from Serbian powerhouse Partizan Belgrade three years ago.

“They called me and said they wanted me for one year,” Haddadi. “But I answered no because I wanted to focus on the Olympic Games in Beijing and wanted to practice with the National Team. It worked well for me because I played pretty good at the Olympics and Memphis signed me.”

The Beijing outing indeed proved to be key for Haddadi’s NBA hopes. He led the Olympic tournament in rebounds and blocked shots and was able to display his skills in front of a large audience.

Moore, who played against him during his time in Iran, wasn’t surprised by Haddadi’s impressive performance.

“He has a great amount of natural skill and potential,” Moore said. “I would compare him to Dirk Nowitzki skill-wise, with enough heart to get dirty around the basket – which Dirk doesn’t have. He has great footwork and, for some reason, a natural feel for the game.”

NO BIG CELEB BACK HOME

For all the attention he commands in the U.S. even while not getting much playing time, Haddadi is far from a household name in Iran, a soccer-crazed country where the rest of sports don’t get nearly as much attention.

“In fact, I’m a bigger star here than I am in Iran,” said Haddadi. “There, it’s all about the football players. You see the TV or the newspaper and it’s all football. They know me, but I’m not on that level. And I’m cool with that.”

Haddadi, who has another guaranteed year left on his contract with Memphis, will have a chance to increase his profile back home next September when he plays at the World Championships in Turkey with Iran. In Beijing, the current Asian Champions went 0-5 and lost their games by an average margin of 28.1 points.

It might be a tall task, but the Iranian giant believes things will be different this time around.

“We have a good team,” Haddadi. “We have six or seven players that can play well. We share the ball and we know each other because we’ve played together six or seven years. We can make some noise.”