The enshrinement that will never happen

The enshrinement that will never happen 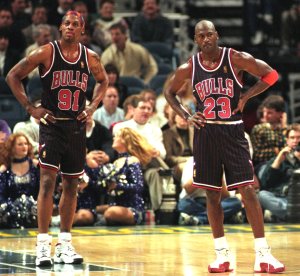 The late, great comedian Bob Hope used to have a wonderful line when he hosted the Oscars.

“Welcome to the annual Academy Awards presentation,’’ Hope would say. “Or, as it’s known in my house, Passover.”

When the Basketball Hall of Fame recently announced its nominees for induction into the Class of 2010, there could have been a number of individuals who felt the same way Hope did, although not necessarily in a joking manner. To me, one in particular stands out, as challenging a selection as there can be. On his resume alone, he should merit serious consideration for Springfield. But he will never, ever, ever get there.

It has been a decade since the player they called ‘The Worm’ graced an NBA court, so he has been eligible for the Hall for some time. But he cannot even get nominated, let alone inducted. Based purely on what he did as a player, he deserves to be in the discussion.

Only one player in the history of the NBA has led the league in rebounding seven times. That man is Dennis Rodman, who did it from 1991-92 through 1997-98. During that time, he played for three different teams, the Pistons, Spurs and Bulls.

Now, the NBA didn’t start tracking rebounds as an official statistic until after such famed glass eaters as Bill Russell, Wilt Chamberlain and Nate Thurmond had either retired or were past their primes. But the NBA Guide does list yearly rebound leaders dating back to the 1950-51 season, using total rebounds as the statistic. And since then, only Wilt has led the league in rebounding more times than Rodman.

Now, consider that Rodman was, at best, 6-7. To do what he did at that height with such guys as Patrick Ewing, David Robinson, Hakeem Olajuwon, Shaquille O’Neal, Dikembe Mutombo and Alonzo Mourning around is nothing short of unfathomable. This is a small forward leading the NBA in rebounding. In 1991-92 and 1992-93 he averaged 18.7 and 18.3 rebounds a game, respectively – in the decade since Rodman retired, no one has averaged more than 15.4 a game. You can make the case with almost convincing finality that there has never been a better rebounder, inch for inch, than Dennis Rodman.

But that’s not all of it, of course. Rodman was one of the premier defensive players of his time as well, a lock-down individual defender who took on all comers (remember him on Karl Malone in the Utah-Chicago Finals?) Twice he was named the Defensive Player of the Year. He was named to the league’s All-Defensive Teams a staggering 10 times, seven as a first-teamer. (By comparison, Mutombo, who has four DPY awards, was, mystifyingly, a first-team All-Defensive only three times. Somehow, in 1995, he won his first DPY, but was voted to the All-Defensive 2nd Team.)

And, let’s not forget, there are the five championship rings in Rodman’s safe deposit vault, or wherever he keeps them. He won two as an instrumental reserve on the Pistons and three more as a starter and sometime reserve for the Bulls. He’d have a sixth if Hugh Evans hadn’t butchered a call in Game 6 of the 1988 Finals.

Isn’t that a career worthy of consideration for Springfield? Of course it is. But we all know why it will never happen – because of who he is, not what he did. Sure, he did some dumb things along the way. So did a lot of others. But the lingering fear among the voters and the Hall folks is that the ultra-eccentric Rodman would show up for the induction ceremony in a Vera Wang gown with Carmen Electra as his presenter. And can you imagine the speech?

No, neither can the people who make the nominations. And that is why we will never see Rodman’s name on a possible list of inductees. He was just too whacky and crazy, to the point where he became a cliché. But he was a pretty darn good basketball player with a really good resume.

Alas, Rodman doesn’t stand alone in the category that, for lack of a better title, should be called “Guys With No Shot Who Deserve A Shot.” I can think of a few others and they, like Rodman, needn’t be spending any time by the phone, waiting for the call.

Jerry Tarkanian: Tark the Shark was one of the great college coaches of the 1970s, 1980s and 1990s. He won an NCAA title at UNLV and then took an undefeated team into the Final Four the following year. He led three different colleges to 20-win seasons in his first year at each institution. But he was at least as well known for his continuing battles with the NCAA and for the rather unpleasant factoid that all three Division I schools got penalized after he left. Then again, he won an injunction against the NCAA and UNLV after the two tried to get him not to coach for violations that occurred before he got there. And he won an out-of-court settlement after suing her NCAA for harassing him. Oh yeah, he also was 778-202 at Long Beach State, Fresno State and UNLV. He’s been eligible for some time and no call is coming.

Eddie Sutton: Like Tark, another ultra successful college coach. But Sutton’s career will be remembered for the infamous Emery Air Freight shipment to Chris Mills while Sutton was at Kentucky. After crashing and burning in Lexington, Sutton got another chance and resurrected his career at his alma mater, Oklahoma State, reviving a moribund program. Sutton became the first coach to take four schools to the NCAA Tournament (Creighton, Arkansas, Kentucky, Oklahoma State) and, after a one-year stint at the University of San Francisco in 2007-08, topped the 800-win barrier. Of the six others with more wins at Division I schools, only one, Jim Boeheim, is not in the Hall. But, rest assured, he will be. Sutton? Not so fast. He also had very public battles with alcohol, but, in all likelihood, it’s the Kentucky scandal that came on his watch that dooms him. The NCAA thought things were so bad that it considered leveling the death penalty.

Ralph Sampson: It’s hard to remember how good Ralph Sampson was a college player in part because his pro career didn’t quite live up to expectations. Then, of course, there have been the unsavory child support issues since he retired altogether. Not good. But the Hall of Fame for players isn’t just for the NBA guys. Or so we think. And Sampson had a remarkable run at Virginia, winning the James Naismith College Player of the Year award as a sophomore, junior and senior. Only Bill Walton matched that. He is the only two-time winner of the John Wooden College Player of the Year award. And it wasn’t like he was a total slug in the NBA. He won the 1984 Rookie of the Year Award. He was a four-time participant in the All-Star Game and the game’s MVP in 1985. He was all-NBA second team in 1985 and led the Rockets to the 1986 Finals, where he is perhaps best remembered for getting into a fight (of sorts) with the diminutive Jerry Sichting. But injuries helped do him in and there was always the sense that Sampson never really, really wanted it. You have to wonder what would have happened to him had he left Virginia after his freshman year and agreed to enter the NBA draft, where the Celtics (with Larry Bird aboard) pledged to take him at No. 1. Instead, Sampson snubbed a furious Red Auerbach and Red turned around and made the trade that brought Kevin McHale and Robert Parish to Boston. Both of those guys are in Springfield.