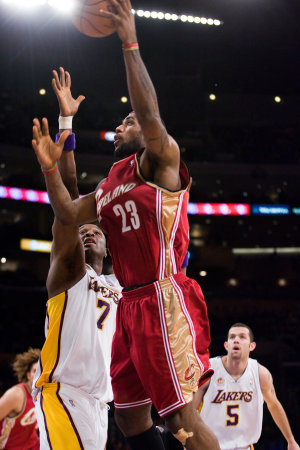 The greatest NBA free agent of all time, LeBron James, is quietly making overtures to the Los Angeles Lakers.

He wants to play for them. And James is not all that concerned whether Kobe Bryant is part of the equation. Bryant, of course, has yet to sign a contract extension with L.A. and could wind up a free-agent himself, albeit one with high mileage.

“LeBron wants to win. He’s a smart guy,” explains one of my best inside sources, a close Jackson associate. “And Phil loves LeBron, absolutely LOVES him.”

There are many, many complicating factors to such a scenario, not the least of which is the fact that it’s way far from certain that Jackson will even be the coach of the Lakers next year.

“The Lakers have not made Phil an offer,” the Jackson source points out. However, rest assured of this, Jackson’s close associate maintained. “Phil will coach somewhere next year.”

Jackson wouldn’t dare take off next year if he’s not coaching the Lakers because he believes the following year will bring a lock-out, the source says. Jackson craves the chance to win another title before the NBA owners lock out the players in 2011-2012 to force a new contract.

“The whole league is under review,” the source points out. “Franchise values are falling, so the owners feel they must force a new labor agreement.”

The lock-out will bring a lost season, and the 64-year-old Jackson doesn’t want to miss two campaigns. So Jackson could wind up coaching Bron with another team next year, such as the New York Knickerbockers.

If all of this sounds fabulous, that’s because it is. These are strange days indeed for the NBA, and for the Lakers, with the planets aligning or converging or whatever with the upcoming off-season. “It feels like there’s a reckoning coming,” the Jackson source said.

If you listen closely, you can hear the heavy breathing and grunting emanating from the Lakers offices beside the freeway in El Segundo. Behind the scenes, folks are wrestling for control of the franchise’s future, if not its very soul.

In other words, they’re partying like it’s 1998. That, of course, is a reference to the last time Jackson played multi-dimensional, high stakes poker with the owners of a team he was coaching.

There are those who think Jackson won that ’90s showdown when he coached the Chicago Bulls to their sixth title in the midst of a very ugly battle for control of the team, then walked away.

But if you ask Bulls superstar Michael Jordan, the experience, in retrospect, sure doesn’t smell anything like victory. Instead, 1998 still clings to his nostrils like the torturous stench of missed opportunity.

If everybody had been a mench, or at least an adult, Jordan could have kept playing for those Bulls and could have kept winning titles until somebody mustered the chutzpah to step up and stop him. As it is, Jordan sort of hangs in the shadows of the NBA these days, a mere ghost of the great competitive spirit that once struck fear everywhere.

I hope Kobe Bryant gets a good long look at him. MJ has always been Bryant’s guide star. They’ve played forthe same coach, in the same system, filled the same role with the same mannerisms and got some of the same results.

Bryant even knows that missed-opportunity aroma, dating back to 2004 when the Lakers blew up a championship steamroller, traded center Shaquille O’Neal and fired Phil Jackson.

Now, after rehiring Jackson a year later, the L.A. franchise has put together another club that could roll to a run of titles, and once again the whole thing is threatened by childish parlor games.

A cynic might say that these are the sort of monopolistic board games that an adolescent Jackson used to enjoy playing with his mother Betty. But you can’t really pin this current Lakers conflict solely on Phil.

He and 76-year-old Lakers owner Jerry Buss sort of deserve each other. They are the two best minds in the NBA, and you knew that eventually they were headed for a showdown for all the stakes, sort of like the finalists in the World Series Of Poker Tournament For All Eternity. For all their success together, Jerry Buss and PJ are just not a good mix. Jackson is “much to himself. He has his own thing.”

Jerry longs for the run and gun days of his 1980s Showtime Lakers teams. But Phil runs the frickin’ triangle, for chrissakes.  “Phil’s just not sexy enough for Dr. Buss,” explains Jackson’s confidant. In all his years, though, Buss has never encountered an adversary like Jackson, who jumped in bed with the owner’s sexy daughter Jeaniejust days after coming to the Lakers in 1999. With that one brilliant move, Phil had Dr. Buss in check.

Soon Jackson was winning championships and charging Buss $12 million a season to do it. Buss has hated paying that much for a mere coach, especially one that was tupping his daughter. His counter move on Jackson was to vest power and control in the hands of son Jim, already a competitor with Jeanie Buss for daddy’s love and control of the franchise. The whole scenario has Jeanie quite upset and telling her friends, “They’re going to do this again. They don’t even care if he wins the championship this year.” Jeanie, of course, is making reference to the 2004 firing of Jackson by Jim and Jerry Buss.

She was particularly angered that Jerry Buss entertained former Laker (and rumored Jackson replacement) Byron Scott into the owner’s suite on the night Jackson became the winningest coach in Lakers history. “Jeanie was really upset by it,” the confidant said. “But Phil took the high road… He said (an agent) put Scott in the owner’s suite so he could get the Clippers job. They wanted to make it look like the Lakers were interested to get the Clippers to bite.”

Jeanie apparently doesn’t buy that. One fabulous scenario has Phil, Kobe and Jeanie all going to the cross-town Clippers in an off-season package deal, but that seems a bit dramatic. The circumstances have left Jeanie with agonizingly divided loyalties. She adores Jackson but feels the ties to her father and brother no matter how much their chauvinism irks her. She is the executive who runs the team, but her father insists on turning the real power of the franchise over to Jim.

In the middle of it all, Jeanie and Jim still hold onto sibling affection, the confidant quipped. “Trust funds make strange bedfellows.” Jackson himself has been quite accommodating of Jim Buss, who travels with the team frequently if for no other reason than to remind the coach of the value of young center Andrew Bynum. Jim Buss believes Bynum is the next Kareem Abdul-Jabbar while the coaching staff would like Bynum to quit pouting about shots and anchor the defense with enthusiasm.

“Phil puts up with it,” the confidant said of his exchanges with Jim Buss. “I was talking to your brother…,” Jackson will tell Jeanie in informing her of events. The wild card in all of this is Bryant himself. Jackson’s camp wonders why the L.A. press hasn’t put questions to Bryant to get him to complain that Jackson is being driven out. Jordan spoke out on Jackson’s behalf early in the 1997-98 season, and that enhanced the coach’s power in his struggle with Bulls chairman Jerry Reinsdorf and GM Jerry Krause.

“Kobe’s the only guy that can press the issue as a Laker,” Jackson’s confidant explained. “What Kobe says will speak volumes. Kobe could go to management right now and say he wants to spend the rest of his career as a Laker with PJ as his coach.” This time around, though, Bryant has kept his own counsel and stayed above the fray. Perhaps he has sought advice from Jordan, who felt let down when Jackson walked away after the 1998 championship. Jordan got into the fight and spoke up for Phil but still lost the balance of his career when Jackson quit anyway.

Bryant certainly knows that the best way to guarantee that Jackson spends another year with the team is to win a second straight championship for the Lakers. That’s chore enough for the team’s star, one that requiresplenty of focus. In the final analysis, that’s certainly the main argument for Jim and Jerry Buss bringing the speculation to an end. Jackson has brought them lots of money and value with his wins. Saving $7 million a year with Byron Scott is nothing next to what they’ve gained with Jackson at the helm.

In Chicago in 1998, Jackson and the Bulls rode all the speculation and tension to a title. But there are doubts that will work this time around. Yes, the Lakers are holding their own at the top of the Western Conference, but as Jackson’s source pointed out, “It’s incredible how miserable they seem winning.” That in itself may clear up Bron’s future as well. A title in Cleveland means he likely stays put. A title in L.A. could turn the quiet overtures into serious negotiations.