The Sports Guy can't do it worse

The Sports Guy can't do it worse 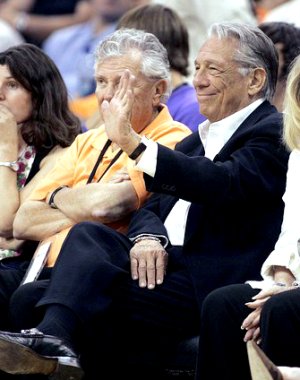 There’s an opening in the NBA right now which comes with bells, whistles and numerous red flags: the general manager spot for the Los Angeles Clippers.

On one hand, it’s one of 30 such jobs in the best basketball league there is, albeit one that is headed full steam for a work stoppage next year. On the other hand, it’s a job where you’d have to report to the two men who have presided over what can charitably be called a spectacularly humdrum quarter century of hoops in Los Angeles: Clippers owner Donald Sterling and his henchman, Andy Roeser.

So, naturally, the Usual Suspects will be mentioned for the post. (Jerry West has already said ‘no thanks.’) And, as we all know by now, there is likely to be a grass roots campaign for the position from ESPN’s Sports Guy Bill Simmons. He did it in Minnesota. Why wouldn’t he do it in his adopted hometown for the team to which he openly admits – courageously, in my view – that he has season tickets?

Of course, the Clippers won’t bite, although they have a long and storied history of making decisions that border on the ridiculous. (Mostly, they involve coaches coming and going while Sterling, Roeser and, until recently, Elgin Baylor, all sat together with Alfred E. Neuman ‘What Me Worry’ buttons on their shirts.)

But you have to admit it would put the Clippers on the map, although for all the wrong reasons. If Sterling ever wants the Clippers to be taken seriously, something he’s still working on in his third decade of stewardship, by the way, then hiring a wisecracking sports guy with no basketball experience would seem to be counter-productive. But Simmons could always appeal to The Donald’s soft side – $$$$ – by offering to the do the job for free for a year (which was his offer to Minnesota) and then go away when the nuclear summer settles over the league in July 2011.

There was a time when Sterling might actually go for something like this. Not that long ago, he did offer a basketball operations job to a national NBA writer, who decided against it. I mean, you’d have to work for a man who in a sworn deposition said he did not participate in basketball matters, something a number of his former coaches would openly dispute.

I still have in my possession a letter from Sterling that is more than 20 years old, thanking me for my coverage of his team (even though I was covering the Celtics at that point for the Hartford Courant) and letting me know he’d be glad to help me with anything down the road. I didn’t take that to mean anything more than just a polite way to end the letter. Back then, Sterling would invite us to join him at halftime to chat at courtside. He even took telephone calls from us.

It isn’t unheard of for a member of the media to cross the line and move into sports management. In the old days (and I mean well before Simmons was gleam in his father’s eye), reporters used to do double duty as public relations men for the teams they covered. The newspapers didn’t have a problem with that back then. The reporters liked cashing two checks.

The man who got the Timberwolves GM job, David Kahn, started as a reporter for the Los Angeles Times and then the Portland Oregonian, covering the NBA for the latter. He eventually left the biz, landed a gig at NBC Sports and then as an assistant GM with the Indiana Pacers, where he played a big role overseeing the construction of Conseco Fieldhouse, still the best NBA venue in my opinion. He stayed active in the league (particularly the D-League) after leaving Indiana and then talked Glen Taylor, the Wolves’ owner, into hiring him. Then, he quickly let go a guy he used to occasionally cover – Kevin McHale.

Another successful media-to-management case is that of Marty Hurney, the general manager of the NFL Carolina Panthers. He covered the Washington Redskins for various Washington-area newspapers until he was hired by the team’s PR department. He subsequently moved into the management area with longtime NFL executive Bobby Beatherd and eventually landed a job running the Panthers. In three years, he oversaw a team that went from 1-15 to making the Super Bowl.

Then there’s Chris Snow, who left one of the plum assignments in sports writing (as long as you are single and don’t have a life) of covering the Boston Red Sox for the Boston Globe to work in hockey operations for the NHL Minnesota Wild.

On the other side, I’m told that a number of media members in South America have moved over to soccer operations – with so-so results.

We in the media generally feel we could handle the job of running a franchise, but really pay attention only a couple times a season: at the trading deadline and at the draft. That’s when the GM’s work is open to public scrutiny, so we feel compelled to weigh in. But there are a lot of scouting trips to Tuscaloosa and Las Cruces that the good GMs make more than once. And then there are the agents.

You’d have to admit, if the Clippers did give Simmons a shot, the news conferences would be fun. You’d start seeing ‘Lost’ references in every Clippers story. There would be an assistant GM going by the name of House. There’d be humor. There’d be chatter about the Clippers, something Sterling desperately desires.

And, let’s face it, there’s history on Simmons’ side. As in, how could he, or any of us, do any worse than what has already been done up to now?