Danny Granger: "If I was LeBron, I'd go to New York"

Danny Granger: "If I was LeBron, I'd go to New York" 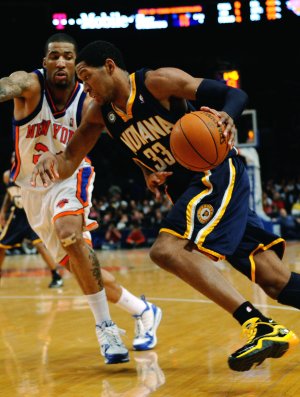 The Pacers are headed to the lottery, but nobody can accuse you of tanking it. You have had some exceptional games in recent weeks, including a 32-point performance against Denver and a 30-point outing against Phoenix.

Danny Granger: You got to finish the season out. You have to play hard until the last game. You want to finish your season strong.

What has motivated you to stay focused, especially when your team isn’t in the playoff hunt?

Before the season, the Pacers were considered a viable Eastern Conference playoff contender. What went wrong?

DG: We lost a few guys to injuries, and we never really developed a consistent offense. Our offense has been below par for most of the season. And our defense hasn’t been great, either. Last year, as funny as this may sound, our defense wasn’t great but our offense really kept us in a lot of games. This year we haven’t played well on offense or on defense and that’s two really bad things.

How frustrating has this season been for you?

DG: It’s been very frustrating. Extremely frustrating. Overall, we have a plan as an organization that we want to accomplish in the next two or three years. I think this year was a minor hiccup, but I think we’re looking good for the future. We got a young team. We’ll have a chance to do a lot of good things in a couple of years.

The Pacers will to have a very high pick in the NBA draft. If you were the general manager of the Pacers, who would you select?

DG: Honestly, you’d want the No. 1 pick and, if we had the No. pick, I’d take (Kentucky point guard) John Wall. I think he’s the best player in the draft. There’s some other good players in this draft: Evan Turner (a guard from Ohio State), the big kid from Kentucky, DeMarcus Cousins … But I would still take John Wall.

Do you think there is a specific positional need for this team?

DG: We can improve in a lot of different positions. As far as the draft goes, you never look for a draft pick to come in and make an immediate impact. But with a high draft pick, I think you do. And, if you ever have the opportunity to get the No. 1 pick, you got to take the best player in the draft, regardless of his position.

Looking into your crystal ball, which teams are going to be in the Finals?

DG: I see the Lakers and Cleveland.

Who is your sleeper pick for the Finals?

DG: Denver. Across the board, they are probably one of the most talented teams. They got four guys who could be an All-Star in any given year. Whether they get it all together, I don’t know. But they’re talented.

And who would be your MVP selection?

DG: I’d have to go with LeBron. Without him, they (the Cavs) probably wouldn’t win that many games. But with him, they are pretty much unstoppable. I think he’s one of the most unstoppable forces in the NBA.

Speaking of LeBron, do you think he’ll stay in Cleveland or bolt to New York?

Why the Big Apple?

DG: New York is the media mecca as far as endorsements and being able to expand your personnel net worth. The exposure you can get there isn’t only nationally but globally. New York does all that for you.

You aren’t likely to be going anywhere soon, having signed a five-year contract extension with the Pacers in 2008. But do you plan on going back to college and finishing your degree in civil engineering?

DG: I do. I talk about going back to college every now and then. I would like to do it. I definitely want to pick it up again after I’m done playing basketball. It’s just one of those fields where, if you haven’t done it for 15 years, you probably got to go to school all over again for it.