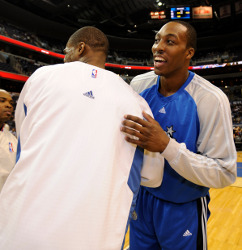 I had the enjoyment of watching the Magic Johnson and Larry Bird documentary the other day on HBO. I was laughing in agreement at a comment Bird made in reference to Magic. He told a story about how Magic was in a tunnel waiting for Indiana State to finish a practice before the 1979-80 NCAA championship game. He said he knew Magic wanted to come to speak to him before they left the floor, but that he wanted nothing to do with him and walked away to the amazement of Magic.

He also spoke about how he enjoyed the despair Magic was immersed in after having a subpar championship series in 1984 and wished it would kill him in a joking manner, while feeling vindication for his poor performance during that college loss to Magic.

Bird said, “All I could think about was Magic in the other locker room with his head down in anguish while I was holding a championship trophy.”

I find that laughable and real. That’s why I loved Bird – because he had no fake in him. He was an assassin and he took pride in destroying your confidence on the court if he could.

I had two memorable run-ins with him. The first was my first start as a rookie in the Boston Garden. He walked out for the jump ball and asked out loud who the (expletive) was going to try and guard him that night? Once he realized it was me, he immediately walked over and told me that he was going to destroy me – which he did with ease.

The next encounter was the following year, but I was a different player and was having a breakout year. I happened to be in one of my zones and was berating Bird all game long when he told me all I could do was score. The next play I gave him a head fake, popped him in the mouth and drew a foul. While I was shooting the free throw, I said out loud, “I can make you bleed too.”

He tried like heck to get me back the rest of the game, but didn’t succeed.

I thought it was over when I was in the safe haven of the locker room, but to my amazement I looked up and Bird had come in to hand me his hotel room key. He looked at me and said, “Why don’t you come over and we can finish what you started?”

I said I wasn’t going to do that so him, Kevin McHale and Robert Parish could beat me up. He started laughing and said, “We will finish this next year and I will not forget.”

I knew right then that Bird could have played on any playground where I grew up in Chicago and hold his own. Why? Larry Bird knew how to talk trash. I remember when he was wearing out Julius Erving and talking smack. Dr. J got upset and started to choke him. Bird responded with a right-handed punch.

That boy was bad.

He had entered a league dominated by African-Americans thinking he could mix it up and talk smack with any of the guys. And then back it up. He had instant respect because that was the poster boy of the league (Julius Erving!) he was trying to punk.

We had fun back in the day talking smack. We needed to stimulate ourselves back then because crowds were small and everyone pretty much had similar contracts. We competed hard against each other because come contract time, general managers were quick to compare us to similar players. So we had to outperform players who supposedly were making the type of money we wanted during free agency.

I hated every opponent I played against and I never crossed half court to visit or speak with a friend. We just did not attempt to fraternize and coaches despised the sight of it.

So why is there such a lovefest going on every time I watch a pregame warm-up and a game? The playoffs are getting ready to start and I get geared up to support my favorite team, but in the same instance gear up to cheer against teams I don’t want to win.

What turns me off is when I get to the game, I want focused warm-ups and players staying on each end of the court. But what I see is some players from teams talking, hugging and laughing. That sight makes me nauseous.

I want smack talking and comments in the paper. I want chest bumping and hard fouls. I want the officials to feel like at any moment something might break out. I want tension. I don’t want players to pick an opponent off the floor and I don’t want players smiling or communicating with opponents during the game.

I am old school. Although change is a normal function of life, I just don’t want opponents liking and respecting each other on the court. Off the court, I have no problem. It’s just a game, but on the court I want more Larry Birds.

If you play golf with me, I will tell you honestly that I hope every shot you hit goes out of bounds. I do not tell you “Great shot” and I do not give putts outside 10 inches. I played basketball and I would never consent a breakaway layup and say forget about finishing the shot, just drop the ball because I know you were going to make it. I will give you the necessary strokes to make the game even. After that, it’s a game. I want to win and after the round, I will buy you lunch with your money. They say golf is a gentleman’s game. Well, I am being honest and that’s as nice as I will get until we are done.

I could not understand why the media seemed so interested in LeBron James walking off the court last year without congratulating the Orlando Magic. Oh, so after the Magic players and fans beat him up, berated him and then sent him home, they felt it necessary for him to turn around and say congratulations?

Basketball is his life. When you lose, you go home and sulk, get better and think about redeeming yourself the next year. You don’t think about going to hug a guy that’s jumping up and down having a party at your expense. What you do is go take a shower, sulk and get your emotions in order. Then, if inclined to do so, go to their locker room and congratulate the victors.

Now I agree that you never do what the Pistons did to the Bulls in 1991 by walking off the floor as a team before the game was over. That was poor sportsmanship at its finest.

I never saw the Lakers or Celtics congratulate each other during those great championship series. Whoever lost just left the floor in a hurry and no media member ever said a word. Now it’s a problem when Peyton Manning walks off the field after losing the Superbowl.

The AAU has made the players in basketball soft and in turn the media has followed suit. Before the AAU, we just heard stories about other great players. Because of the AAU, NBA players have been playing against each other since birth. So I understand the lovefest, but I don’t have to like it.

The playoffs are coming up and I am excited. I want all coaches to pull a Pat Riley and stop the fraternization before games. Maybe the league needs to drop a curtain down the middle of the court and lift it when the game starts.

Or maybe just have Larry Bird go speak to every team before the season ends and show them how it’s really done!