On the comeback (to Europe) trail?

On the comeback (to Europe) trail? 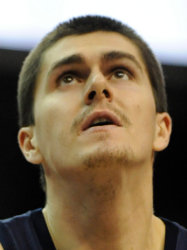 Darko Milicic has not been the only No. 2 pick not to pan out in the NBA. Milicic, though, has been singled out more than any other in recent history because of the company he kept in his draft. LeBron James, Dwyane Wade, Carmelo Anthony, Chris Bosh, Chris Kaman and Josh Howard, all first-round picks like Milicic in the impressive 2003 class, have combined for 24 All-Star appeareances seven years later.

Milicic, meanwhile, has not even had 24 double-doubles in his NBA career.

That’s too shabby for the much-hyped Serbian center, who was projected to be the next big thing coming from the other side of the Atlantic early in the past decade, when selecting promising but untested Euro players was the trend in the league.

The 7-foot Milicic, just like Nikoloz Tskitishvili or Yaroslav Korolev, didn’t meet the expectations. In his case, though, they were oftentimes overwhelming.

“He’s going to own the game,” late Pistons scout Will Robinson said back in 2003. “We’re going to have to build a new arena. The only thing that could destroy a kid like that is a woman.”

Or maybe a coach.

Milicic has often blamed Larry Brown, who coached him from 2003 to 2005 in Detroit, for some of his shortcomings in the NBA. He played just 551 minutes in two years and a half with the Pistons, which greatly held back his development and maybe forever hurt his confidence and focus.

“Larry Brown was not my favorite coach,” Milicic told HoopsHype.com. “He didn’t like me and I didn’t like him. He’s not a bad coach, but he wasn’t good to me.”

While Brown didn’t help his progress, that still doesn’t explain why Milicic – after a successful short stint in Orlando in the months leading up to free agency – wasn’t able to deliver in Memphis, where he signed a three-year, $21 million contract and went on to average just 6.3 ppg and 5.2 rpg, or New York, where head coach Mike D’Antoni put him to even less use than Brown.

Things are looking up a little bit for Milicic, still just 24, after February’s trade to Minnesota – to the point that he’s now leaving the door ajar to possibly staying in the NBA after openly stating that he was heading back to Europe after this season.

“I don’t think I’m going to change my mind, but you never know,” Milicic said. “Stuff happens that you don’t expect to happen. For me, I’m just looking for one consistent season where I can play the same kind of minutes all season long and not be just a bench guy. Right now, I think that’s going to happen in Europe. I want to be part of a winning team. And besides, in Europe every game is a must-win game. I like that pressure. Here’s different. There’s a lot of games and only the playoff games matter. The rest of the season, what are you playing for?”

Kurt Rambis, the rookie coach of the non-playoff bound Timberwolves, is one of the reasons why he’s enjoying the experience in Minnesota a little more than his previous stops.

“He’s adjusting because it’s his first head coaching job in the NBA,” Milicic said. “He’s got a lot of new players on the team, a lot of young players. But he’s a good coach. He got the chance to be an assistant to Phil Jackson, so you know he’s been able to learn from the best. He’s a guy that’s been able to inspire us. There’s good stuff coming from him.”

Whether we get more good stuff coming from Milicic in the NBA remains to be seen. At this point, more than any other thing, he sounds like a player looking to be embraced.

“The country doesn’t matter,” Milicic said. “I just want a team that trusts me and has a goal – winning a championship, making it into the Euroleague, whatever. I just want to enjoy playing basketball.”