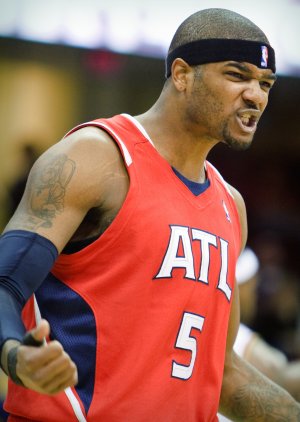 The Atlanta Hawks aren’t sending out thank you cards, but they certainly have to be tempted.

By refusing to select Hawks star forward Josh Smith to the NBA All-Star team last month as a reserve, Eastern Conference coaches just may have done the Hawks a huge favor.

Since his All-Star snub, Smith has been a man on a mission, playing with a Rock of Gibraltar chip on his shoulder.

“I felt like I deserved to be an All-Star,’’ the soft-spoken Smith said. “I played extremely well to get on the team.’’

Countless people agreed with Smith as his cell phone seemingly rang non-stop for the couple of days after they learned he wouldn’t be in the All-Star Game in Dallas.

Smith said his family was particularly incensed and that he had to “calm everyone down.’’But that was a facade.

Beneath that supposedly cool exterior, Smith was a raging inferno. He couldn’t wait to get back on the court and prove all of those Eastern Conference coaches wrong.

Smith candidly acknowledges the All-Star rejection still gnaws at him and it remains a motivating tool – just like he says it has for Milwaukee Bucks center Andrew Bogut, who was similarly bypassed for the All-Star team.

“There were two ways I could have dealt with this,’’ Smith said. “I could have just laid down and not played with the same enthusiasm or I could go out and try to prove everybody else.

“And that’s what leaders do. I wanted to come out and show people I should have been an All-Star.

“If you’ve seen my numbers since the All-Star break, they have increased. They’re like Bogut’s; they’ve been through the roof, too.’’

The numbers are indeed impressive. To wit:

Offensively, the 6-foot-9 Smith has registered six 20-plus point games, including a 29-point outing against Golden State and a 27-point performance against Minnesota.

Defensively, Smith has posted eight games of 10 or more rebounds. He grabbed 17 against Golden State, 18 against Chicago.

That’s a far cry from before the All-Star break when Smith went through all of December without once recording a double-digit rebounding effort.

Smith’s stellar play hasn’t gone unnoticed by Hawks coach Mike Woodson. He fully recognizes Smith’s importance to the Hawks, who are battling Boston for the third seed in the Eastern Conference playoffs.

“He’s been so good for our ballclub,’’ Woodson said of Smith, who has the distinction of being the only player in the NBA to average more than 15 points (15.7), eight rebounds (8.8) and four assists (4.3) this season. “He’s helped us to be in the position we’re in today.

“I mean, without him, we wouldn’t be in this position.’’

It’s certainly a nice position, but not one that Smith is content with. “J-Smoove’’, a nickname given to him by his friend Courtney George while growing up in Powder Springs, Ga., is firmly convinced the Hawks have all the ingredients to be a championship-caliber team.

Smith knows his sentiments aren’t shared by many of the so-called experts, who contend the Hawks aren’t in the same class as Cleveland, Boston and Orlando.

But Smith said he doesn’t particularly care what their perception is of the Hawks.

“It is a little irritating when I do hear that, but I usually try to tune everything out,’’ Smith said. “That’s what’s good about this team: we’re so down for each other.

“We’re like a family and don’t pay attention to what they’re saying in the media. That’s why we’ve been so successful.’’

Smith fully expects the Hawks to be more successful. After losing in the second round of the Eastern Conference playoffs last season, the 24-year-old Smith has his sights set on the Hawks faring even better this season.

“We want to get to the conference finals and then the Finals,’’ Smith said. “We want a ring.

“We’re not just trying to get past the second round this year and say, ‘That’s cool.’ Nobody would be satisfied with that on this team.

“We feel we have the depth and talent to do big things this season. We’re going into the postseason with the mindset of winning a ring. Everybody on this team is hungry for a title.’’