Has Bosh checked out?

Has Bosh checked out? 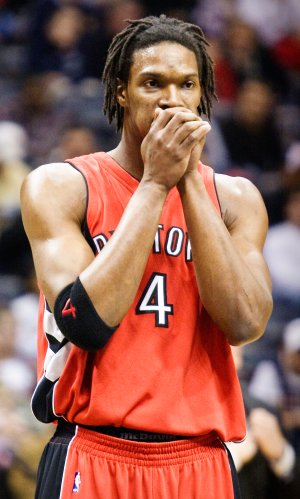 It’s a dangerous path to go down, that of questioning a player’s motives, effort or heart. No one but a player himself truly knows if he is giving it his all or stopped caring long ago. When a player goes into a slump, is it due to him quitting on his team? Or is it due to some nagging physical ailments hindering his performance? Or perhaps it can just be chocked up to plain old fashioned luck rearing its ugly head?

So to say a player’s poor performance is due to lack of effort or him mentally “checking out” is a tricky thing to pull off.

This becomes even more of a difficult accusation to pull off when the player is having a career year and is getting his team 24 points and 11 boards a night. But that is the situation the Toronto Raptors’ Chris Bosh currently finds himself in.

And when you check Bosh’s stats broken down by month they back up the writer’s thoughts:

So when Bosh’s team needs him the most – in their current struggle to hold onto the eighth, and final, playoff spot in the East, the star’s production is falling off. Bosh is also getting to the charity stripe three times less per game in March than the rest of the year – it’s this apparent lack of aggression that is leading some pundits to accuse Bosh of bailing on the Raptors.

Sports fans are more than willing to heap out love (and, subsequently, money) to an athlete as long as he appears to be working hard and giving it all he has. It’s a two way contract – the fan rewards the athlete with his time and money and the athlete rewards the fan with his blood, sweat and tears all in the name of victory and entertainment.

But if the athlete doesn’t hold up his end of the bargain, the athlete-fan relationship goes bad real quick. And there is no quicker way to accomplish this than by an athlete putting forth a sub-par effort (or appearing to do so). This is never more true than in Toronto, a hockey city to its core. Torontonians want their athletic heroes to be tough, hard workers with a no-nonsense attitude. It’s why athletes like Jerome Williams are still revered in the city – they may not have been the most talented players, but they never cheated the fans or the game.

It is also why Bosh has been so beloved in Toronto. “Tough”, “hard worker” and “no-nonsense” are all words used to describe the 26-year-old Bosh. The Dallas native has caused no scandals in his seven years with the team and has been a well-spoken, intelligent and modest star the franchise has been able to build around. That is why all this talk of Bosh tanking it seems to be a little premature. In fairness, he hasn’t been healthy much since after the All-Star break. And it was Bosh who recently lambasted his teammates for their lack of effort.

Is this really a case of a player giving up on his team, or are injuries playing a factor? Or is it just the natural ebb and flow that pretty much all player’s experience during a long season. To an outsider looking in, these would appear to be more legitimate explanations for his play of late rather than it being a case of him tanking it.

But, if you are a longtime Raptors’ fan, the thought of Bosh quitting on the team is totally believable. You see, the Raptors have a rocky history with their star players. Damon Stoudamire and Tracy McGrady both had ugly exits out of town and were both Public Enemy No. 1 in T.O. anytime they took the court in the visitor’s colors. But nothing compares to the case of Vince Carter, the best Raptor of all-time and the reason Bosh is getting all of the grief he currently is.

Yes, despite leaving town over five years ago, Air Canada Carter still casts a large, dark cloud over this franchise. Despite signing a long-term contract with the team, Carter decided he wanted out of town in 2004. And most observers agree that he tried to expedite this process by giving, how should we say, “less than 100 percent effort” for the Raptors that season. In his 20 games in T.O. in the 04/05 season, he put up very un-Vince-like numbers of 16 points, three boards and three assists per game.

So are Chris Bosh’s bags packed and does he have one foot out the door already? Has his frustration at his teammates’ effort and play caused him to quit on his team? Unless you are inside Bosh’s, brain those questions will remain unanswered. But, as the old adage goes, “winning fixes everything”, so if the Raptors’ star can get the team back on the winning track and into the playoffs, all will be forgiven and forgotten.

That is, at least until he signs with another team this summer.