See you in Paris

See you in Paris 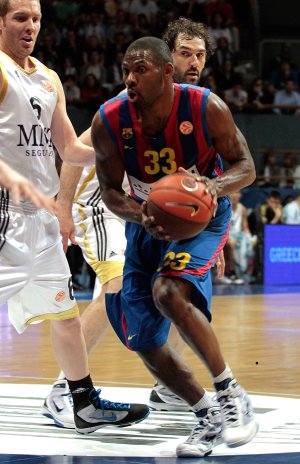 As some of you may know, we finally got to the Euroleague Final Four to be played in Paris next month after beating Real Madrid 3-1 in the quarter finals.

I think we improved our defensive level as a team. They are so difficult to stop because they’ve got so many guys that can go one-on-one… Pablo Prigioni controls the whole game. One of the keys to their success against us was Pablo running the screen-and-roll to perfection. He did it with Tiago Splitter in Vitoria, now he’s doing it with Ante Tomic.

Tomic proved that he can score almost 20 points in every game against one of the best teams in Europe… Unbelievable to do it at such a young age. We did things to slow him down and still scored. Overall, his talent and ability to get better and his potential are very high.

Also, I have to talk a little bit about Sergio Llull. What I’ve seen this year, he still has the speed, but his shot is so much better. That’s a big sign that he’s been working on his game. He has been so much confident shooting the ball during the series. So I can see those two guys playing in the NBA.

It seemed like a shock to people when we lost Game 2 at home. But it wasn’t really a shock for us. We knew how good Real was. It was more of a shock about how bad we played. You have to give them credit.

We’ll meet CSKA in the semifinals. It’ll be a little different matchup between Barcelona and CSKA. First of all, I’m happy that we got two of their players, Terrence Morris and Erazem Lorbek. With Ramunas Siskauskas leading CSKA, it’s going to be a great matchup at the three spot. They are proven winners. People say we’re the favorite but in a Final Four anybody can be the favorite. You still have to play the game. We’re gonna relax right now and focus in the ACB. Coach Xavi Pascual will have us ready to face CSKA.

In this kind of tournament – like the March Madness, Copa del Rey, Eurolague Final Four – it’s all about the mentality: being the first to hit, the first to be physical, being aggressive from the first minute. In this series we learned a lot about the first minutes of the game. The game we lost Real Madrid played unbelievable in the first quarter.

Xavi said the game was over after the first quarter. Why? Because you can’t play catch-up basketball with great teams! Madrid, CSKA… They have great players just like we do. You can’t play down 11 points or sobecause you spend so much energy coming back. That’s why if you have the right mentality, like every game is the last of your life, you have a great chance to win. Every player went to the max in the fourth game. Guess that’s why I picked up so many fouls, being so aggressive.

Some people say the fourth game was the best Ricky Rubio has ever played in the Euroleague. I think what he did good early was get to the basket. Something that he wasn’t doing so much. He was getting to the basket, drawing fouls and getting a lot of confidence. If he gets close to the basket, Ricky can finish with both hands, it doesn’t matter. This is a big key for his game. I really like to see him so aggressive.

Now we have to focus in the ACB, and it’s easy when you have so many important games coming ahead. It’s more than a month till the Final Four and now we have to face Manresa this weekend and Real Madrid again! Right now, we’re on course to make history and I’m looking forward to do that. With our team, it’s easy to stay focused.

There’s a lot of talk about how the recent losses of the Lakers. Sometimes during the season, bad streaks happen. Teams will have to beat the Lakers in a seven-game series, and they have a lot of experience. You’ll see the Lakers play great. Kobe being Kobe, Lamar Odom will step up. Then Pau Gasol will dominate the post. For me, he plays the best defense on Dwight Howard. He was a big key on defense last year vs. Orlando and people fail to remember that. They still are favorites to win it all, although I picked Boston at the start of the season…

About the Arenas case, I wouldn’t rule a guy like him out in the free agent market. He’s the most popular player in the DC area. That sells jerseys. You lose more money not paying him. If he had gone to jail that would be a different situation… Flip Saunders is a pretty good coach. I’ve heard that from players who played for him. Once they get the the right players and the right chemistry, the’ll be back in the playoffs next year.

That’s all for now!