No LeBron is not the end of Worlds

No LeBron is not the end of Worlds 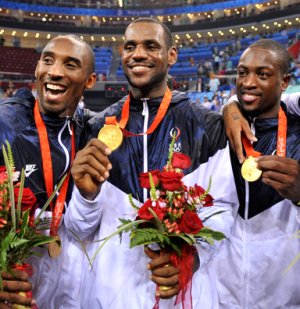 Personally, I think future archeologists will date the decline of the American empire to the discovery of two state-of-the-art basketball arenas in Charlotte, N.C., built at taxpayer expense, 17 years apart.

At that point they’ll conclude, like Chief Dan George in Little Big Man, these people did not know where the center of the world was.

Of course, there are other alternative theories…

We take you now to the first annual reunion of the Redeem Team.

Jerry Colangelo: “It’s great having everyone together again. Coach K is taking time away from his busy schedule, reviewing applications from McDonald’s All-Americans. Kobe skipped a day of working out in his homel gym, although I hear he has free weights on his jet. LeBron…

“Has anyone seen LeBron?”

Carmelo Anthony: “He’s not here, Mr. Colangelo. He said to tell you he wanted to be here but he has to decide his future this summer, and, also make a movie.”

No, LeBron James won’t play at the FIBA World Championships in Turkey this summer.

Colangelo, the former Suns owner who runs the U.S. team, isn’t happy about it, telling Yahoo’s Marc Spears there are “no free passes” to London in 2012, and anyone who drops off now “without a legit issue, they do it with an understanding of the  risk.”

Kobe Bryant has said he will, but said subsequently the broken finger on his shooting hand may require surgery.

Coach Phil Jackson has said he hopes he won’t, as he hopes Pau Gasol won’t play for Spain.

Not that Jackson is completely callous about international  participation. If Sasha Vujacic wants to play for Slovenia, Phil’s cool with that.

So much for our days as basketball’s shining beacon on the hilltop.

“And if he or any other of the Redeem Team's key performers think that they can slink away without it making a difference, well, they weren't paying much attention to that last game. THEY ALMOST LOST THAT ONE, if not for the will of Kobe Bryant, who is – strange as it seems – getting old.”

If you think we have trouble, think of the havoc wreaked on Canada by Steve Nash, who stayed home in 2007 when they tried to qualify for Beijing.

You could go three in a row, like James and the core of the  2008 U.S. gold Medalists, something no NBA star had ever been asked to do.

A lot has changed, for the better, but there’s a price to pay for it.

The program Colangelo rebuilt, or invented, was a masterpiece, rivaling anything he did in Phoenix, which included putting up the two buildings that pumped life into their sleepy downtown, making the Suns a power and winning a World Series with the Diamondbacks.

Colangelo made it cool to play in the Olympics. Best of all, he insisted they conduct themselves like professionals after years of chest-pounding arrogance, starting with the notorious “Dream Team II” at the Worlds in Toronto in 1994.

Of course, preparation now involves three-four weeks of practices and exhibitions, however it’s broken up, before the two-week tournament.

Even worse than the embarrassment when the Mike Krzyzewski-coached, LeBron-led U.S. finished third in the 2006 Worlds in Saitama, Japan, they still had to qualify to the Olympics in the 2007 Tournament of the Americas.

Fortunately for the U.S., Venezuela, the designated host, had to cancel due to civil strife or Colangelo might have been in the D-League looking for players.

The U.S. and NBA were able to buy, er, get FIBA officials to put it in a site a little closer to home, Las Vegas.

Then came last summer in Beijing, complete with 10-day exhbition tour in Las Vegas, Macao (not that anyone complained) and mainland China.

Now, even after winning at Beijing, the U.S. must qualify for the 2012 Games in London in Istanbul.

FIBA would kill to have the U.S. stars participate. Actually, all it has to do is give Olympic medal winners an automatic berth in the next Games. The U.S. should finish 1-2-3, most of the time, anyway.

Whether we can win without our very best remains to be seen. Almost all of them were at Saitama – Bryant was hurt – and Greece upended our well-prepared butts.

On the other hand, as long as the U.S. is professional and respectful, I can handle anything else.

It’s the same for us as it is for soccer aficionados in countries where the game means more than it does here who’ll have to deal with losing to improving U.S. teams.

I was in Seoul in 1988 when the USSR beat our last team of college players. I still have the boxscore the Soviet coach, the late great Alex Gomelsky, signed for me.

I was in Barcelona in 1992 when the Dream Team dazzled and charmed everyone, with opponents asking to have pictures taken with them after every rout.

I was in Toronto in for the 1994 Worlds when the NBA’s “Young Guns” AKA “The Young Assholes” put on a crotch-grabbing, chest-pounding, trash-talking show. Opponents quickly stopped asking to have pictures taken with them and the Dream Team Roman Numeral Designation was discontinued.

It was lose-lose for U.S. players- They could never live up to the exploits of the living legends on the Dream Team and knew they had to win or be haunted forever.

Even a player as nice as Vince Carter could turn into a preening ass at Sydney in 2000.

Whatever happens, Colangelo will make sure future teams live up to the Redeemers, at least in the time they put in and the way they comport themselves. If James, Wade and Bryant aren’t in Istanbul, we’ll just have to make do with Kevin Durant, Chris Paul, Deron Williams, et al.

Have a nice summer, ‘Bron.