Miami sizzling down the stretch

Miami sizzling down the stretch 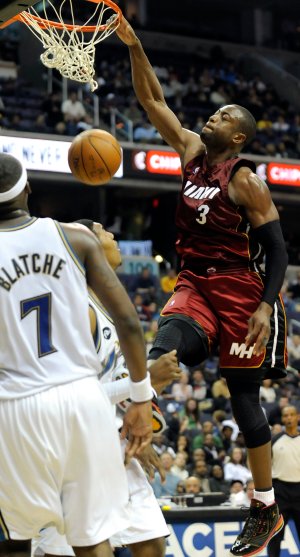 While Cleveland and then Orlando clearly remain the teams to beat in the East, the Heat has picked an opportune time to be playing their best basketball of the season.

In fact, as the playoffs roll around, nobody is hotter than the Heat, which won its ninth consecutive game with a 99-95 victory over the visiting Philadelphia 76ers on April 7.

It would be hyperbole of the highest measure to suggest the Heat could repeat what they accomplished in ’06, but one thing for sure is that few teams will relish playing Miami this postseason, especially in the first round.

It appears as if the Heat’s first-round opponent will likely be either Boston or Atlanta and nobody would call it a monumental upset if the Heat dispatched either team. There is still a chance that if Miami could also face Orlando and if the Heat won a series with the Magic, that would indeed qualify as an upset even though the two split their regular season series.

Last year, Miami lost in seven games to Atlanta in the opening round and the Heat are clearly a better team now. (So is Atlanta, while Boston remains an enigma. The Celtics have the ability to get to the conference final or be eliminated in the first round).

This season the Heat dropped all three games to Boston, none by more than seven points. Miami also was 3-1 against Atlanta.

Even though the Heat was winless against the Celtics, the last time the two played was Feb. 3.

Miami is a much different team now, although the Celtics maintain the edge in both the frontcourt and at point guard.

A Miami-Atlanta series could go either way.

The main reason why Miami is a feared team is the obvious one – the presence of Dwyane Wade.

In March, Wade was the NBA’s Player of the Month and he has continued his dominance in April. Wade dropped 43 points on Indiana in a 105-96 road win on April 2 and added 39 at Minnesota in a 97-84 the next night.

After leading Miami to the NBA title in 2006, Wade battled injuries the next two seasons, missing a total of 62 games. Last year he played in 79 games and this season he has appeared in 74 of the first 78.

When he is healthy, Wade remains one of the five best players in the NBA and if it weren’t for a certain player in Cleveland, he might be a viable MVP candidate.

Also in the backcourt, Miami is receiving a rebirth from journeyman Carlos Arroyo, who has had 61 assists and just 12 turnovers in his previous 12 games. Second-year player Mario Chalmers has been inconsistent at the point, but Wade is able to cover plenty of deficiencies.

Miami’s frontcourt of Quentin Richardson, Michael Beasley and Jermaine O’Neal has also been inconsistent. All three players have enjoyed their moments. Beasley (14.7 ppg, 6.7 rpg) is the most puzzling.

At times, he looks every bit like the player selected No. 2 in the 2008 draft and a future All-Star. At other times he has disappeared.

O’Neal is past his All-Star years, but this season he has remained relatively healthy (for him), missing just 10 of the first 78 games. His averages (13.6 ppg, 7.1 rpg) are basically at the Beasley level.

Richardson is the type of player who isn’t helping the team if he can’t hit from long-range. Among rotation players, he is shooting a team-best .395 from beyond the arc and shooters are difference makers in the postseason when the games tend to become half-court affairs.

A person who has lit a fire into the Heat has been Udonis Haslem, who has recorded 19 double-doubles off the bench this year. Haslem provides some much-needed toughness.

Dorell Wright has the ability to provide instant offense off the bench, but as with many of his teammates, consistency has been a problem. Wright hit four treys and scored 19 points in the recent win over Philadelphia, showing his obvious bright side.

Whether the Heat are playing over their collective heads, or can sustain their stellar performance is the big question. However, with Wade at the top of his game, which is a level few can reach, at the very least, Miami has the ability to at least win a first-round matchup. Less than two months ago, this wouldn’t have been considered a viable option, but now the Heat will present plenty of problems for any opponent.