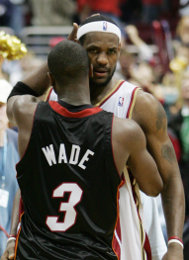 The 2009-10 regular season has just ended and I am gearing up for the second season. But first let me get the ever popular Top 25 list out of the way. It is only fitting that I rankle a few nerves as we start the most popular run of any professional sport – the NBA playoffs.

Yes, King James is still No. 1 and I expect to be criticized again by the Laker fanatics. We have a few new entries into the list. I know I will get opinions about Monta Ellis, Aaron Brooks, Tyreke Evans, etcetera… Just remember there are only 25 players listed here and no doubt those players are extremely close, but not there yet!

Smith is the most versatile defensive forward in the league. He can change a game on both ends with lightning speed. His ability to elevate and block shots as well as tip-in dunks around the basket is a tremendous weapon. He should have been an All-Star this season and should have a breakout playoff season for the Hawks.

I listed Rose as one of my most disappointing players at mid-season and he just threw it back in my face. Making the All-Star team was the best thing that could have happened to this young player. He has taken over leadership of the Bulls and propelled them into the playoffs. He is quickly becoming one of the best penetrators in the game and could soon be one of its top defenders as well.

I really dislike watching Garnett run up and down the floor nowadays. He has aged because of injury and it has to be really frustrating him to no end. Message to young players: It does not matter how old you are when you come into the league. When the odometer starts turning on your NBA career, that’s when your basketball life starts to expire. People wonder why Grant Hill can still fly at 37 after being around so long. It’s because he does not have the miles after missing so many seasons due to injury. Garnett still is very viable and with a day’s rest in between games can become extremely productive in the second season.

Pierce is definitely not the same player we saw the last few years. Nicknamed The Truth – and rightly so -Pierce must hear the truth from me: Drop some pounds and you can have a few more successful years. When you get older at skilled positions, your weight becomes a serious issue and speed and quickness start to leave. His ability to get to the rim and finish has diminished drastically and that has affected Boston’s ability to control tempo late in games.

Parker’s frail body has taken a beating over the years. Being one of the top scorers in the paint has taken a toll. I still think he is the best penetrator in the league from the point guard position when healthy. The Spurs will upset the Mavericks if Parker has a big series.

Improved scoring numbers, but poor shooting didn’t impress me. I judge Billups in one area more than others and that is leadership. He drops three spots because I was amazed that they could not hold it together without George Karl. The credit went to Billups when they excelled last year. Well, then he must be blamed when they failed to hold on to the No. 2 seed in the West.

Here is another first-timer on the Top 25 list. Wallace is not your prototype small forward, but he gets it done with extreme hustle. He is one the league’s best defenders and rebounders and that is why the Bobcats are in the postseason for the first time.

Rondo was the best player this season for the Celtics. He is a walking triple-double every time he takes the court. Rondo does everything for the Celtics and unfortunately for him he will never be allowed to lead the Big Three. He is a Top 25 first-timer and should be here for a while.

What? Yeah! Take Kidd away from the Mavericks and they are toast. He improved his shooting tremendously and still is one of the best passers, defenders and rebounders at the point guard spot.

Johnson moves up two spots because he has evolved into not only a consistent scorer, but a leader as well. The Atlanta Hawks are flying under the radar, but that will change because I expect them to get to the conference finals against Cleveland. There is not one shooting guard in the East that can deal with his physical presence. That allows Johnson to get any shot he wants come crunch time.

Roy had another superb year when he was healthy, but I am starting to suspect what he has is an 8-to-10 year NBA body. That does not bode well for the Blazers and head coach Nate McMillan. Roy is the focal point of their methodical offense because he can create when the shot clock is running down. I still would like him to play more off the ball and that might save him from getting beat up on a consistent basis.

Bosh stays in the same spot because the Raptors struggle when he has huge numbers. The Raptors were a huge disappointment and Bosh has to take a lot of the blame. They seem like a leaderless team and that falls back on the star.

Drops nine spots and it’s only because he is wearing down. The effort is still there every night and he is still one the smartest players in the league. The Mavericks are in trouble. Duncan, who has played deep into every season since he has been in the league, is going to exploit them with fresh legs. I am so glad the Suns did not have to play them again in the first round…

Gasol drops two spots and probably should be further down. I definitely did not like his body language and demeanor. He complained too much about not getting the ball – especially when it came to Kobe. I love his abilities when he is focused and I expect him to shine in the second season.

Injuries cost Paul this year and that is why he drops five spots. That’s the only reason he moved down. He is still the ultimate leader and the same player that I had ranked sixth in the preseason. The Hornets suffered without him despite good play from their rookies. I can’t wait to see him back healthy and ready next year.

When Nash won back-to-back MVPs, a lot of pundits couldn’t believe it. Do you believe now? This person breeds victories and enhances individual’s games. If you don’t believe me, go ask Channing Frye and Jared Dudley. This is the most unselfish point guard we have seen since Magic Johnson and the best shooter in the history of the game. He has proven it by shooting 50, 40 and 90 percent from the field, three-point range and free-throw line the last four years. He moves into the Top 10 from 19.

I just love how he plays the game. Deron is the strongest pure point guard in the league. Every time I watch him play, I get madder and madder at Illinois coach Bruce Webber for holding him back. I believe he could have averaged 30 ppg in college. He will effectively shut down Chauncey Billups in the first round and keep him in foul trouble. He will become the best point guard in basketball in the next few years.

You can not dispute the all-around offensive game Anthony brings every night. He is a bruiser and finesse player wrapped in one. Has the best footwork of any small forward in the league, which allows him to get a good look despite the defense. He moves up three spots despite the late season struggles of the Nuggets. He will destroy the Jazz frontline in the first round, but will it be enough without the leadership of George Karl?

Nowitzki is in that same category as Wade. He does everything right and at a consistent rate, but we always want more. When you are 6-foot-11 and your go-to move is a post-up at the free throw line, people always second guess. He is quite frankly the best shooting big man we have seen since Larry Bird. The Mavericks might have the deepest team in the West, but it all starts and stops with Dirk.

The best move Phoenix did not make has turned into pure gold. I have watched Amare up close his whole career and I have never seen him play like he has since the All-Star break. He has without a doubt been the best player in the league since mid-season. He is the true And 1, the best finisher in basketball, and that is why he jumped six spots.

The best defender and rebounder in the league every year he laces them up. His lack of aggressive behavior on the offensive end dropped him two spots. If he ever gets mad, he might become this generation’s Bill Russell.

This individual is the best scoring machine I have seen in a long time. He makes the biggest jump since I have been doing the Top 25 list. At this rate, he will be considered the most versatile offensive player in the history of the game. Will win the scoring title for the next five years unless LeBron decides to challenge him.

Wade is like all the great players that were caught in between Magic Johnson, Larry Bird and then Michael Jordan. He is this era’s Karl Malone when it comes to not getting his just due for what he has done. Wade has Miami playing at a high level and I would not be surprised to see them beat Boston in the first round.

Kobe is mentally the toughest player in basketball. People have no idea how tough it is to play with a banged up finger, especially on your shooting hand. The Lakers are struggling, but Kobe has a way of carrying his team until they get back on track.

Back-to-back MVPs solidify King James’ stronghold on No. 1. He is well rested and poised to lead Cleveland to its first ever championship.