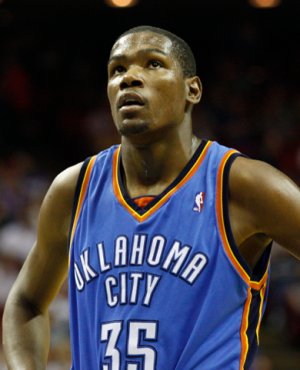 The Lakers welcomed Kevin Durant to the second season in Game 1 and I am sure he will never forget it. Scoring has been so easy for Durant this year that surely he felt it would continue without a blip. The Lakers and Celtics are the two best teams in the NBA at loading up defensively and if you do not make adjustments, it can turn into a nightmare.

Durant just experienced what quite possibly Scott Brooks and the great Maurice Cheeks, who is an assistant coach for the Thunder and owner of an NBA ring, were trying to ready him for… That he is a wanted man to the highest degree and he has the Lakers extremely fearful of what he can do to them.

Every home team except the Suns won in game 1, but not all of them will advance. Phoenix could possibly win four in a row and still close it in five. The mental agony of the roller coaster ride of the playoffs can wreak havoc with your emotions and take you to a place that will have you playing like you just learned the game a week ago. The one word we will hear throughout the playoffs is “adjustment”  and that is what is on the mind of the youngest top scorer in the history of the NBA.

The Lakers controlled Durant and won game 1, but they did not stop Durant by themselves. Nobody has all year. There were many reasons why he struggled and I have five ways in which he can turn it around and give his team a chance to even up the series.

Jackson’s defensive plan, the poor play of Jeff Green, Nenad Krstic, James Harden and Thabo Sefolosha’s and the team’s inability to adjust the game plan were all reasons why Durant struggled offensively against the Lakers.

I am sure the Thunder watched what the Celtics did to Dwyane Wade and that fact should have alerted them to what was going to happen to Durant. Both players love to catch the ball above the free-throw line and preferably in the middle of the court. I understand the dynamics of approaching it in this manner. Durant can see the defense more clearly and players will be hesitant to run and trap him when he can see the entire floor, he can get into a pick-and-roll and he has the option to go left or right – which Durant is extremely effective at doing.

I get it and agree that it has worked flawlessly for 82 games, but one monkey wrench thrown into the mix can blow it up. In this case, a few things happened.

First and foremost, Phil Jackson knows better than anyone how to adjust to teams trying to shut down a top scorer. He has coached the two best scorers from the perimeter in the history of the game – Michael Jordan and Kobe Bryant.

Let’s go down memory lane for a second. Remember how the Pistons led by Isiah Thomas, Bill Laimbeer and Joe Dumars loaded up on Jordan and squeezed him to a pulp? The Jordan Rules became a staple when it came to the Pistons eliminating the Bulls for a few years. The Bulls seemingly could never get over the hump and find a way to counter what the Pistons were doing to negate Jordan and Scottie Pippen offensively… Until Tex Winter and the triangle offense were finally received and accepted by Jordan.

This could be a repeat of that process because the Thunder is undoubtedly the team of the future and the Lakers will definitely be contending the next three to four years.

Winter was Jordan’s savior, but who will be Durant’s? Will it happen in this series?

The Thunder coaching staff definitely has the tools because they are watching film and defending against the triangle offense. I know they cannot throw out their offense in one game, but several things need to happen and maybe we will see Durant explode in Game 2.

1. They need to start a fire on the frontline to occupy Pau Gasol or Andrew Bynum. They just had three fouls combined in 60 minutes of play.

Green and Krstic were a combined 7-for-17 from the floor, grabbed only one offensive rebound and were a negative 25 points while on the floor.

Their struggles allowed Gasol and Bynum to hang around the paint and negate Durant from having a clear path to the rim. This allowed Ron Artest to pressure Durant without the fear of him getting to the basket for easy opportunities.

They have to get some opportunities early with post-ups and two-man game opportunities with Durant on the weak side. It is imperative that they become offensive threats.

2. James Harden and Thabo Sefolosha have to be a threat to make Bryant and Derek Fisher stay at home and not wander defensively.

Kobe and Fisher are excellent defenders off the ball and getting into the passing lanes, so knocking down three-point shots will eventually force them to stay on their man – especially in the fourth quarter when Durant can take over.

3. Adjust and create some catches for Durant below the free throw line so they cannot see him at all times and load up defensively to offer help.

Run him off down screens, back screens, put him in post-ups… What Durant has to realize is he can’t pass up the first open look off of those maneuvers. During the season he could get greedy and explore for more, but in this series – until his teammates convince the other Lakers defenders to stay home – that second opportunity will close up fast and he will be forced to pass, take a tough shot or turn the ball over.

I guarantee you Artest will tire quickly having to chase around screens on a consistent basis for 40 minutes. That will start to force switches and opportunities for teammates to get opportunities that did not exist in Game 1.

Durant is playing into the Lakers’ hands if he decides to keep arm wrestling with Artest to free himself. That is what Artest wants him to do and he is the best in the league at using his 5 fouls to stay in the game.

Finally, go watch film of what Kobe did to Artest last year during the Rockets series. He caught the ball below the free throw line within 18 feet, but not before he ran Artest off of a series of back picks and down screens in the triangle offense.

4.  Force a mismatch on the perimeter for Durant.

Take a play from the Atlanta Hawks playbook.

Mike Woodson uses Mike Bibby or Jamal Crawford to screen for Joe Johnson in the two-man game offense. This forces the switch and so Johnson has the height and strength advantage to create shots.

Forcing Fisher to guard Durant would open up a can of worms the Lakers would have to adjust to in a hurry. No way Artest goes under the pick-and-roll with Durant.

5. Force Artest to search for Durant in transition.

This is a gamble, but I believe it would work. The Thunder should think about having Durant guard Fisher and put Russell Westbrook on Kobe and Sefolosha on Artest.  Why? Because now Durant will be guarding a perimeter player, so in transition he could get to the post and Artest would not be able to switch back – thus locking Fisher with Durant.

The Thunder have proved they can win on the road and Game 2 is the best game in the series to accomplish the feat. But it will not happen if Durant has another poor offensive output. They need to make the right adjustment.