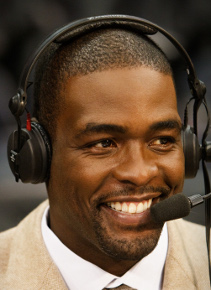 Was your plan all along to work in the media once you were done playing basketball?

Chris Webber: Well, it was my plan. I didn’t know what part of the media, but I had a great opportunity to get on TNT to commentate and that was one of the biggest blessings you can get post-basketball. I’ve always aspired (to do this), but I really didn’t know where or what I wanted to do. I thought maybe I would commentate in Detroit, but I just really wanted to stay in basketball. I always liked the media, even though sometimes they didn’t like me… I always knew it would keep me close to the game. So it’s something I had always thought about while playing.

CW: To me, it’s great. Working with Barkley, Kenny (Smith) and EJ (Ernie Johnson) is like a dream. Growing up, Barkley was one of my favorite players and I modeled my game after his. His personality, how silly and cool he is, his knowledge of the game… It’s a really cool environment. Best thing about working for TNT is that it feels like I’m still in the locker room. It’s great to work with Charles. You might not be able to get a word in, you might get joked about all the time, but it’s a lot of fun (laughs).

What do you think is the key to having staying power on TV?

CW: One, you have to be knowledgeable. You have to know the game. I’m blessed that I played 15 years in the game and I just retired. Two, you have to be fun. You can’t speak down. You have to be informative, but you have to be entertaining. It’s not easy for me. I’m not the funniest guy, but it’s easy to be funny when Charles says one of the the ridiculous things that he says and I can go back at him and make my point. Third, you have to have a great host and working with EJ has made my transition from basketball to commentating really fun and easy. He’s taught me a lot. I would say being knowledgeable, entertaining and having a guy like EJ makes it a lot easier.

Would you like to do anything on TV outside of NBA stuff or sports?

CW: Yeah, I actually have a few things going on outside of sports on TV, a few projects. In the future, hopefully in the coming year, we will have some things on that are not just basketball.

Some guys are into reality shows. There is a rumor that Dwight Howard might be doing one this summer. Are you into those type of programs too?

CW: No, I’m not into reality shows with myself. I’m working with some other people working with their shows and helping them put some things together. As far as me, I’ve been kind of private. I like to keep the privacy of my family.

You know Robert Horry was asked once if he would trade his career, with all those championship rings, for Charles Barkley’s and he said ‘yes’. Would you trade yours for  Horry’s?

CW: No. I really respect the guy, he really could play… But no, I wouldn’t trade my career for his. God gave me my talents for a reason. I think you have to be very fortunate to win six rings. You have to be a role player on a team with two Hall of Famers, like Kobe and Shaq or Hakeem Olajuwon and Clyde Drexler, and a Hall of Fame coach too. I just think he’s very fortunate. A lot of guys have had to play without the talent around that he’s had. Look at KG. He didn’t win it till he got the chance to play with two Hall of Famers like Ray Allen and Paul Pierce. I wish I had a ring, but I really understand that you can’t get a ring by yourself. I was kind of put in the position Charles was.

Do you think you took too much criticism during your playing career?

CW: Yeah, I took a lot of criticism. But that’s what sports is about. Everyone has a right to their opinion and I have the right to have mine. You’re never as good as they say, you’re never as bad as they say. You have to take it with a grain of salt. When I played, I used all the negative criticism as energy to try to become a better player. I don’t know if I got criticized too much. I really don’t think about it.

What do you think when you see Juwan Howard playing at the level he’s played this season at his age?

CW: I’m not surprised. Juwan taught me how to be professional in college, with his working attitude and how hard he played and the attention to detail. So I’m not surprised that Juwan could play three of four more years. He’s that type of guy and I’m happy for him.

Do you think you would still be playing today without those injuries?

CW: I always thought I could go to 38 and still be playing, so maybe I lost three years. But it was a wonderful run and 15 years is a lot of time to play in the league. I was blessed, but definitely I could have played more if not for the injury.

Do you miss playing?

CW: You know what? I don’t. I’m at peace. The injury was so long and it took so long to come back… My last two years I didn’t play up to the level I wanted to play because of my knee, so I just really understood it was my time to go. I don’t miss it. But probably the main reason why I don’t miss it is because of the chance to work for NBA TV and TNT. A lot of players say what they miss the most is the camaraderie with the guys in the locker room. I don’t miss the travel. Don’t miss it at all. Getting at the hotels at 3 in the morning… I do miss joking with the guys and the families and friends and the relationships that you build.

Who’s your favorite to win the NBA title?

CW: I can’t go against Cleveland. Cleveland with LeBron James, the way he’s playing is incredible. He’s just doing some awesome things. I gotta tell you: The Magic are right on their shoulders. They are the most talented team top to bottom. But I just have to go with Cleveland because of LeBron.

And, in your opinion, who’s been the most disappointing team in the playoffs so far?

CW: I would have to say Dallas. All the hype and talk after the trade about the re-energizing of the team… For them to lay an egg in Game 2 and then kind of cry and complain and talk about who needs to play… If I’m Dirk, I’m thinking, “You know, this is my team. Don’t come here and mess this up and cry. We need to focus.” I feel for Dirk because he’s one of my favorite players, but they have been disappointing. For them to be No. 2 seed team losing to a seventh seed and being dominated like they’ve had by San Antonio, it’s disappointing. I also have to say Denver has been very disappointing too. I think Utah is going to win that series.

Do you think it’s because they are missing George Karl or there’s something else?

CW: You know, I love George Karl. He’s a great coach. But even with him coaching, I just think the personalities on that team and the chemistry on that team are not built for a championship. They have too many erratic guys that you don’t know what are going to bring day-to-day. Having one great scorer in Carmelo is not enough. I haven’t believed in Denver at all just because of the makeup of that team. They are not one of my favorites. It doesn’t have anything to do with Karl. I think it has to do with the players because he’s done such a great coaching job over the past two years that all that should be still instilled in them. You have to put the responsibility on the players for not coming through like they should.

Do you have any plans in the near future to get involved in management or coaching in the NBA? Maybe being a part owner?

CW: Yes, I do. Right now, I’m talking with some GMs and I actually thought I wasn’t going to return this year to TNT because I thought about taking a position. But right now I’m enjoying this. I get to see a different side of basketball and it gives me a little bit of space. But in the next couple of years, I think I will take that step to a managerial position.

Do you think you belong in the Basketball Hall of Fame?

CW: That’s a tough question. Of course I’m going to say ‘yeah’. I’ll just leave it at that. I really don’t want to campaign for myself. But yeah, I believe so.

Do you think you are going to make it?